For the first time ever, a court in Sweden has put one of the Iranian regime’s officials on trial on the charges of war crimes and murder. The issue under investigation specifically relates to Hamid Noury’s role in the massacre of political prisoners in 1988 in Gohardasht Prison in the city of Karaj, west of Tehran.

In 1988, Khomeini issued a fatwa based on which all political prisoners who supported the People’s Mojahedin Organization of Iran (PMOI/MEK) and who maintained their loyalty to the organization were hanged. Some 30,000 were executed in a matter of a few months, most being members and sympathizers of MEK.

Rewarded for his crimes in prison, Hamid Noury had been promoted from being an IRGC member to a deputy prosecutor in the Gohardasht prison. According to the witnesses, Noury was specifically responsible for leading people to a location in prison, where they were executed. He personally executed a number of them. The massacre followed a fatwa issued by Khomeini that all PMOI/MEK supporters who remain “steadfast” in their loyalty to the organization must be executed. That edict specifies the names of members of the “death commission.” They are Hossein-Ali Nayyeri, Mostafa Pour-Mohammadi, Morteza Eshraghi, and Ebrahim Raisi, the current President of the regime.

Noury’s Arrest
Noury, was arrested upon his arrival in Sweden in November 2019. A few days after his arrest NCRI obtained a recorded conversation between Noury’s former boss in prison and another official, in which his former boss said I told him not to travel to Sweden because there is a plot to arrest him. It is also suspected that he might have been leaked by rival faction within the regime’s security and intelligence apparatus.

However, the regime has been working hard to deviate the judicial proceedings by injecting some of its agents as witness, disguised as opponents of the regime. However, the strong presence of the MEK in the case has so far thwarted the regime’s plot.

Indictment and the trial
On July 27, 2021, after 21 months of investigation, prosecutors at the District Court of Stockholm issued an indictment against Hamid Noury. His trial started on August 10 and is expected to end in April 2022.

In the course of the investigations, the members and supporters of the MEK, who were witnesses to Noury’s crimes, testified before the Swedish authorities and provided ample evidence and documents. Most of the 35 plaintiffs in Noury’s case are MEK members and supporters. Many witnessed Noury in the corridor of death in Gohardasht prison, where prisoners were lined up to be taken to execution hall. The investigation was supervised by the Senior Public Prosecutor, Kristina Lindhoff Carleson. The indictment reads in part:

Iran’s Supreme Leader Ayatollah Khomeini… issued a fatwa / order shortly thereafter that all prisoners in the Iranian prisons who belonged to / sympathize with the Mujahedin and who were faithful / loyal in their beliefs should be executed. Shortly afterwards, mass executions of supporters / sympathizers of the Mujahedin who were prisoners in the Iranian prisons began.

Between July 30, 1988 and August 16, 1988, Hamid Noury, as assistant prosecutor or other similar role, in cooperation and collusion with other perpetrators at Gohardasht Prison in Karaj, Iran, executed a large number of prisoners who were members or sympathizers of the Mujahedin.

What makes the trial more significant is that the new president of the regime, Ebrahim Raisi, was one of the four members of Death Commission in Tehran in 1988 and personally sent thousands of prisoners to the gallows. Raisi, in his first press conference after becoming president, took pride for his role in the massacre.

Unprecedented decision to move to Albania
In an unprecedented action, on October 26, the judge announced that the full court in Stockholm will move to Durres, Albania, for two weeks, reconvening on November 10, 2021. The decision was made to facilitate hearing testimonies of seven MEK members residing in Ashraf 3, who were considered as key witnesses in this case.

Testimonies by the seven witnesses from Ashraf 3, who are providing firsthand information about the atrocities and mass executions that occurred in Gohardasht, shocked the court.

The proceedings were widely reported by the media, especially by several Persian language broadcasting and in Albania. The judges were particularly impressed by precision and the detail with which the witnesses from Ashraf-3 provided the information on the 1988 massacre. A Gohardasht prison replica made by Ashraf-3 residents was taken to the court in Albania and used to provide a visual sense of events in Gohardasht prison to the prosecutors the judges, and the lawyers.

The Iranian regime’s reaction
Noury’s case has been so important for the Iranian regime that its Foreign Minister had to raise his concern in a meeting with the Swedish Foreign Minister on the fringes of the UN General Assembly in September. Hossein Amir-Abdollahian told his Swedish counterpart that all the documents provided to the court are fabricated and provided by the MEK.

Thousands of political prisoners were massacred in Gohardasht Prison in the summer of 1988, based on a fatwa (religious decree) by the then Supreme Leader Ruhollah Khomeini. None had been sentenced to death but were summarily hanged only because they remained steadfast in their beliefs and ideals.

Location: Gohardasht
Prison is approximately 50 acres and situated northeast of Karaj. On the south and west side, the prison extends all the way to foothills of Alborz Mountain range in the north and east. Gohardasht Prison is easily visible from the Qazvin Highway due to its white and high wall. This Prison has several gates, but the main gate is located on the west side of the Prison, separated from the city by a boulevard. 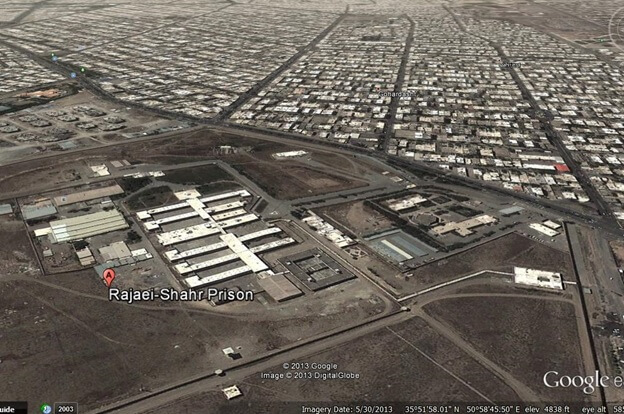 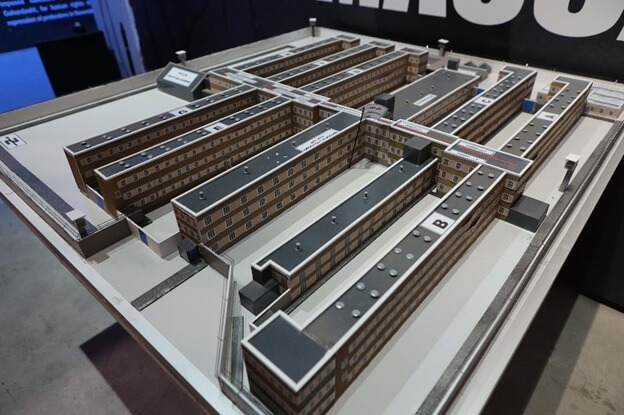 History: The construction of Gohardasht Prison began in late 1976, during the Shah’s dictatorship, and was about 75% complete at the time of the anti-monarchic revolution. In late 1980, Khomeini’s regime allocated a budget to complete the Prison. By September
1982, the Prison building was complete and ready for operation. Subsequently, many prisoners of Ghezel Hesar and other prisons were transferred to Gohardasht.

Gohardasht Prison Replica as presented in the Court Room: 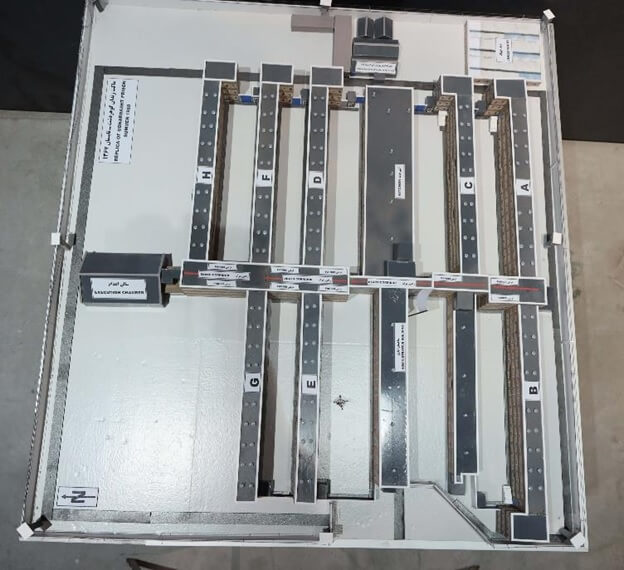 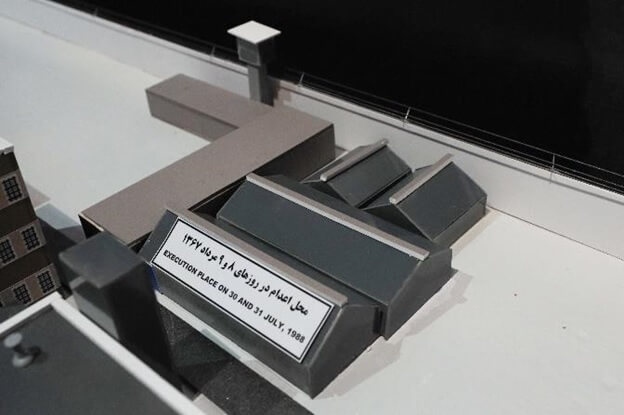