Join the Virtual Conference on Iran

WASHINGTON, DC – The Organization of Iranian American Communities (OIAC) will host its first ever nationwide virtual conference. Hundreds of access points across 40 states will join an online video conference, while many more will watch the live streaming of the event on the Internet and on social media platforms.

The conference will focus on the victims of repression in Iran as well as those who have lost their lives due to the COVID-19 pandemic, largely as a result of the criminal indifference, utter incompetence and systemic corruption of the clerical regime. Amid the pandemic, the regime has heightened its external aggression, testing of missiles, and support for regional proxies, threatening neighboring countries.  Meanwhile, the theocracy has escalated executions, arrests of dissidents, and murders of prisoners.

The virtual conference will call on the international community to step up pressure on the Iranian regime, activate the snap back mechanism, and reimpose all UN Security Council resolutions to impede the Iranian regime from further suppressing the Iranian people as well as threatening the world. 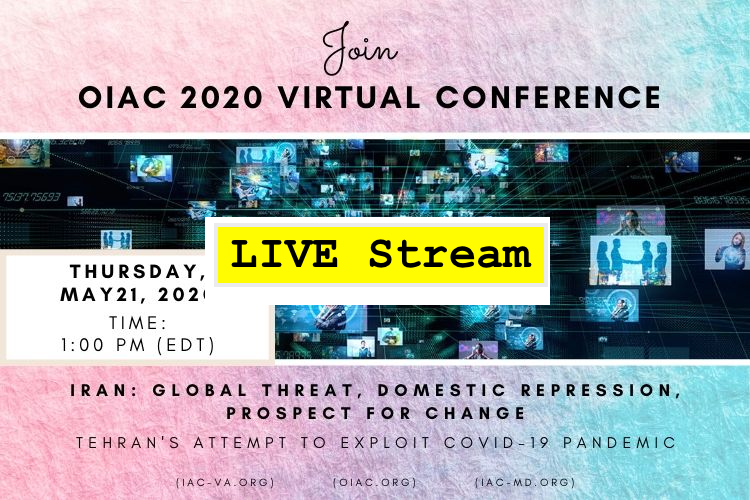 While the world is consumed with fighting the pandemic, sadly, Iranian regime has directed most of the European aid for severely affected Iranian citizens to the proxies in Iraq and Lebanon, France government speaker reported. And recently expelled Doctors Without Borders assistance team while having over 40,000 COVID-19 fatalities.

Cunningly, Tehran reports a fraction of the true figure to hide incompetency of the corrupt, inhumane regime. In this regard, 166 prominent Iranian American medical professionals and health workers send a letter to President Donald Trump. They said: “The much-needed humanitarian aid should only be provided directly to the people of Iran and not the regime.”

On April 9, 2020, Amnesty International’s Deputy Regional Director of MENA said, in the report.
Iran: Prisoners killed by security forces during COVID-19 pandemic protests   “It is abhorrent that instead of responding to prisoners’ legitimate demands to be protected from COVID-19, Iranian authorities have yet again resorted to killing people to silence their concerns”.