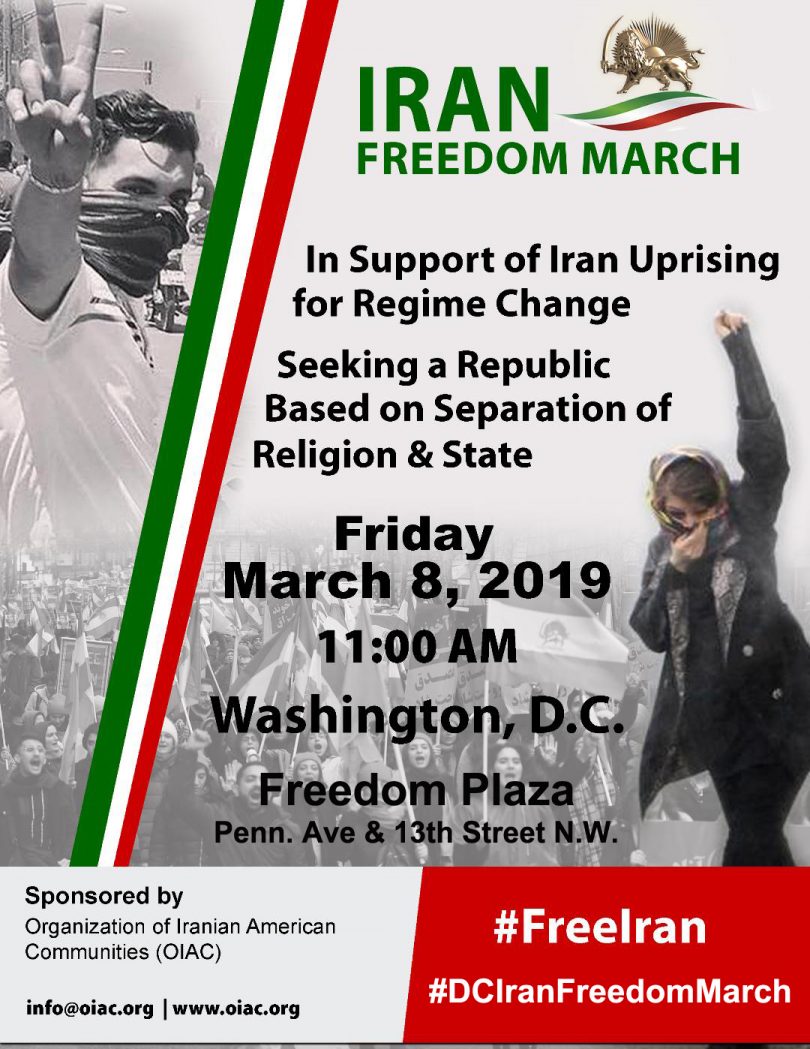 MEDIA ADVISORY
March 4, 2019
CONTACT: Majid Sadeghpour
PHONE: 202-559-9232
E-MAIL: events@oiac.org
WEBSITE: www.oiac.org
Iran Freedom March in DC
Iranian-Americans Rally for Firm Iran Policy, Urge Support for Nationwide Uprising
WASHINGTON, DC – Thousands of Iranian-Americans from across the United States will hold a rally and march from Freedom Plaza to the White House to voice strong support for the nationwide uprising in Iran for regime change, and the establishment of a democratic, secular, and non-nuclear republic in Iran.
WHAT: Iran Freedom March (#DCIranFreedomMarch)
WHY: To urge the U.S. Administration to recognize the Iranian people’s right to overthrow the ruling religious dictatorship in Iran and declare support for the 10-point Plan for the future of Iran, articulated by Maryam Rajavi, the President-elect of the National Council of Resistance of Iran.
WHEN: Friday, March 8, 2019, 12:00 PM
WHERE: The rally and speeches will begin at Freedom Plaza (Penn Ave & 13th St., NW), followed by a march to the White House.
WHO: Organization of Iranian American Communities in the U.S. (www.oiac.org)
MEDIA RSVP: events@oiac.org
Delegations from many states will also reach out to their representatives and senators to highlight the need for Congress to stand with the people of Iran in their struggle for freedom and democracy.
The Organization of Iranian-American Communities is an all-volunteer, non-partisan and non-profit organization which represents the network of Iranian-American organizations in 40 states. OIAC advocates for a democratic, secular and non-nuclear republic and therefore supports the 10-point Plan of Mrs. Maryam Rajavi, the President-elect of the democratic coalition National Council of Resistance of Iran. OIAC does not support a foreign war to bring about change in Iran, nor does it support an appeasement policy to the detriment of people of Iran.