Event to call on US to hold Ebrahim Raisi Accountable

On Monday, September 20, 2021, a bipartisan panel of distinguished policy and political figures participated in a conference organized by the Organization of Iranian American Communities and its many chapters, including New York, New Jersey, California, and Texas. The conference speakers and participants urged the U.S. to take a leading role in a U.N. backed investigation into the 1988 Massacre of 30,000 political prisoners in Iran. Held a day before the Iranian regime’s president Ebrahim Raisi gave his first speech at the UN General Assembly, they underlined Raisi role in the 1988 massacre and underlined the necessity to hold the regime to account. 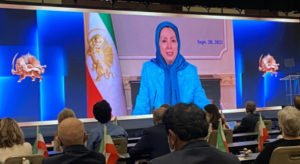 In her speech, Mrs. Maryam Rajavi, the President Elect of the National Council of Resistance of Iran urged, “the United States, the European Union, and its member states to refer the dossier of human rights violations in Iran to the UN Security Council. Such a measure will enable the UN to arrange for the international prosecution of Khamenei, Raisi, and other regime leaders for committing four decades of crimes against humanity and genocide.”  “We want the world to recognize the right of the Iranian people to overthrow the regime,” she said. 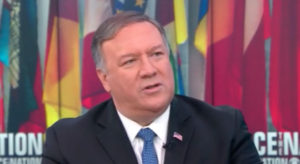 Michael Pompeo, the 70th U.S. Secretary of State also addressed a wide range of Iran policy related subjects and reiterated the need for the U.S. and the international community to support democratic aspirations of the Iranian people.  He demanded that Ebrahim Raisi be prosecuted for crimes against the people of Iran.  Make no mistake, Mr. Pompeo said, “Ebrahim Raisi, himself, is personally responsible for the mass execution of thousands of Iranian political prisoners, names of over 5,000 have been published. The bodies of these brave men and women were dumped in unmarked graves. And Because Iran has never, and likely under this regime will never allow an investigation into these killings, we do not know the true number of Iranians who were murdered.”

Mr. Pompeo referenced protests in Iran during the summer of 2021 and noted, “protestors, these amazing freedom-loving people have shown considerable resilience and bravery in resisting the regime. And I know that in the end the Iranian people will have a secular, democratic, and non-nuclear republic.” Mr. Pompeo then called the 1979 revolution in Iran a, “key turning point” and said, “To understand Iran and its rightful place in history we must unpack what happened in 1979. I think this is why Iran will never return to rule by a dictatorial Shah or theocratic regime.”

In his remarks, Former Senator Doug Jones (D-AL) said conference participants, “are continuing the drumbeat for the UN and the world to know that by allowing Raisi to speak on a world stage the UN is turning a blind eye to over three decades of mounting evidence regarding Raisi’s rise to power through repression and injustice and his role in the execution of literally thousands of political dissidents dating back to the 1988 Massacre.” He also reminded policymakers that, “there is a blueprint for change and an alternative to theocracy” in Iran. He added, “Mrs. Maryam Rajavi has introduced a Ten-Point Plan for the future of Iran,” which, “calls for the universal right to vote, free elections, and a market economy.  Her plan advocates for separation of church & state; gender, religious, and ethnic equality; a foreign policy based on peaceful coexistence, and a nonnuclear Iran.”

Former Senator Kelly Ayotte (R-NH) said Raisi, as head of Iran’s judiciary in 2019, also “presided over hundreds of human rights violations. And in November of 2019, when we saw so many peaceful protestors take to the streets throughout Iran, throughout the country, all walks of life, what did he do? As head of the judiciary he condoned the shooting and killing of 1,500 of those innocent protestors by the regime’s forces.”  U.S. policy toward Iran should not only reimpose tougher sanctions she added, but also ensure that it stands, “resolutely for the basic human rights of the Iranian people.”

Ms. Deborah Lee James who served as the Secretary of the U.S. Air Force during the Obama administration said in her remarks, “I join with you in calling upon the UN General Assembly to refer the matter of the 1988 massacre and other Raisi crimes–to the Security Council and to conduct an official investigation into this heinous genocide and crimes against humanity.” She expressed, “hope that the United States will play a leading role in this charge and I hope that interviews with survivors in Ashraf 3, Albania will be part of the official record.  For who better to bear witness to all that happened 33 years ago.”

It is so many years since the genocide in Tehran, said former Senator Robert Torricelli (D-NJ) in his remarks, suggesting that the coming months will provide for, “a decisive moment for the leadership of the Western alliance. What is the price of justice? Do we forget genocide for a trade deal, for an investment, even for a treaty?”   He said justice takes time but, “Justice found Milosevic, it found the Nazis, it found Pol Pot. It will find Raisi.”

Hundreds of Iranian American community leaders and families of the 1988 victims were in attendance, a number of whom gave passionate speeches outlining their experiences in Iranian regime prisons and of Raisi’s crimes.

In moving remarks, Dr. Firouz Daneshgari, a renowned Iranian American surgeon scientist and former political prisoner said, “I was imprisoned and tortured severely in 1981 in Evin prison and by auditory hearing witnessed fires of fire squads in Evin prison every day, counting up to hundreds in some nights, witnessed barbaric torture of individuals and inhuman treatment of thousands of young people who had been arrested in support of MEK.” He implored President Biden to hold Raisi accountable for his crimes.

Dr. Soolmaz Abooali, a professor and an accomplished U.S. martial arts champion pointed to Madam Rajavi’s 10-point plan for future of Iran and said, “Mrs. Rajavi has a plan specifically on the rights of women, her blueprint is one which spells out how gender equality will be achieved in a future Iran.” “It is no coincidence that you now have young women leading Resistance Units in Iran who act as engine for change, Ms. Abooali said.

The event was moderated by Mr. Amir Emadi, whose father was brutally murdered by IRGC Quds forces operatives in Camp Ashraf, Iraq on orders of the now eliminated Quds force commander Ghasem Soleimani.