A few days ago, Iran’s largest opposition group, The National Council of Resistance of Iran (NCRI) correctly said that Iranian regime’s Supreme Leader, Ali Khamenei’s attempt to consolidate and chosen Ebrahim Raisi as the regime’s new president in an attempt attempt to further consolidate power within the clerical regime.

To accomplish this feat, Khamenei used the Guardian Council during the presidential and the parliamentary elections that 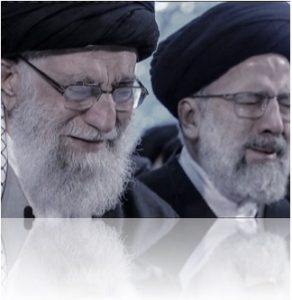 preceded it, to eliminate  rival factions and individuals that he perceived as posing a threats to his regime. Accordingly, a parliamentary cabinet was chosen, primarily consisting of thieves and internationally wanted or designated terrorists. The group is headed by a president who himself is known for a dark history full of human rights abuses, massacres, and crimes against humanity.

Those who prefer a conciliatory policy with the regime or who cooperate with it directly, consider Khamenei’s actions as sign of his strength. Yet, even regime’s own media and officials acknowledge that Khamenei’s contraction policy will be a failure at best.

Speaking with Aftab News (a state run media outlet), Hamidreza Jalaiepour, who is a member of a rival faction said recently, “The cabinet members were introduced to the parliament and received a vote of confidence from the parliament. What are the characteristics of this cabinet and what consequences will it have in society?” He then added that Raisi’s government wants to consolidate power in order to deal with and control the many crises the regime is currently dealing with, not for achieving greater efficiency in government.

Taken within the context of a spiraling COVID-19 outbreak, a prison video leak, and seemingly perpetual nationwide protests, Khamenei and his regime have on way of escaping a restive society they can not control. Forty two years of corruption, oppression, and now the Covid-19 outbreak which the mullahs’ refused to address properly, have led to a deepening of public hatred towards the regime.

Nationwide protests in 2018 and 2019 during which millions of people called for regime change have rattled the regime’s foundations. Jalaiepour said, for example, that the ministers in Raisi’s cabinet were chosen not because of, “qualities and background, performance and ability,” but for their loyalty to the “propaganda program” run by the regime. The government is well aware he said, “of the potential for popular unrests in society. Therefore, a cabinet has been introduced that is capable of controlling and dealing with popular protests and when protests happen, there wouldn’t be any voice of opposition in the government.”

According to Hamidreza Jalaiepour, Raisi’s government is not efficient enough to control the three crises of livelihood, health, and drought – but it is mostly a cabinet of ideologues chosen to reaffirm Khamenei’s propaganda machinery and agenda.

The people of Iran have long moved on from frustration and now fully resent the regime, in all its faces. The economic downfall, droughts brought on by unsustainable developments and incompetence, cronyism, corruption, topped with the rather intentional mismanagement of the COVID-19 crisis which has resulted in the preventable deaths of tens of thousands of Iranians, has only heightened people’s confrontation with the regime.

Khamenei used the pandemic as a weapon against the people of Iran with the aim of subduing the restless population who are striving for regime change. His goal has been to prevent demonstrations against the regime and buy time for his weakening regime. Yet, protests this summer that initially erupted in Khuzestan province and spread to other parts of country demonstrated that his attempts in subduing the society or meeting their most basic needs have failed.

The self evident truth is that despite enormous human suffering and increased oppression, the public hatred toward the mullahs’ continues to increase. In a macro and micro sense, the regime is at an impasse.  If it stops oppression, protests rapidly spread across Iran. If it kills openly, people’s anger will surely multiply. And if it concedes to the West on the nuclear issue, support for terrorism, or on its human rights abuses in any appreciable way, it will demoralize and weaken the most dominant force within the regime – the IRGC. It can ill afford to do any.

Thus, the regime is in a deadlock and has no way out. Yes, the regime in Tehran is facing such a dire conundrum and is weakening each day.  Nothing, not even foreign aid or ill advised engagement can save the regime because the the oft intangible is now the most tangible variable in regards to Iran: The Iranian people and their organized resistance.

Event to call on US to hold Ebrahim Raisi Accountable