The Organization of Iranian American Communities-US (OIAC) sponsored a policy briefing in the
US Senate, Kennedy Caucus Room. 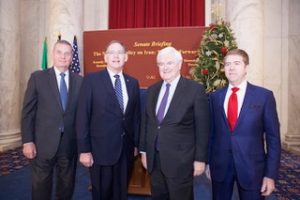 sponsored a policy briefing in the US Senate, Kennedy Caucus Room, to discuss the way forward for US policy on Iran.

Senator Ben Cardin (D-MD), the ranking member of the Senate Foreign Relations Committee, explained why confronting Iran is not a “partisan issue,” adding, “We need to support the people of Iran, and we do that by standing strong against the leadership of Iran and what they’re doing. We’ve got to lead. If the United States doesn’t lead, the world will not respond. I’ve talked to our friends from Europe. I think they’re prepared to act more aggressively with us. We have Democrats, 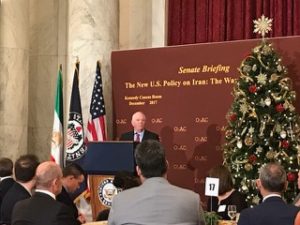 Republicans that are very much committed to all these issues.”

Senator John Boozman (R-AR), member of the Appropriation Committee, added, “This is the way that you get change, by coming and talking and explaining why this is so, so very important…And we will help any way that we can.”

In a video message, Mrs. Maryam Rajavi , the president-elect of the National Council of Resistance of Iran (NCRI), stressed that in order to tackle the Iranian regime’s nefarious activities in the region, the international community must take “practical steps to drive the IRGC and its proxies out of Syria and Iraq and other countries in the region…Those benefiting from trade with the Iranian 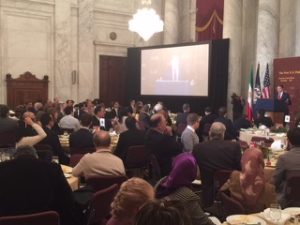 regime are not the people of Iran, but the IRGC…Therefore, comprehensive sanctions, including sanctions on its banking system, must be imposed on the regime.

It is essential to recognize the National Council of Resistance of Iran as the only democratic alternative to the religious terrorist dictatorship in Iran. This alternative believes in a free and democratic Iran, gender equality, separation of religion and state and a non-nuclear Iran.”

General James Jones, USMC (Ret.), the first National Security Advisor to President Obama, spoke on shaping the future of US Iran policy through six specific actions, namely “maintaining a constant, vigorous, and innately skeptical eye on the regime’s compliance…of the nuclear agreement, remain focused on a just outcome in Syria, create a defensive alliance to check Iranian regime’s power, try to reinvigorate the Middle East peace process, be consistently visible in our support to the Iranian people, examine very closely the 10-point plan set forth by Mrs. Rajavi about what tomorrow should look like.”

Newt Gingrich, former House Speaker, explained how “the Iranian dictatorship is a threat on every front. It’s a threat to the Iranian people…When Khomeini said, ‘Kill all of them,’ and they killed 30,000 people , it was a symbol of the ruthlessness and the toughness of this dictatorship. And it hasn’t moderated. The people doing the killing are now in the Cabinet…We need a long-term strategic effort.

We need to dramatically expand our communication with the Iranian people and maximize the understanding among the average Iranian that there is a better future, that there is an alternative, that they would have allies, and that in fact, the United States wants a free, independent Iran run on behalf of its people, not on behalf of the dictatorship…Only by working for a free, self-governing, open Iranian society can we ever get to peace and stability in the region, and that has to be the goal to which we are dedicated.”

Ambassador Lincoln Bloomfield, Jr. former Assistant Secretary of State for Political Military Affairs, noted that the
administration has called on Congress to provide guidance on Iran policy and it should begin by learning more about the NCRI. “For 38 years, since Ayatollah Khomeini took over power in Iran after the fall of the Shah, we’ve let Iran get away with a long list of acts of terrorism and aggression.

There are the shocking human rights abuses by this regime against the Iranian people. So there are detailed dossiers becoming available about senior figures in the Iran regime, listing their foreign and domestic crimes going back many years. A number of the top figures today were directly responsible for the massacre of 30,000 jailed political prisoners in Iran in the late summer and fall of 1988.

A crime that has recently been exposed in detail and must now be fully investigated by the UN, the U.S., and
others… Hold Iran accountable for its actions, as Mrs. Rajavi just said,” he added.

Dr. Firouz Daneshghari, professor of surgery at Case Western Reserve University, commended members of the Senate and praised the bipartisan senate legislation which holds Iran accountable for ballistic missile development, support for terrorism, transfers of conventional weapons to or from Iran, and human rights violations.