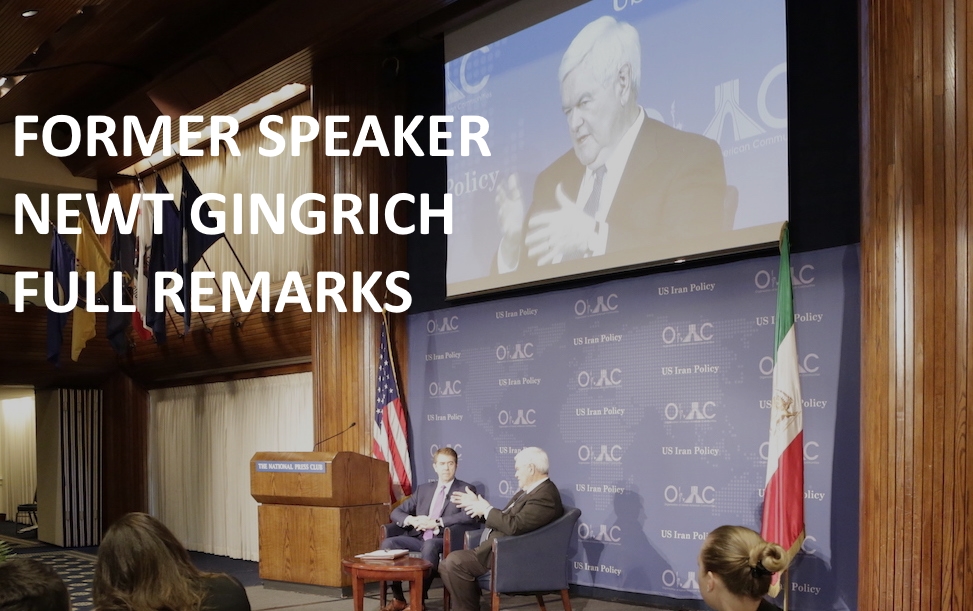 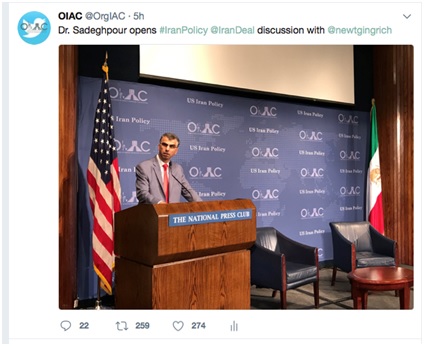 Dr. Majid Sadeghpour, the Political Director of the Organization of Iranian American Communities in the U.S. welcomed the attendees.

The event was moderated by Amb. Lincoln Bloomfield Jr., Assistant Secretary of State for Political-Military Affairs during the Bush Administration. 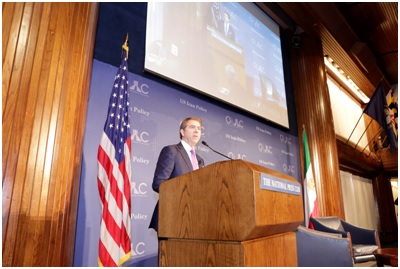 Gingrich lauded President’s Trump decision not to certify the Iran nuclear deal, known as the Joint Comprehensive Plan of Action (JCPOA). “I think the President in his   decision to not recertify… followed just about exactly the right path. He didn’t break out of the agreement. But he communicated that the agreement was vulnerable.” 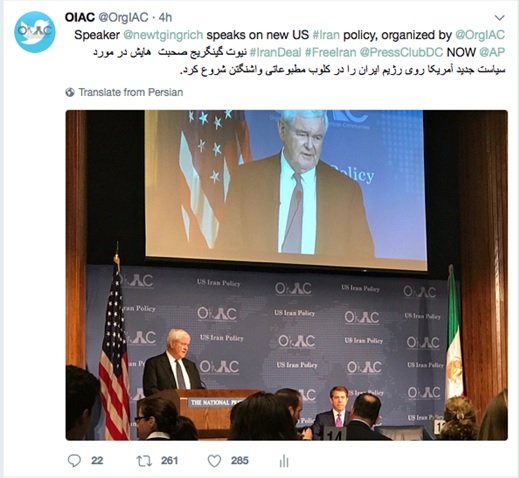 Noting that his position is that the nuclear agreement needs to be reframed to reflect the larger context of the Iranian regime, former House Speaker said, “This is in the end about a dictatorship which defined in its very constitution that it is a revolutionary regime with global aspirations. This is about a regime which just three or four weeks ago the parliament in passing a defense bill was chanting death to America.”

Gingrich described the regime “a dictatorship with the façade of democracy” and that “it is in the long run, in the interest of the United States, to find a way to replace the dictatorship.” 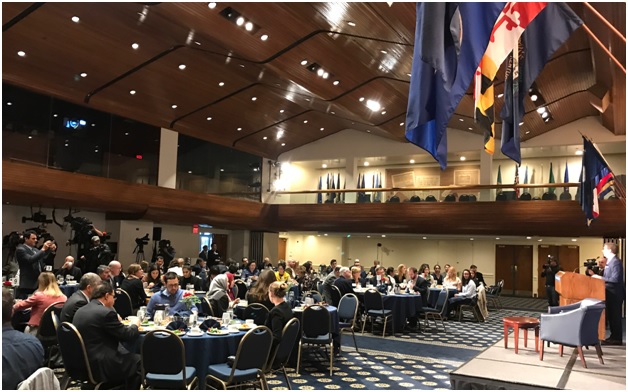 Gingrich also expressed his support for the National Council of Resistance of Iran (NCRI), stating, “they have been the best source of information on the nuclear program, constantly …. “[NCRI’s President-Elect Maryam] has done an amazing job of leading an organization through a very long, very difficult period and I would hope that at some point in the near future that she would be given an invitation to officially visit the United States and to have both the chance to meet with American leaders in Washington, but also to go around the country.  She is one of the examples of a symbol of resistance to the dictatorship that would have a huge impact across the whole country.” 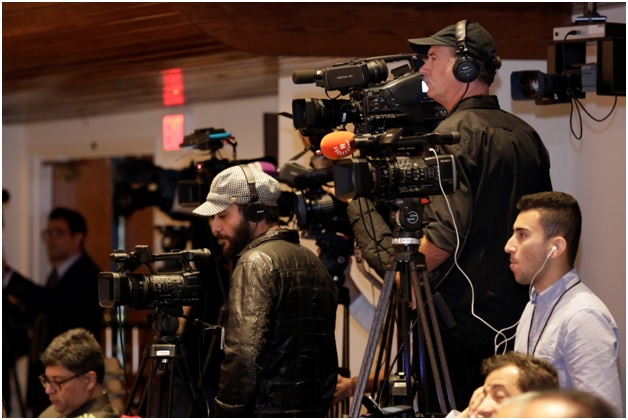 Gingrich concluded by expressing his “strategic optimism” for Iran. “I am strategically optimistic. I think it is an enormous amount of work ahead of us, but I think it is doable and the tide of history is with freedom… we will get stronger and they will get weaker,” he said. 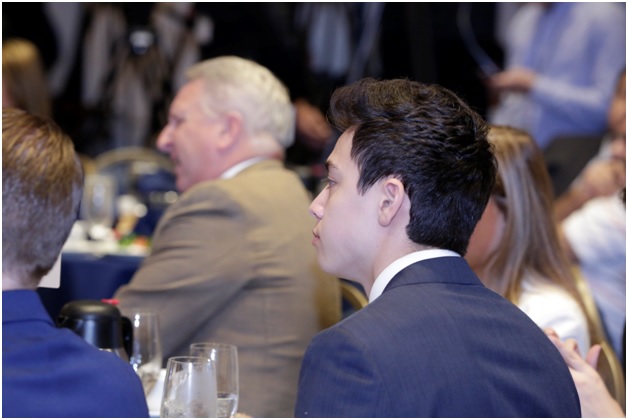 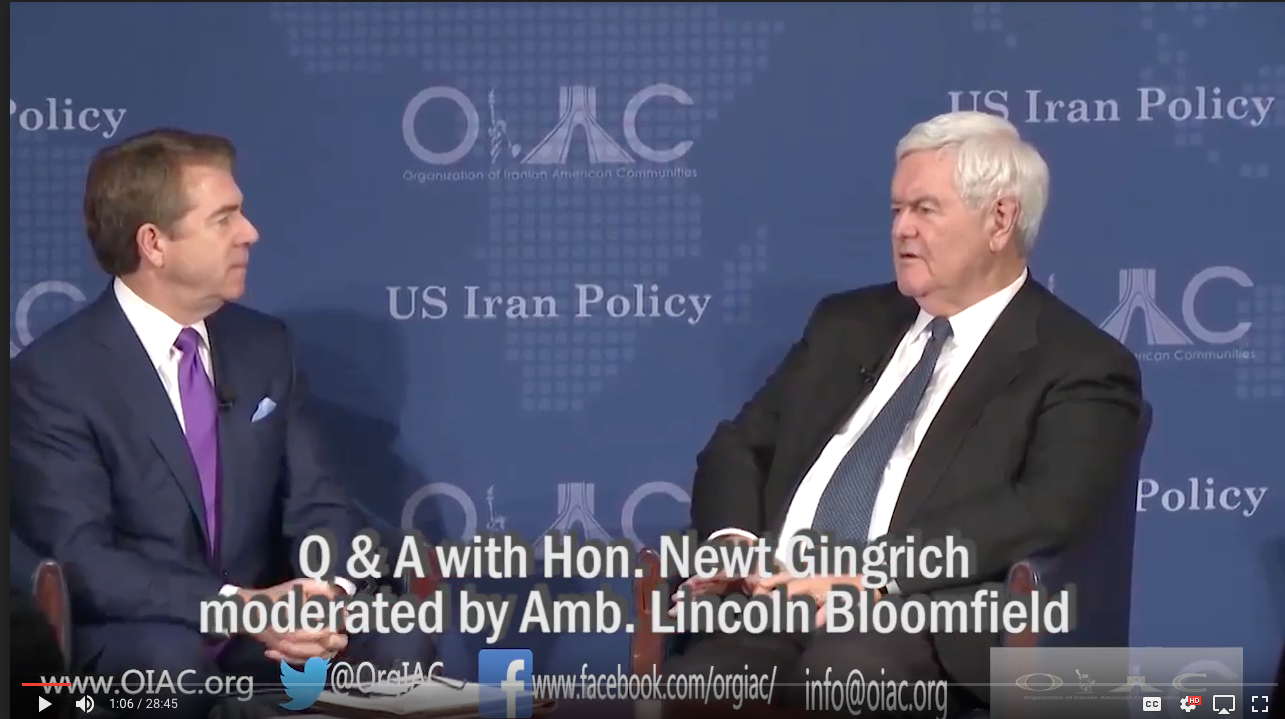 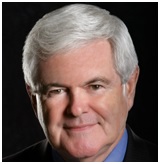 On Friday, October 20, 2017, Former House Speaker, The Honorable Newt Gingrich, will be the Keynote Speaker at a luncheon at the National Press Club. He will discuss the U.S. Iran Policy: The Way Forward as the President is conducting a top-to-bottom review of the policy on Iran. Ambassador Lincoln Bloomfield, former Assistant Secretary of State for Political Military Affairs, will moderate the event.

RSVP: Please EMAIL us at info@oiac.og. PLEASE include your profession and affiliation in your email. Due to limited space available, MEDIA reps. have the priority.