DETAILS ON DECISION MAKING PROCESS, COMMAND CHAIN, AND TIMELINE OF

Ali Khamenei, supreme leader of the regime, directly ordered the commanders of the operation to conduct the attack.

The People’s Mojahedin Organization of Iran (PMOI/MEK) – the pivotal member organization  of  the  National  Council  of  Resistance  of  Iran  (NCRI)  –  has  obtained exclusive and top secret information sourced from inside the Iranian regime detailing the missile and drone attack carried out by the Iranian regime against the oil facilities  of Saudi Arabia in Abqaiq and Khurais on September 14, 2019.

These Intelligence reports indicate that the operation resulting in the attack involved the highest levels of the IRGC who directed it at every step. Ali Khamenei, supreme leader of the regime, directly ordered the commanders of the operation to conduct the attack, and the tactical command headquarters for the operation deployed from Tehran to Khuzestan province (southwest Iran) one week prior to the attack. The missiles used in the  attack  were  Ya-Ali(1)   cruise  missiles,  nicknamed  Anti-Ali  missiles  by  the  Iranian people, and Thamen-ol A’emeh Industries situated in Parchin, Tehran, produced them.

“Intelligence reports indicate that the operation resulting in the attack involved the highest levels of the IRGC who directed it at every step.” 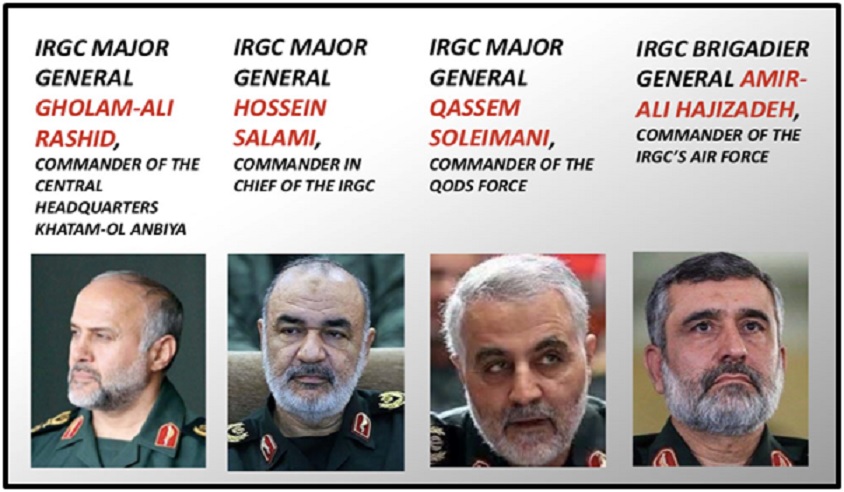 In addition to the above list, several other commanders of the Armed Forces and the Law Enforcement Force (Iranian regime’s police force) participated   in the SNSC session.

(2)  Mahmoud Bagheri Kazemabad has been designated by the Treasury Department of the United States Government, OFAC’s SDN list, May 22, 2018 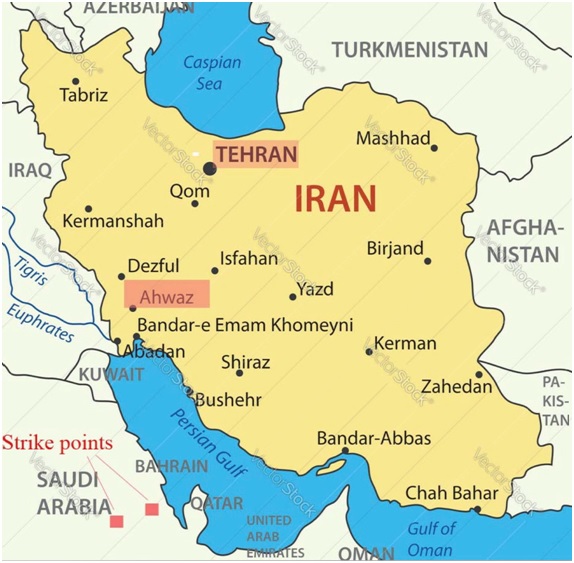 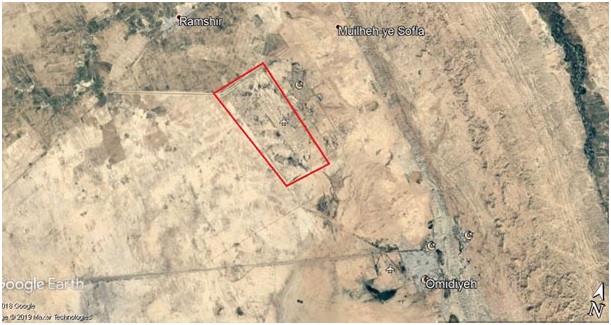 Satellite image of Omidiyeh base (85 km from Ahvaz, Khuzestan, Iran)

The IRGC has devoted part of its missile production capacity to manufacturing of cruise missiles.  These missiles are produced by cruise industries group named Thamen-ol A’emeh Industries situated in Parchin, Tehran. Factories operating under this group are:

Parchin
Parchin is a large sprawling military complex in southeast of Tehran under the control of the defense ministry. Twelve military and missile industries are located within Parchin, each of which the defense ministry has codenamed as “plan”, from plan 1 to plan 12.
According to specific information, the Ya-Ali cruise missiles used in the attack on the
Saudi Aramco oil facilities were produced in Plan 4 of Parchin. 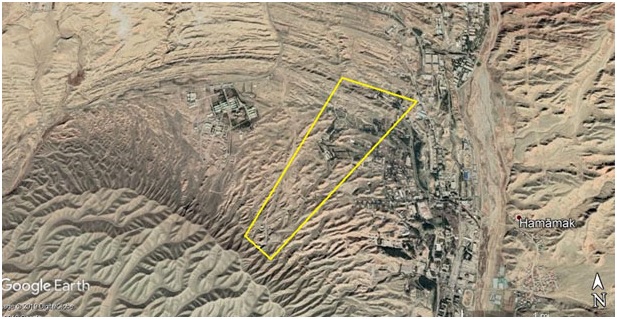 The Iranian regime has sent a group of its missile experts to North Korea in past years to learn how to produce cruise missiles.  In 2009, a group of twenty experts was dispatched to North Korea. The head of the group was Hossein Pourfarzaneh, an expert in the production of turbojet engines. Pourfarzaneh is currently heading the “Presidential Scientific Technology Industries” in the field of turbojet engines.

Iran’s  southern  coastal  provinces  (on  the  Persian  Gulf  coast)  comprise  the  most important sites of the IRGC’s production and stockpiling of missiles. These centers and sites are all under the control of the IRGC air force and missile command. The IRGC navy’s engineering corps have primarily constructed these centers and sites.

Fajr 5 Tunnel – Production and Stockpile of Missiles
Fajr 5 tunnel is one of the most important secret facilities of the IRGC navy for the production and stockpiling of missiles. It is situated in Beheshti base in the Beiza region to the north of Shiraz in Fars province.  The base is the logistical center of the IRGC navy. The base houses a tunnel complex and adjoining facilities for the production and stockpiling of the IRGC’s missiles.  IRGC engineering corps have also built missile launch pads in the protected area adjacent to the base (Appendix 2 and 3).

Be’asat 1 Base (a.k.a. Imam Mohammad Bagher base)

Location:  North of Shiraz, Kilometer 5 of Shiraz to Marvdasht road, east of the road, after Roknabad town (formerly Akbarabad)

Mission: Production and Stockpiling of IRGC Navy missiles among other activities

Description:  The facility consists of three bases situated alongside one another.  The total length of the facility is 7 kilometers. Ammunition depots constructed by IRGC engineering corps to hold missiles are situated at the northern end of the facility as well as missile launch pads.

Location: North of Shiraz, Kilometer 12 of Shiraz to Marvdasht road, in a canyon to the west of the road

Mission: Command HQ and Production and Stockpiling of IRGC Navy missiles Description: The facility has an extensive tunnel network and other facilities. (Appendix 5)

Location: North of Shiraz, Kilometer 10 of Shiraz to Marvdasht road, east of the road

Location: Northeast of Kazeroun, adjacent to Imam Sajjad Brigade Special Forces base of the IRGC Navy,

Description: Imam Sajjad Special Forces brigade of the IRGC Navy that is assigned to

Abu Mousa Island in the Persian Gulf has a base adjacent to the Army’s Seventh Base. (Appendix 7)

Description:  There  is  a  sprawling  tunnel  complex  and  underground  facilities  in  this location.  It is highly protected and secured.  Mobile phone signals are blocked in the area close to the tunnel. The regime has often mentioned this tunnel in its propaganda as its missile city.

Location:  Northeast  of  Borazjan  on  the  road  to  the  asphalt  factory  in  the  east  of Borazjan, after the IRGC base; after passing through the IRGC base the road extends about 5 kilometers to the tunnel entrance.

Mission: A main site in production and stockpiling of missiles for the IRGC Navy. Description: The tunnel is 300 meters in length.

Location: In Imam Hassan Port, opposite fuel storage tanks, missile launch pads on the other side of the road

Description: The fuel storage tanks provide cover for the site. They have built the tanks with concrete and underground.

Location:  Near the coastline of Qeshm Island and Port Mosen Base  – Underground facilities

Mission: Underground warehouse for stockpiling missiles of the IRGC Navy

Description: The underground facility has five layers of concrete and earth to neutralize any possible bombing. The IRGC has used this facility to export missiles to Yemen and Lebanon in the past.

In addition to the above tunnels and centers, the Iranian regime has other tunnel and underground  facilities  in  southern  Iran,  including  in  Asaloyeh,  Jam,  Bandar  Abbas, Gotvand County Khuzestan, Abu Musa Island, Greater Tunb and Lesser Tunb Islands, and Minab.

14,  2019  emanated  from  inside  Iran  and  was  a  blatant  act  of  war  that  Khamenei, Rouhani, Zarif, and other regime heads were responsible for in deciding, approving, and implementing.

The regime hopelessly tries to prevent a popular uprising and thwart the expansion of resistance units by using internal suppression and external sponsorship of terrorism. It seeks to contain the deep-seated anger of society at its disastrous and inhuman rule.

It is quite telling that according to numerous reports from inside the IRGC, all IRGC forces   were on full alert during and after the attack.  IRGC units implemented suppressive maneuvers to intimidate Iranians in various cities and to fend off the threat to their rule that they see in a popular uprising inside Iran as their main concern.

The regime is counting on inaction of the international community in its aggression. As long as this regime exists, it will not cease its aggression. The lasting solution for ending religious fascism as the source of all the crises in the Middle East is for the Iranian people to change this illegitimate regime with their popular uprising and with Iran’s organized resistance movement.

We call for the below concrete steps 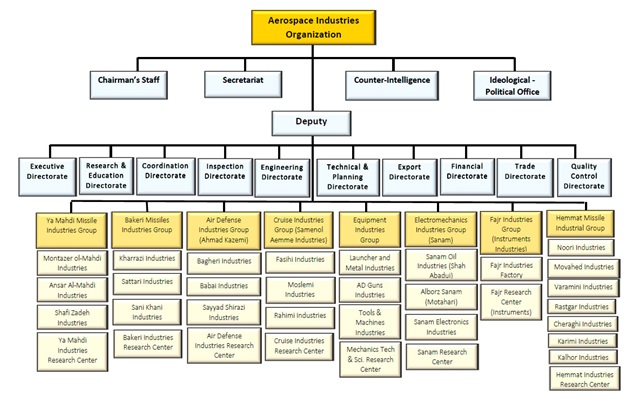 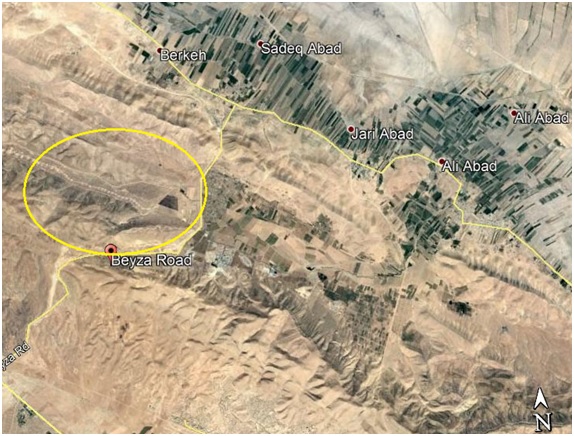 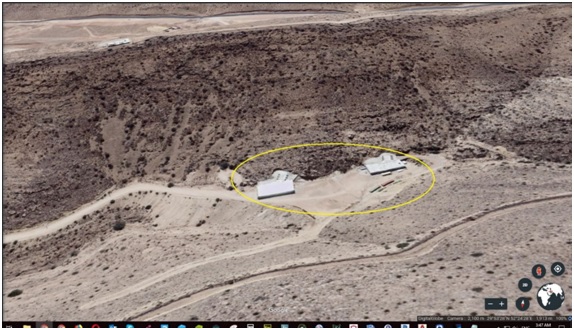 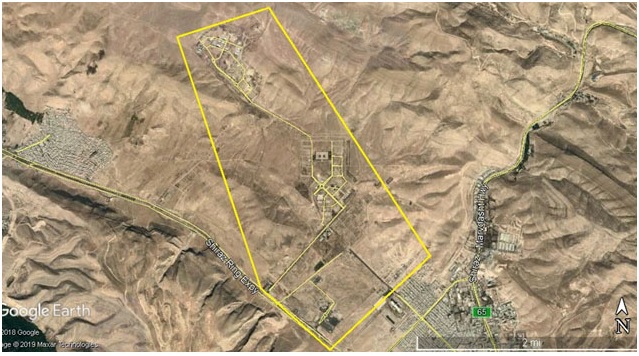 Satellite image of Be’asat 1 base in north Shiraz, Iran 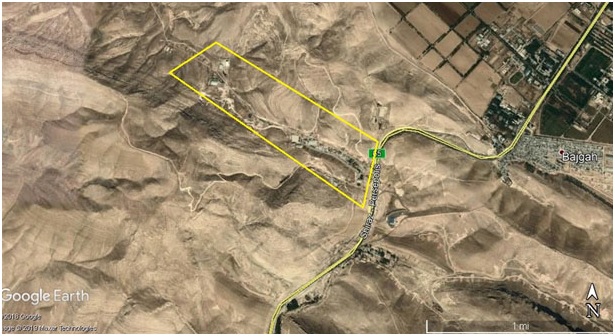 Satellite image of Be’asat 2 base in north Shiraz, Iran 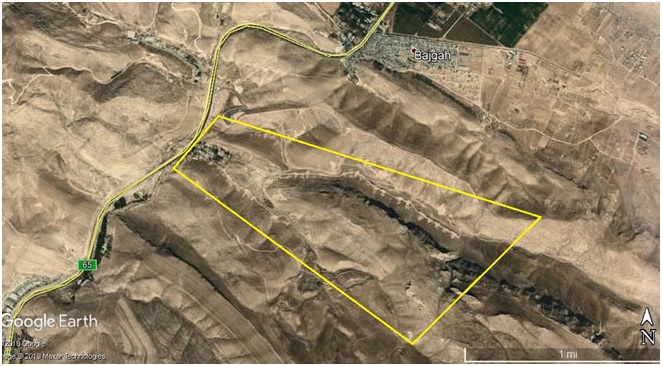 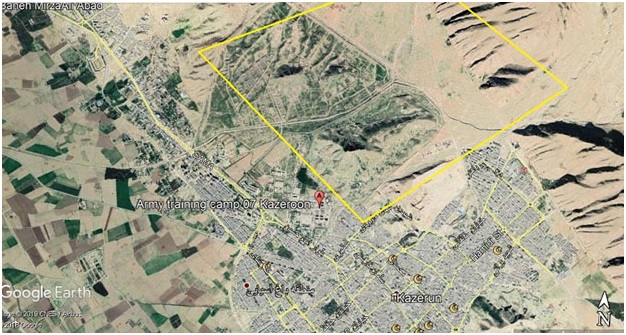 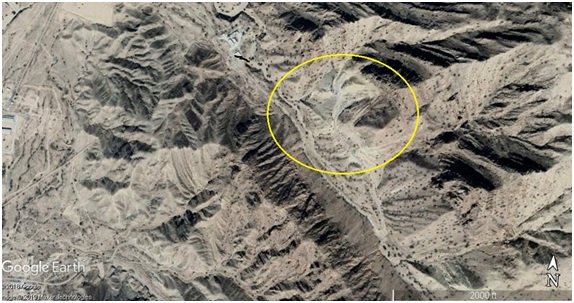 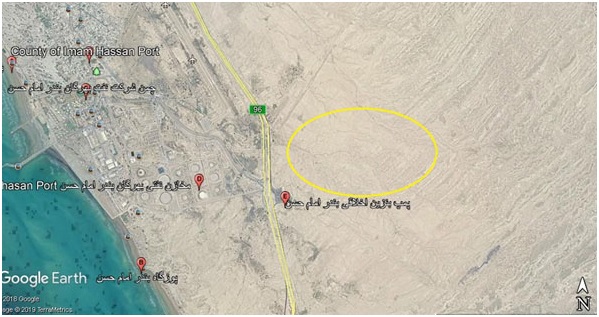 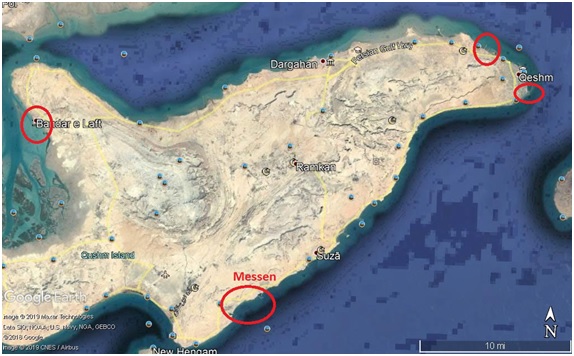 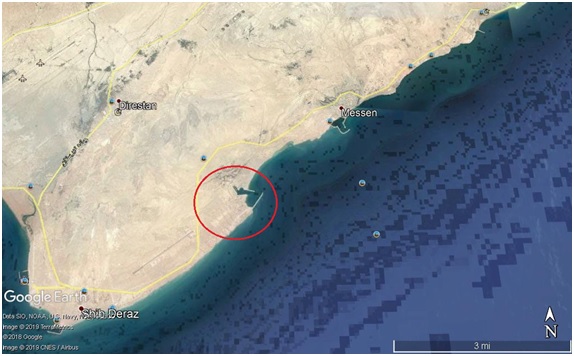 Satellite image of IRGC missile base in Qeshm Island 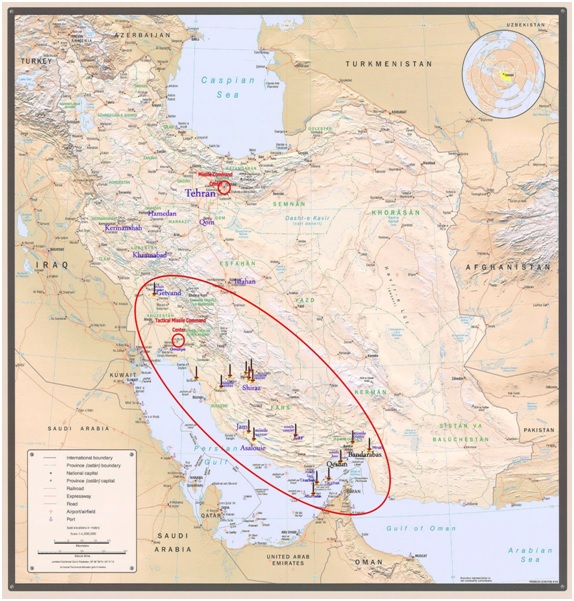 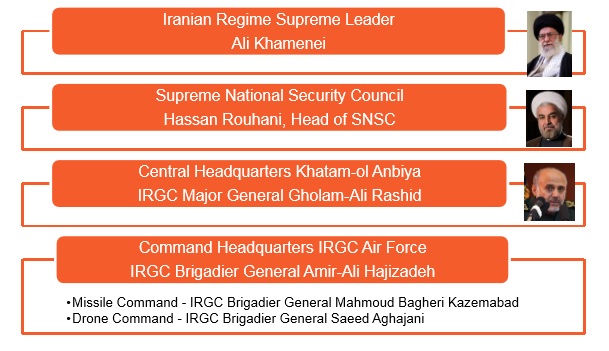 Central Headquarters Khatam-ol Anbiya is the highest level of operational command in the Iranian regime’s armed forces.  Ali  Khamenei  appointed  IRGC  Major  General Gholam-Ali  Rashid  to  command  this  headquarters  on  July  5,  2016.  Rashid reports directly to Khamenei as the commander in chief of all of the regime’s armed forces and services.

This  headquarters  commands,  plans  for  and  coordinates  various  formations  of  the regular army and the IRGC and the Law Enforcement Force and other armed forces of the  Iranian   regime   in  time  of  war  and  during   operations.   The highest   wartime commander of the Iranian regime therefore will be IRGC Major General Gholam-Ali Rashid. The armed forces central command will be subordinate to Central Headquarters Khatam-ol Anbiya.

Ali Khamenei issued a proclamation on June 28, 2016, in which he replaced IRGC Major General Firouzabadi after 27 years as the chief of staff of the armed forces and appointed IRGC Major General Mohammad Bagheri in his place. At the same time, he appointed IRGC Major General Gholam-Ali Rashid who was Firouzabadi’s deputy as the commander of Central Headquarters Khatam-ol Anbiya. The changes reflected Khamenei’s reorganization of the armed forces at the highest level for war circumstances. A number of the regime’s highest-ranking commanders were transferred to the central headquarters after its formation.

The  headquarters  was  first  formed  during  the  Iran-Iraq  war  and  coordinated  war operations between the regular army and the IRGC at the time. 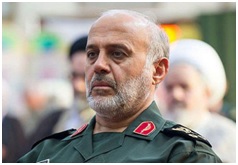 IRGC Major General Gholam-Ali Rashid was one of the highest-ranking commanders of the regime in the Iran-Iraq war. He held the position of operational deputy of the IRGC towards the end of the war and was involved in the planning of many of the IRGC’s operations leading to the death of many troops during the war.

He has held sensitive military posts after the war. He was deputy chief of staff of the armed forces before his appointment to his current post as commander of Central Headquarters Khatam-ol Anbiya.

Rashid was the highest commander involved in the missile and drone attack on the Saudi oil facilities.

He recently visited IRGC air force units in Isfahan on June 25, 2019, praised them for the attack on the American drone in the Persian Gulf, and said, “This operation was carried out with four characteristics of precision in targeting, detailed calculations, and timely decision-making and action.” Rashid has also recently visited IRGC air force units on July 29, 2019.

The  base  is  located  85  kilometers  southeast  of  Ahvaz  and  about  20  kilometers northwest of Omidiyeh in Khuzestan province.

The base is 20km by 15km in area. It consists of an airport, military facilities, and living quarters and park for personnel.  There are several air defense posts inside the base and dozens of airplane shelters.  The base has a long landing strip constructed for heavy military cargo planes.

During  the  Iran-Iraq  war,  the  base  was  the  air  force’s  fifth  interceptor  base  and considered one of the most important air bases of the regime.

The expansive base in Khuzestan has provided a good base for the operation of the tactical headquarters of the IRGC air force’s attack against Saudi oil facilities. 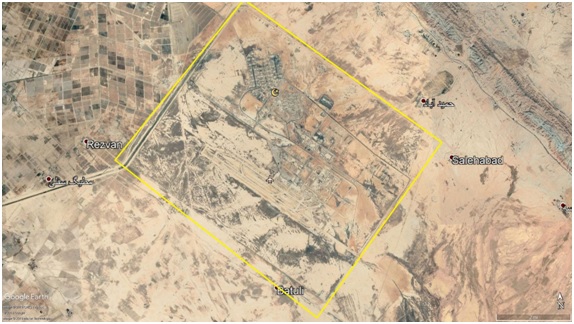 These materials are being distributed by the National Council of Resistance of Iran-U.S. Representative Office. Additional information is on file with the Department of Justice, Washington, D.C.

Iran Executes 11 People Including a Woman in Two Days