On September 24, 2019, thousands from across the United States attended a major rally across from the United Nations to support the Iranian people’s movement for regime change. The rally called on the international community for firmness toward the oppressive and terror-sponsoring theocracy ruling Iran, as the 74th annual session of the UNGA began its work.

Former New York Mayor Rudy Giuliani addressed the gathering and passionately defended the Iranian people’s resistance for democratic regime change in Iran. “I am for regime change,” he said adding, “Down with the tyrants in Iran. Down with the ayatollah and the mullahs and all the crooks.” Mr. Giuliani told the crowd that the National Council of Resistance of Iran (NCRI) “can take over and run Iran like no other regime change models.” Iran would thus be able to go, “From Regime of terror to regime of democracy & freedom under leadership of Madam Rajavi.

Also addressing the rally was former Senator Joe Lieberman who called on the international community to embrace a policy of regime change by helping to empower the people of Iran and their organized resistance. “Regime’s aggression still continues,” Senator Lieberman said and warned, “Our policies won’t change their behavior. It’s Regime Change that can stop the bloodshed.” 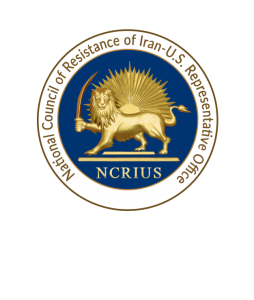 Iran’s main resistance group claimed Monday to have intelligence detailing how Tehran was behind the recent attacks on a Saudi oil facility — just days after Iranian President Hassan Rouhani challenged the international community to provide such evidence of its involvement.

The National Council of Resistance of Iran (NCRI) said it has received information from within the government that detailed the missile and drone attacks on Saudi oil facilities on Sept. 14.

It announced its claims in a report, along with an accompanying press conference in Washington, D.C. The report says that the attack was ordered on July 31 by Supreme Leader Ali Khamenei, with both Rouhani and Foreign Minister Mohammad Javad Zarif present.

The group says the information is based on MEK (Mujahedin-e Khalq) sources from within the regime and the Islamic Revolutionary Guard Corps (IRGC). MEK is part of the NCRI. “The regime is counting on inaction of the international community in its aggression,” the report says. “As long as this regime exists, it will not cease its aggression.”

The U.K., France and Germany joined the U.S. last week in blaming Iran for the attacks, a win for President Trump as he seeks to rally other nations to endorse its “maximum pressure” campaign and demonstrate that Iran is a rogue regime. “All nations have a duty to act, no responsible government should subsidize Iran’s bloodlust,” he said in his speech to the U.N. General Assembly last week. 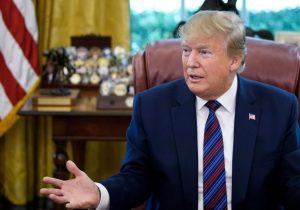 The Trump administration on Thursday banned all members of the Iranian regime and their family members from entering the United States, a move aimed at stopping regime figures from sending their children to America for schooling and other opportunities.

“The President announced a presidential proclamation restricting entry into the United States for senior Iranian government officials and members of their families,” Secretary of State Mike Pompeo said in a notice to reporters.

“For years, Iranian officials and their family members have quietly taken advantage of America’s freedom and prosperity, including excellent educational, employment, entertainment, and cultural opportunities in the United States,” Pompeo said. “Under this proclamation, designated senior regime officials and their families will no longer be allowed entry into the United States.”

“No longer will elites reap the benefits of a free society while the Iranian people suffer under the regime’s corruption and mismanagement,” according to the State Department.
Iranian regime figures have long taken advantage of America’s educational institutions, with many sending their children to the United States for college.

This will immediately end, according to the Trump administration.

“The Government of Iran is the world’s leading state sponsor of terrorism,” the State Department said. “The regime has destabilized the Persian Gulf region with attacks on oil and shipping infrastructure. Their support for the Houthis in Yemen and Shia militias in Iraq and Syria contribute to the regional instability and the humanitarian crises in those countries. The Iranian regime continues to suppress members of ethnic and religious minorities in Iran, as well as unjustly detaining foreign citizens to perpetuate their foreign policy aims.” 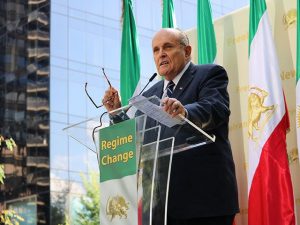 Thousands of Iranian-Americans Rally Against Rouhani in New York
NEW YORK — Thousands of people took to the streets of New York City Tuesday and Wednesday to call for regime change in Iran as Hassan Rouhani traveled to the Big Apple to address the 74th session of the United Nations General Assembly.
Breitbart News, September 27, 2019

“If one can topple this regime without an organization and leadership, without overcoming thorny trials, and without paying the price and making sacrifices, we say: Please, go ahead, don’t delay,” she continued.

“The mullahs’ regime is weak and at an impasse. Its adventurism and evil acts in the region are expanded only because no other party has stood up to it,” Rajavi added. “At the same time, the people of Iran are the regime’s primary victims.” 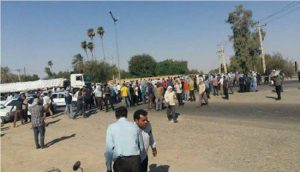 On Saturday, September 28, workers at the Haft Tappeh Sugar Cane Mill entered their sixth day on strike in protest to the expulsion of their colleagues.

After the announcement of the firing of at least twenty workers on Monday, September 23, all workers of the internal sections of the company including those in the mechanical section of the production line and those in the infrastructures’ section stopped working in solidarity with their fired colleagues and gathered in front of the company manager’s office. Security agents’ threats had no effects on the workers who asked for all those fired to regain their jobs.

With around 6000 personnel, the Haft Tappeh agricultural industry is situated 15 km away from Shush in Khuzestan Province, in southwestern Iran. The facility was built on 24,000 hectares of terrain and is considered one of the biggest in its class in Iran. “Do not forget that no power in Haft Tappeh can match that of workers and united workers,” announced one the workers on strike in their gathering.

The Haft Tappeh company began work in 1959. In the winter of 2015, in the course of turning big state-owned companies to the Revolutionary Guards (IRGC) and security apparatus, the company was put under the control of cover companies belonging to the IRGC and the security organs. That sparked workers’ protests.

Strikes and protests flared up since two years ago. Six days since the new round of strikes have passed in spite of pressure and oppression on behalf of security forces as well as empty promises made to the workers.

The workers’ main theme of protest is why such facilities belonging to the state have been turned over to relatives of Eshaq Jahangiri, Hassan Rouhani’s First Vice President. Owners do not miss a chance to hinder payment of workers’ wages.

Workers on strike have called for the removal of the company’s managers and the handing of the company to the workers’ council, something which has never materialized and has been, on the contrary, a pretext for oppression and expulsion of workers. 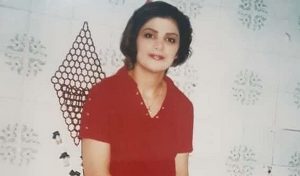 According to IHR sources, on the morning of Thursday, September 26, a woman was hanged at Sanandaj prison. Her identity is revealed by sources as Leila Zarafshan, 37.

According to sources close to Leila, she had previously been hospitalized for her mental illness. “Despite this, the authorities never provided examination by medical experts and forensics” said the sources.
According to the Iranian Islamic Penal Code (IPC) murder is punishable by qisas which means “retribution in kind” or retaliation. In this way, the State effectively puts the responsibility of the death sentence for murder on the shoulders of the victim’s family. In qisas cases, the plaintiff has the possibility to forgive or demand diya (blood money). In many cases, the victim’s family are encouraged to put the rope is around the prisoner’s neck and even carry out the actual execution by pulling off the chair the prisoner is standing on.

According to Maf News which was the first website published the news, Leila was held in prison for five years before the execution.