Iranian Doctors accuse Tehran of covering up and mismanaging Corona

Iranian doctors accused the regime in Tehran of deliberately using the Corona virus as a “weapon” against the people who paid the price for “cover-up, mismanagement and inefficiency.”

Doctors said during a symposium organized by the American Iranian Communities Organization on the Internet, that “the regime has stolen more than a billion dollars in humanitarian funds that were freed from the country’s foreign currency reserves to help fight the Corona virus.”

Participants added that, “aid was refused from the United States in March, and” Doctors Without Borders “was expelled on March 24 and the treatment center it had established in rural areas in Isfahan was dissolved to help the public, and flights to Wuhan continued for a long time after the outbreak of the pandemic, noting Until the Supreme Leader Ali Khamenei himself, he described the epidemic as “not a big problem” or a “blessing.”

The doctor and public health researcher, Azadeh Sami, criticized Khamenei’s decision to ban the import of American and British vaccines against the Corona virus, accusing the United States and the West in general of wanting to “pollute other countries.”

Sami said, “What evidence of this nonsense? Especially since hundreds of thousands of Americans and Britons are vaccinated daily with these vaccines.”

In January, Khamenei announced the ban on importing vaccines manufactured in the United States or the United Kingdom, considering that “there is no confidence” in them, and praising the reliance on a local vaccine through a company affiliated with the Committee to “implement Imam Khomeini’s order,” adding that vaccines can be relied upon. From other trusted places. ”

“Not ready”
“This clearly indicates that there is currently no viable domestic vaccine,” Sami said. “Besides, Iran under the rule of the mullahs is not even equipped to produce its own flu vaccine, and imports two million doses of influenza vaccine annually. As usual, Khamenei did not provide specific details about it.” When and from where the vaccines will be imported. ”

Doctor Saeed Sajadi, who has been working since the beginning of the epidemic to support a group of professional 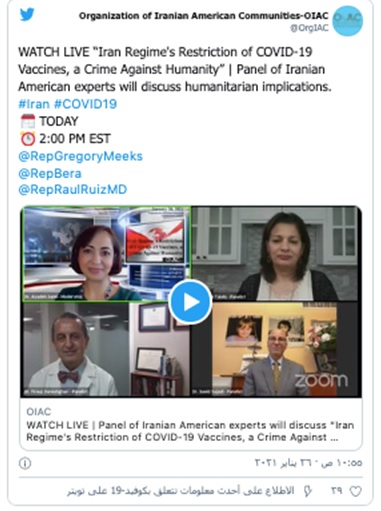 doctors in Iran, said, “Based on the regime’s own data, deaths due to Corona are the highest in the Middle East. However, the total actual deaths is five times higher than the official regime report numbers. That is why Iran needs highly reliable vaccines to overcome this epidemic. ”

Iran has officially announced that more than 1.4 million people have been infected with the virus, of whom nearly 57.9,000 have died, since the first cases of Covid-19 were recorded in February 2020.

“While other countries supported their people in difficult economic times, to limit the spread of the virus by reducing economic activity, the mullahs in Iran provided a $ 61 loan to some families,” Sajadi said, describing the amount provided as a “catastrophic loan, especially in light of the presence of subordinate financial entities.” For the supreme leader, it was built from the national wealth that could have supported the people in this difficult time, such as the Khomeini Stadium, which has national wealth sufficient to pay 100 dollars a month to every Iranian for one year.

OIAC Webinar on COVID in Iran

The Setad Organization, or “HTS” organization, follows the Iranian supreme leader directly, and has become an economic giant, after it collected its money from the confiscation of land from opponents over the past thirty years.

This body includes a portfolio of properties such as banks, farms, cement companies, a factory that produces contraceptives with a license, apartments confiscated from Iranians living abroad, and much more, according to Reuters.

Sajadi added, “Only one percent of the wealth of this institution is sufficient to pay the cost of purchasing the vaccine for the entire country. Meanwhile, the regime increases the budget of the Iranian Revolutionary Guard and is spending billions of dollars to continue proxy wars in the Middle East.”

The US embassy in Baghdad published a report last year, saying that Khamenei’s wealth is estimated at $ 200 billion, most of which falls under three institutions: the Imam Khomeini’s Orders Execution Authority, the Mostazafan Foundation, and the Astan Quds Razavi Foundation.

The Khomeini Foundation’s income from donations amounts to 27 billion Iranian riyals annually, according to data published in 2016.

It is noteworthy that more than a million and 140 thousand Iranians have been infected with Corona virus, since the beginning of its spread in the country, while about 53 thousand have died.

“A political game of distraction”
Founder of the Urology Institute at Cleveland University Hospitals, Feroz Daneshgari, said the Iranian regime is “promoting what they call the” Kofi Iran-Barakat “vaccine, which is under the direct supervision of an institution affiliated with Khamenei. This is another example of their political game and message aimed at distracting the public from the real issue. Represented in meeting the urgent needs of the public demand and addressing the epidemic. ”

“Iran does not have the knowledge or the correct preparation to develop a local vaccine. But until they can achieve this, there will be a waste of time which means that more people will die in the meantime. In sum, there is no rational decision to move away from an internationally approved vaccine and delay saving lives.” Khamenei’s decision is inhuman, illegal and criminal. ”

For her part, a research scientist in molecular biology, genetic and genetic factors, Zahra Talbi, said, “How is it that when ayatollahs need medical treatment in Europe, it is okay to travel to the UK, but when it comes to vaccination for the public, it is not trustworthy, you cannot Hide this utter contradiction from people’s eyes. ”

‘A crime against humanity’
In response to a question about whether the US sanctions are the reason for the regime’s inability to respond adequately to the epidemic, Daneshgari said, “Certainly not, with or without sanctions, this regime will continue to lie, cover up, deceive and steal the basic human rights of the Iranian people, including the right to the health”.

Iranian officials have complained of obstacles to purchasing vaccines due to the difficulty of transferring money due to economic sanctions imposed by Washington on Tehran. Although the sanctions theoretically exclude food and medical supplies, many foreign banks refrain from doing business with the Iranian for fear of being subjected to sanctions.

Talabani stressed that “depriving a country of vaccines that have proven useful, which can save the lives of one hundred thousand Iranians, is a crime against humanity, and is something that must be confronted by international organizations.”

The organization called on the international community to hold the regime in Tehran accountable for global health and humanity. Humanitarian aid and support for the Iranian people must pass through the World Health Organization or other international bodies with supervision and monitoring.