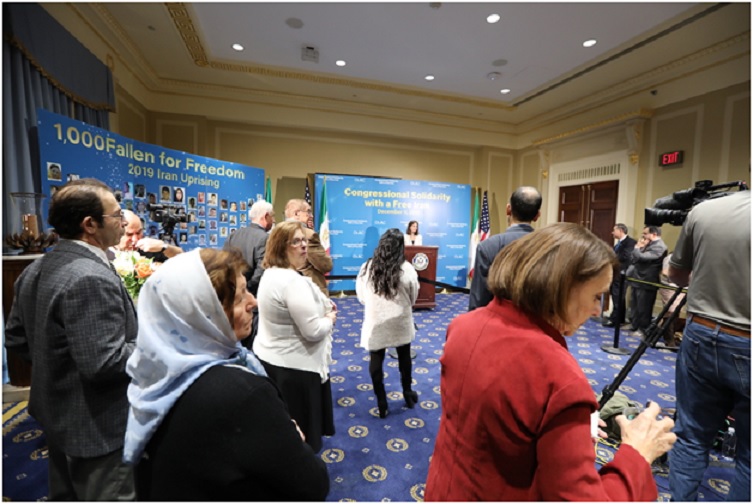 Bipartisan members of congress joined Iranian Americans from across the U.S. at a House Briefing titled,” Iran Uprising: The Nation Rises for Freedom,” and expressed support for ongoing protests in Iran urged the international community to hold Iranian regime accountable for indiscriminate and deadly use of force.

Ms. Homeira Hesami, a prominent leader of Iranian American Communities opened the event by welcoming the staffers, representatives of media and the Iranian American activists. In her opening remarks, she said, “The people of Iran want international recognition of their resistance to this regime. Congress can be loud and clear on Iran’s human rights record. There are ongoing executions, every day there is a message of resistance from Iranian political prisoners – we should speak in their defense. We must speak in defense of women’s movement, labor, environmentalists, children and youth. There are daily examples in the ongoing protests that needs to be talked about and raised – as a point of global objection to the regime and its policies/actions. That is why it’s so important for your office to support the Iranian people protests for a Free Iran.”

In his remarks Representative Brad Sherman (D-CA) of the House Foreign Affairs Committee applauded Iranian people for rising against religious tyranny and noted specially, his longstanding support for Iranian resistance leaders now living in Albania. “I was the lead democrat in introducing H.Res.374 which supports the people of Iran’s rights to free expression and condemns the Iranian regime for its crackdown on legitimate protests,” Congressman Sherman called on the President to enforce the laws congress has already passed that prevent the export of censorship technology to Iran,” including the “Comprehensive Iran Sanctions and Accountability Act provides those very limitations.”

Congressman Scott Perry (R-PA), also a member of the House Foreign Affairs Committee, demanded that the totalitarian regime of Iran let the people of Iran be free and let them determine their own destiny. He thanked organizers for, “bringing this display and this event to Capitol so that we can see it with our own eyes, and that we have an opportunity to weigh-in and so that you know where we stand on behalf of the people that we can not reach and touch, but we want to be very very supportive of their efforts.”

While expressing solidarity with anti-regime protesters in Iran and their demands for freedom, Congressman Tom McClintock (R-CA), the co-Chair of Congressional Iran Human Rights and Democracy Caucus (IHRDC) lamented how 40 years after taking control of Iran, the clerical regime is murdering its own people and is also, “still world’s number one state sponsor of international terrorism.”

Congressman John Garamendi (D-CA) who is a senior member of the House Committee on Armed Services praised the Organization of Iranian American Community for working to bring to congressional attention, “the desire of the Iranian people to have an open and free society and a government that respects human rights, and respects individual rights.” All of us need to work together and in particular be aware of the, “efforts of organizations like yours and those are in Iran,” Rep. Garamendi said.

Representative Paul Gosar (R-AZ) noted the bravery of the protesters who rose up in “130 cities.” Iranian regime turning off the internet and killing off their own people, he said, “is the very trademark of barbarism.” Rep. Gosar said we have to look to what is around the corner, in understanding, “the 10 point plan of Mrs. Maryam Rajavi, that is our first step here in the United States.”  American people need to see the tyranny that is going on Iran he said. “We are not this big satan, we are the eyes of freedom and we are watching and looking, making sure the free people of Iran get to have their voice and get rid of this tyranny.”

Congressman Raul Ruiz (D-CA) said that we, “must support Iranian people and the protesters who seek nothing but the fundamental rights and freedom. “I support a free Iran, I support Mrs. Maryam Rajavi’s 10 point plan,” Dr. Ruiz added. The Iranian people have spoken, Rep. Ruiz said in his remarks, adding, “the United States has heard you, we will be vigilant and stand with you.”

Congressman Steve Cohen (D-TN) who along with Rep. McClintock Co-Chairs the IHRDC, called the repression of the Iranian people “awful.” People will always rise up for freedom he said. The “1000 that have fallen in this uprising…it breaks your heart to hear that people are dying and their government is doing these things.”

Representative David Schweikert (R-AZ) lauded Iranian people’s “educational and intellectual vitality” and said that, “we have to tell their story.” America, EU and our Western allies… instead of worrying about today’s little financial relationships, to think about what the relationship could be, if it were truly free.”

In his remarks, congressman John Moolenaar (R-MI) pointed to U.S. government officials who have expressed support for the Iranian people and said, “we stand with the people of Iran and my heart goes out to those who have lost loved ones.”

Congresswoman Sheila Jackson Lee (D-TX) who was at the committee hearing mark up joined us via FaceTime, and said, “I have the belief that Iran will be free some day. I will be there with you standing in the sunlight of the beauty of Iran and people, and we will cry together because freedom has come. Never give up.”

Dr. Ashraf Zadshir of the Iranian American Community in California thanked bipartisan members of Congress for supporting Iran protesters and read a statement released by the office House Speaker Nancy Pelosi on the occasion of U.N. Human Rights Day.

Iranian regime has killed at least 1000 protesters and detained more than 12,000.  United Nations High Commissioner for Human Rights said last week, it “has evidence that Iran was ‘shooting to kill’ protesters.” UN said that it has also seen video footage in which security forces shot “unarmed demonstrators from behind while they were running away, and shooting others directly in the face and vital organs — “in other words, shooting to kill.” 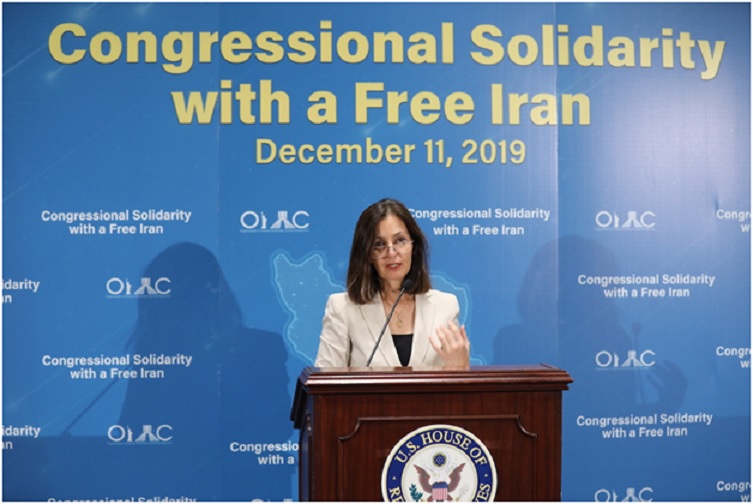 Briefing also noted the newly introduced H.Res.752, Supporting the rights of the people of Iran to free expression, condemning the Iranian regime for its crackdown on legitimate protests, and for other purposes” and thanked Rep. Ted Deutch (D-FL), Rep. Joe Wilson (R-SC), Chairman Elliot Engel (D-NY), and Republican Leader Michael McCaul (R-TX) for their leadership on this measure.

The regime in Iran is unable to abide by international norms, stop its human rights violations or its nuclear and missile projects, and its warmongering in the region – because that would lead to its internal collapse. It is finding it increasingly difficult to withstand an explosive society, increased international sanctions, and an organized Resistance. This is a deadly impasse that the regime will be unable to escape.

In such a paradigm, it is imperative that the International Community holds the regime to account for its killing go Iran Protesters, and unacceptable behavior at home and abroad. Respected members of the UN Human Rights Council and permanent members of the UN Security Council, can and must play a leading role in adopting a firm international policy against the regime in Iran. This firm policy should be based on following recommendations:

The ruthless slaughter of protestors at the hands of the Iranian regime must be treated with the utmost seriousness. It is urgent, therefore, that the United Nations Security council respond as quickly as possible to put an end to the politically motivated killings and free all political prisoners.