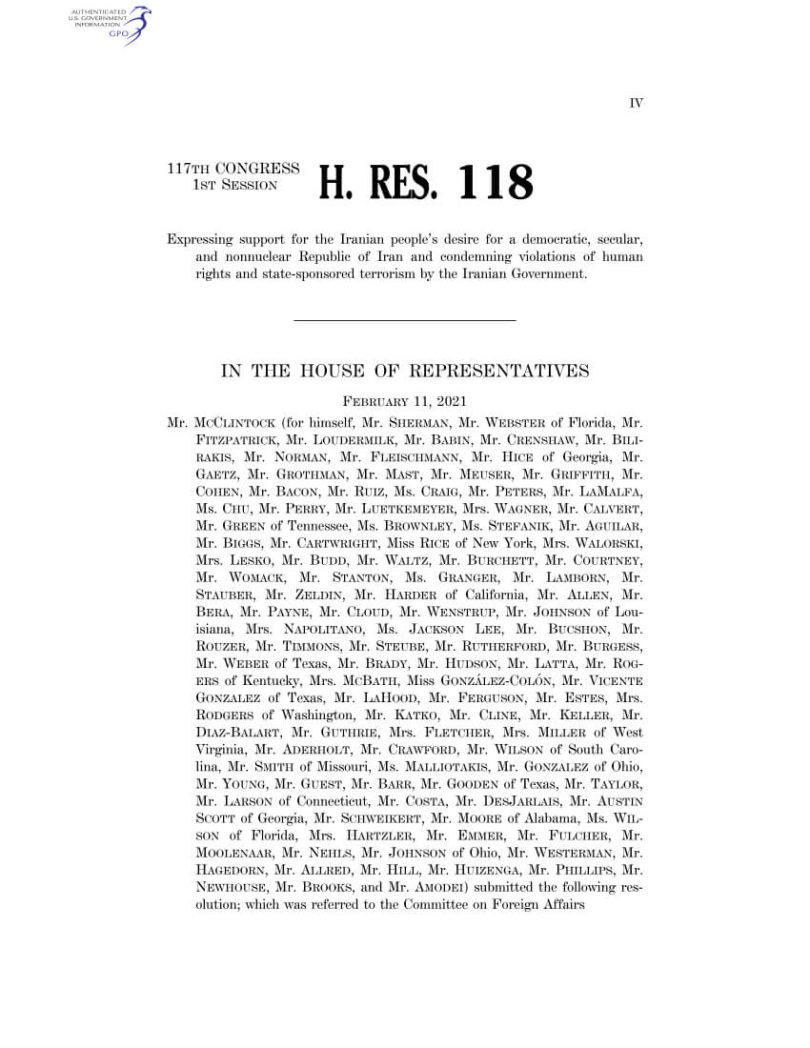 Expressing support for the Iranian people’s desire for a democratic, secular, and nonnuclear Republic of Iran and condemning violations of human rights and state-sponsored terrorism by the Iranian Government.

IN THE HOUSE OF REPRESENTATIVES
February 11, 2021

Expressing support for the Iranian people’s desire for a democratic, secular, and nonnuclear Republic of Iran and condemning violations of human rights and state-sponsored terrorism by the Iranian Government.
Whereas beginning in 2017, and continuing for several months after protests erupted in more than 100 cities, the Iranian regime suppressed such protests with repressive forces that resulted in at least 25 deaths and 4,000 arrests, including decorated wrestling champion Navid Afkari, who was later executed in September 2020 amidst international outrage;

Whereas, on November 15, 2019, popular protests against the Iranian regime began and rapidly spread to at least 100 cities throughout the country, and reports indicate that Iranian security forces used lethal force and about 1,500 people were killed during less than two weeks of unrest, and thousands more were detained during these protests;

Whereas, in the 116th Congress, the House of Representatives passed House Resolution 752, “Supporting the rights of the people of Iran to free expression, condemning the Iranian regime for its crackdown on legitimate protests, and for other purposes.”;

Whereas House Resolution 752 urges the Administration to work to convene emergency sessions of the United Nations Security Council and to work with United States partners and allies to condemn the ongoing human rights violations perpetrated by the Iranian regime and establish a mechanism by which the United Nations Security Council can monitor such violations;

Whereas, from January 11 to 13, 2020, protesters gathered across Iran chanting against Iran’s Supreme Leader Ali Khamenei and the Islamic Revolutionary Guard Corps after it shot down a Ukrainian passenger plane killing 176 civilians, and Iranian authorities deployed tear gas and live ammunition against the protesters;

Whereas the Iranian regime has routinely violated the human rights of Iranian citizens, including by implementing ongoing, systematic, and serious restrictions of freedom of peaceful assembly and association and freedom of opinion and expression, including the continuing closures of media outlets, arrests of journalists, and the censorship of expression in online forums such as blogs and websites;

Whereas the Iranian regime has killed or arrested more than 860 journalists since 1979;

Whereas the Iranian regime has lured three political activists to Iran’s neighboring countries, where they were abducted and transferred to Iran, of which one, Ruhollah Zam, was executed on December 12, 2020;

Whereas the Iranian regime has arbitrarily and brutally suppressed ethnic minorities, including Iranian Kurds, Baluchis, and Arabs, as well as religious minorities such as Christians, Jews, Baha’is, Zoroastrians, and even Sunni Muslims and deprived them of their basic human rights, and has in many cases executed them;

Whereas, in the 115th Congress, the House of Representatives passed H.R. 4744 calling on the United States to “condemn Iranian human rights abuses against dissidents, including the massacre in 1988 and the suppression of political demonstrations in 1999, 2009, and 2017, and pressure the Government of Iran to provide family members detailed information that they were denied about the final resting places of any missing victims of such abuses”;

Whereas the killings were carried out on the orders of a judge, an official from the Ministry of Intelligence, and a state prosecutor, known to the prisoners as “Death Commissions”, which were formed on July 19, 1988, and undertook proceedings in a manner designed to eliminate the regime’s opponents;

Whereas Amnesty International described as a “momentous breakthrough” marking a “turning point” the September 3, 2020, communication by seven United Nations human rights experts, regarding information that “between July and September 1988, the Iranian authorities forcibly disappeared and extrajudicially executed thousands of imprisoned political dissidents affiliated with political opposition groups in 32 cities in secret and discarded their bodies, mostly in unmarked mass graves”, as United Nations experts warned that “the situation may amount to crimes against humanity”;

Whereas the United States should be involved in any establishment of an international investigation into the 1988 extrajudicial killings of Iranian dissidents;

Whereas senior Iranian Government, military, judicial, and security officials have for decades ordered or committed egregious human rights violations and acts of terror;

Whereas the Iranian people have been deprived of their fundamental freedoms for which reason they rejected monarchic dictatorship and are opposing religious tyranny;

Whereas, on June 30, 2018, tens of thousands of people gathered in Paris at the Free Iran gathering where they supported advocates for a democratic, secular, and non-nuclear Republic of Iran, and showed support for the opposition leader Mrs. Maryam Rajavi’s 10-point plan for the future of Iran, which calls for the universal right to vote, free elections, and a market economy, and advocates gender, religious, and ethnic equality, a foreign policy based on peaceful coexistence, and a nonnuclear Iran;

Whereas, on July 2, 2018, the Belgian Federal Prosecutor’s Office announced it had foiled a terrorist plot against the “Free Iran 2018–the Alternative” gathering held on June 30, 2018, in support of the Iranian people’s struggle for freedom;

Whereas Assadollah Assadi, a senior Iranian diplomat based in the Iranian Embassy in Vienna, Austria, was arrested in Germany in connection with the planned terror plot in Paris;

Whereas the Iranian diplomat has been charged in Belgium in connection with the Paris terror plot and in Germany with “activity as a foreign agent and conspiracy to commit murder”;

Whereas, on February 4, 2021, a court in Belgium sentenced Iran’s diplomat Assadollah Assadi to the maximum sentence of 20 years imprisonment for his role in planning to plant a bomb at the Free Iran gathering in 2018, and his 3 accomplices were given jail terms of 15 to 18 years and stripped of their Belgian citizenship;

Whereas Assadi took an Iranian-made bomb from Iran to Europe on a commercial flight, and delivered it to his accomplices with the aim of causing mass casualties at the Free Iran gathering in Paris in 2018;

Whereas the Belgium court found “that the four defendants are part of a larger terrorist group within a specific Iranian intelligence service. This appears from the sums of money paid to the defendants, the way information was gathered, the meetings in Iran, the use of diplomatic status, and the making and testing of the explosive device in Iran itself.”;

Whereas, on July 10, 2018, a senior Department of State official said, “Iran uses embassies as cover to plot terrorist attacks”, and that “The most recent example is the plot that the Belgians foiled, and we had an Iranian diplomat out of the Austrian Embassy as part of the plot to bomb a meeting of Iranian opposition leaders in Paris.”;

Whereas, in January 2019, the European Union (EU) included the Internal Security Division of the Iranian Ministry of Intelligence and Security (MOIS), and two of its officials on the EU terror list in connection with the Paris bomb plot;

Whereas according to the Select Iran-Sponsored Operational Activity in Europe, released by the Department of State on July 5, 2018, “Two Iranian operatives were arrested on charges of terrorism by Albanian authorities”, for a bomb plot against the March 2018 New Year gathering of thousands of Iranian opposition members in Tirana;

Whereas, in December 2018, the Government of Albania expelled Iran’s Ambassador, Gholamhossein Mohammadnia, and MOIS station chief in Albania, Mostafa Roudaki, for planning terrorist activities against Iranian dissidents and members of the People’s Mojahedin Organization of Iran (PMOI/MEK);

Whereas, in January 2020, the Government of Albania expelled two other Iranian diplomats also for planning terrorist activities against the MEK;

Whereas the expulsion of the Iranian Ambassador by the Government of Albania is a positive and important step, which sends the right message that no Iranian embassies should be used for plotting terror and conducting spying activities against dissidents;

Whereas Iran’s malign activities in the Balkans, specifically its presence and activities in Albania, pose a serious threat to United States national security interests;

Whereas the Department of State has urged “all nations to be vigilant about Iran using embassies as diplomatic cover to plot terrorist attacks”; and

Whereas the United States Government arrested two Iranian nationals in August 2018 who had acted on behalf of the MOIS to conduct covert surveillance in the United States against officials of the National Council of Resistance of Iran for a target package, which, according to the Department of Justice Federal complaint, may include “apprehension, recruitment, cyber exploitation, or capture/kill operations”, and that they pleaded guilty and were sentenced to imprisonment: Now, therefore, be it

Resolved, That the House of Representatives—

(1) condemns past and present Iranian state-sponsored terrorist attacks against United States citizens and officials, as well as Iranian dissidents, including the Iranian regime’s terror plot against the “Free Iran 2018–the Alternative” gathering in Paris;

(2) calls on relevant United States Government agencies to work with European allies, including those in the Balkans where Iran has expanded its presence, to hold Iran accountable for breaching diplomatic privileges, and to call on nations to prevent the malign activities of the Iranian regime’s diplomatic missions, with the goal of closing them down, including the Iranian Embassy in Albania;

(3) stands with the people of Iran who are continuing to hold legitimate and peaceful protests against an oppressive and corrupt regime; and

(4) recognizes the rights of the Iranian people and their struggle to establish a democratic, secular, and nonnuclear Republic of Iran.