President Hassan Rouhani’s whirlwind visit to Europe last week was an indication both of how eager Iran is to shed its pariah status and of how eager western countries are to resume trade and financial relations now that international sanctions are being lifted. Dozens of contracts running into billions of dollars were discussed. He met the pope, the Italian prime minister, the French president, and many business leaders.

The security services continue to harass and detain activists, writers and journalists 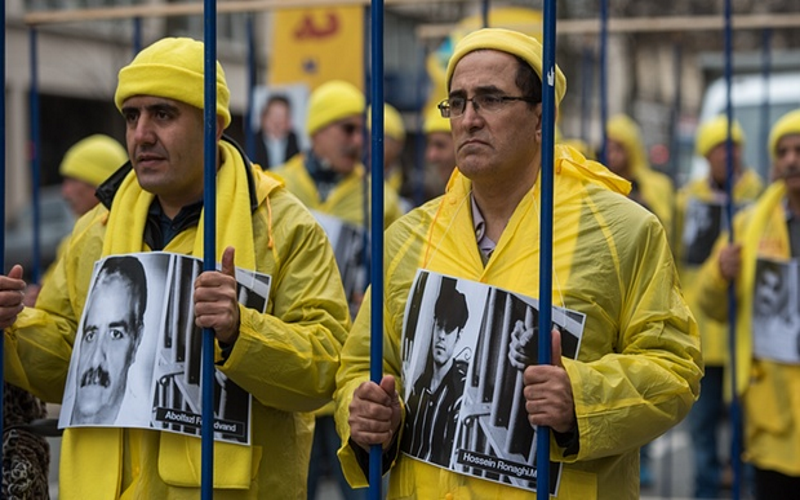 After years of tensions and mistrust, the scenes of a smiling Iranian leader being welcomed with open arms in European capitals were in stark contrast with the recent past. Yet in spite of the feelgood imagery, to believe that Iran’s regime has altogether transformed itself and might now be moving towards decisive domestic reform and a constructive role on the international stage would be naive and shortsighted.

Iran may have a president with a “moderate” profile – one whose smooth approach comes as a relief after the Ahmadinejad years – but that does not mean the authoritarian nature of the regime or the objectives of its foreign policy have changed. Iran still ranks as one of the most repressive states in the world, and there has been no improvement.

The government was probably looking for a public relations bonus in the west when it recently released a number of journalists, but the statistics tell another story: in 2015 Iran executed at least 830 people, including juveniles, many for non-violent crimes. The security services continue to harass and detain activists, writers and journalists. The methods used by the regime to crush the pro-democracy Green movement in 2009 are still very much in use today.

Nor has Iran become in any way more “moderate” in its behaviour in the Middle East. In Syria, Iran’s militias and Republican Guards are direct participants in the war crimes that the Assad regime inflicts on its own population. Iran’s close ally Hezbollah played a key role in the siege of Madaya, where children died of hunger as a result, and it is part of similar operations elsewhere.

It is to be hoped that a sustained implementation of the nuclear agreement will improve international security. But to draw from that the notion that Iran must now be spared any reproach would be foolish. Iran’s hardliners sought economic relief through the nuclear deal because they desperately want to keep their hold on power, not because they want to pursue a more democratic path at home or more rational policies abroad. Diplomacy is important, but it must not come at the expense of clearsightedness, nor should it be accompanied by the kind of simplistic analysis that puts the sole onus on Saudi Arabia rather than on Iran as far as human rights are concerned. The records of both countries are equally dismal.

In the reporting of President Rouhani’s visit, the covering up of nude statues in Rome, supposedly to spare the Iranian delegation a sight they would find objectionable, was treated as a sort of comic interlude. But it is hardly a laughing matter that, while its president was on a charm offensive in Europe, Iran’s military forces were carrying on their brutal operations in Syria as usual. It is Iran’s responsibility for the crimes that have generated the refugee crisis that is the true obscenity, not a few nude statues in the Capitoline museum

Struan Stevenson expressed his concern that the people of Europe have been fooled into thinking that Rouhani is a moderate president. It is a regime that disrespects women, exports terrorism and he said it is “disgraceful” that he has been invited and welcomed into Paris. Stevenson, when asked if he has a message to people in the Middle East, said: “Do not think that everyone in Europe welcomes Rouhani.” He said that the thousands of people out protesting were proof of this. 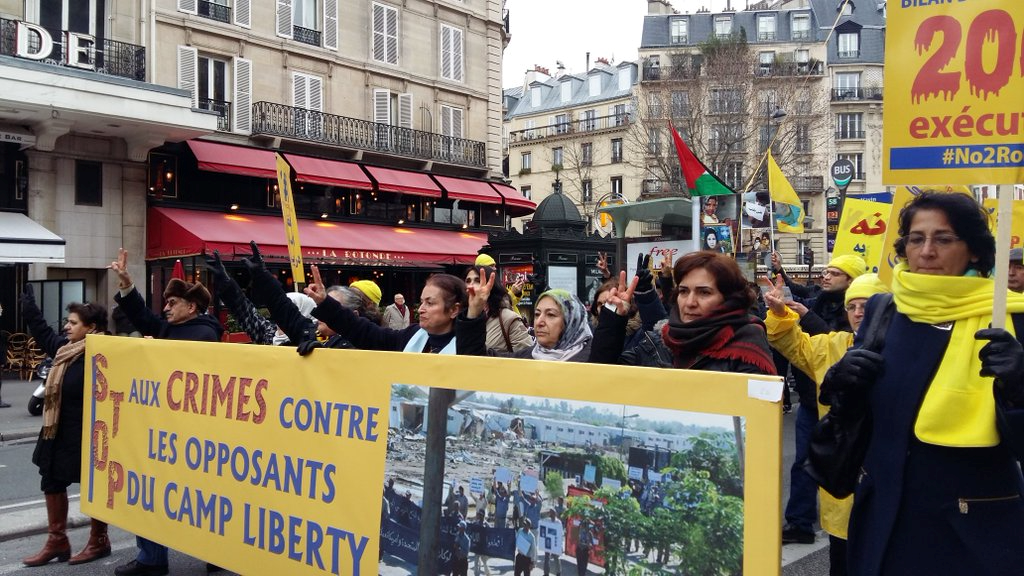 14:45 Paris local time:
Jacques Boutault, mayor of the 2nd district of Paris, said he is “ashamed for his country”. He is ashamed that purely for business reasons his country is playing host to a world leader that has no respect for the people of his country. 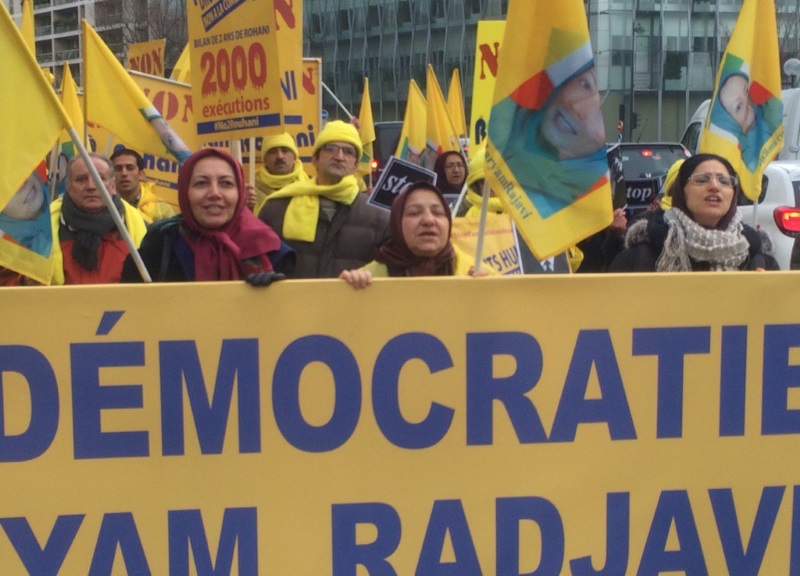 14:40 Paris local time:
Jean- François Legaret, mayor of the 1st district of Paris, said that he is there to support the Iranian Resistance led by Mrs. Rajavi. “Long live liberty”, he said. 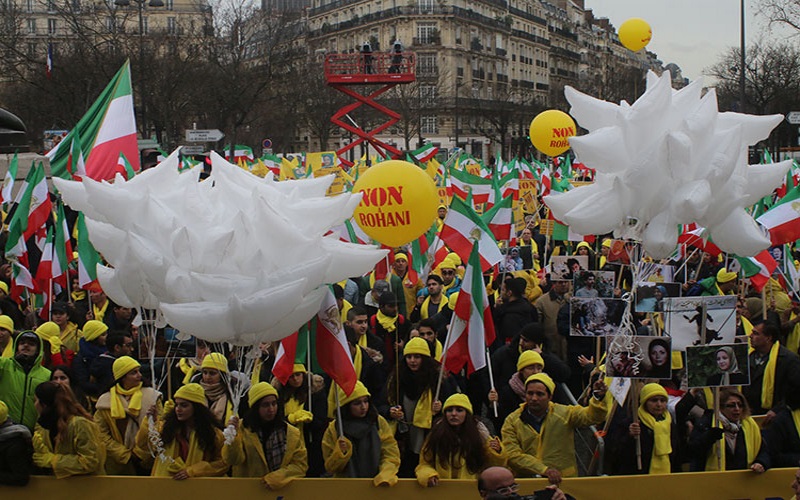 14:30 Paris local time:
A delegation of French Mayors took the stage in the rally and declared their support for the protesters. A large group of French mayors have recently issued a joint statement supporting the Iranian Resistance. 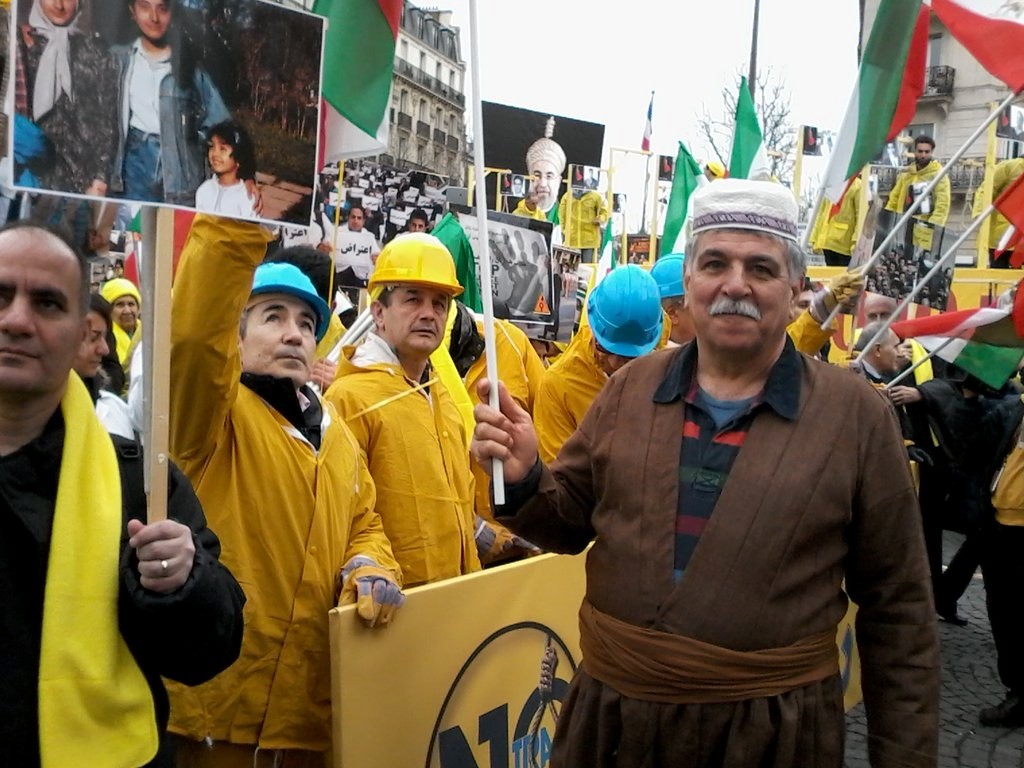 14:15 Paris local time:
Mr. José Bové, member of European Parliament from France: We do not accept that people of Iran be under the thumb of religious dictatorship. We support Maryam Rajavi.

14:10 Paris local time:
Mr. Alejo Vidal-Quadras, the former vice-president of the European Parliament: Hassan Rouhani is the president of 2000 executions and he is not welcomed here. 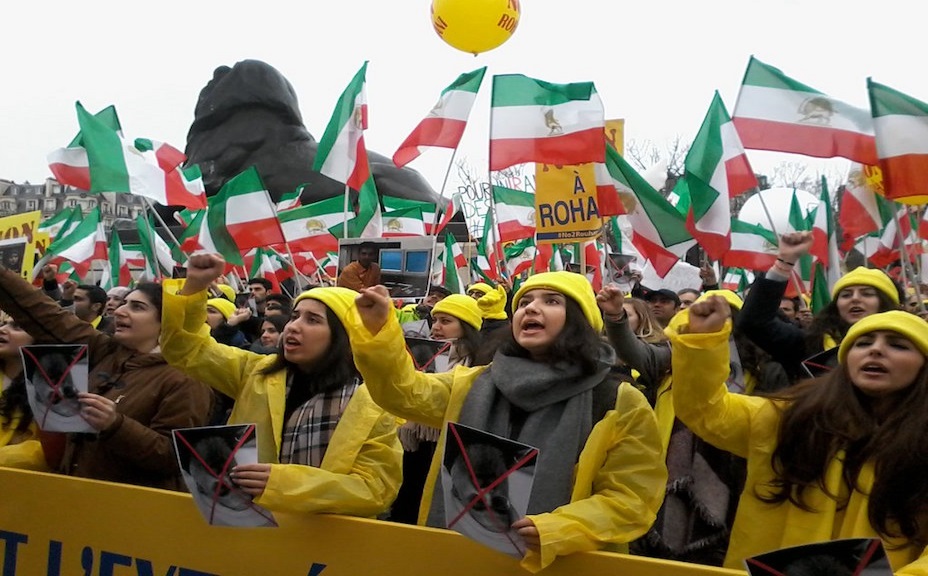 14:00 Paris local time:
Mr. Giulio Maria Terzi, former foreign minister of Italy: The regime in Tehran is a murderous  regime which supports terrorists groups in the region. We can not let it to be accepted to the international community.

13:50 Paris local time:
Mrs. Rama Yade, France’s former Human Rights Minister said: It is the responsibility of us to tell the French people that Hassan Rouhani is not a ‘moderate’. 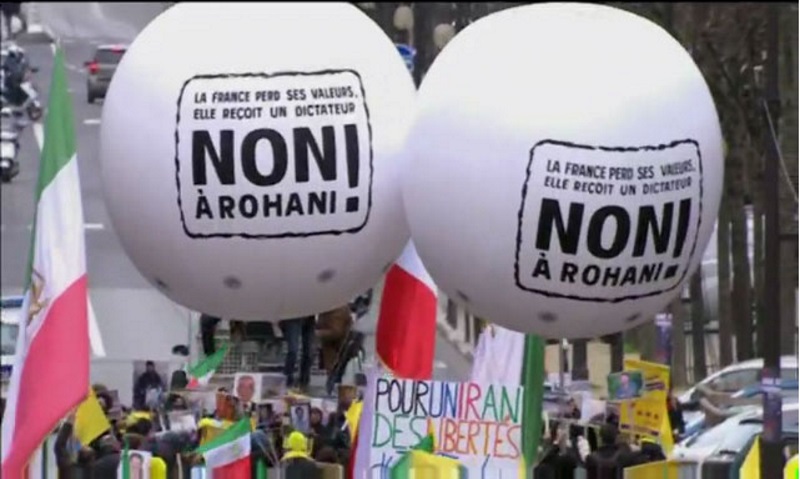 13:40 Paris local time:
The  first speaker at the event was Mr. Struan Stevenson, the former head of the Delegation for Relations with Iraq at the European Parliament.

13:31 Paris local time:
The historic Denfert-Rochereau Square in the center of Paris is covered with thousands of people waving yellow signs and three colored Iranian flag call for  end to executions in Iran. They hold signs reading: “No to Rouhani.” 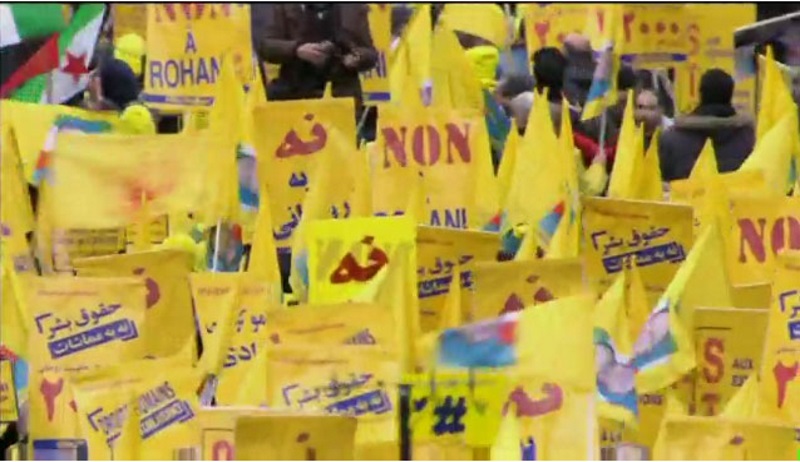 12:30 Paris local time:
As the Hassan Rouahni visits Europe, photos of Syrian children have been published with posters calling on Hassan Rouhani to stop his intervention in the country’s affair.

The Indepent publishing the photos wrote that the anti-regime activists have said the Iranian regime’s support for the Syrian dictataor Bashar al-Assad is leading to civillian deaths in Syria.

12:20 Paris local time:
Delegations representing the peoples of Syria and Yemen join the rally. They will deliver speeches and take part in the march to show their solidarity.

12:15 Paris local time:
The protesters gathering at the Denfert-Rochereau Square in the center of Paris to protest violations of human rights in Iran and visit by Hassan Rouahni, the president of clerical regime in Iran carry signs in French and Persian languages reading: ” No to Rouhani”, ” Stop Executions in Iran” , ” Rouhani is not representing Iranians.”

12:00 Paris local time:
The protesters gathering at the Denfert-Rochereau Square in the center of Paris to protest violations of human rights in Iran and visit by Hassan Rouahni, the president of clerical regime in Iran carry signs in French and Persian languages reading: ” No to Rouhani”, ” Stop Executions in Iran” , ” Rouhani is not representing Iranians.” 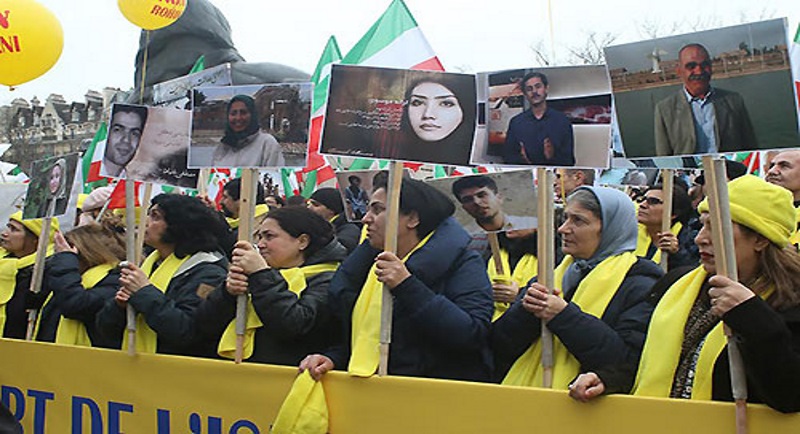 11:00 Paris local time:
The arrival in Paris of Hassan Rouhani, the president of the clerical regime in Iran, has been met with a wave of protests by Iranians. They held a protest on Wednesday before the arrival of Hassan Rouhani in Paris, Reuters television reported.

10:50 Paris local time:
European politicians and members of French National Assembly is expected to speak at the Iranians’ rally in Paris on Thursday.

Mr. Giulio Maria Terzi, who served as foreign minister of Italy from November 2011 until March 2013 wrote in a article published on Wednesday: “Italy, France and the European Union should not only use Rouhani’s visit to explore trading opportunities. First and foremost Rouhani’s visit should be a test of his willingness to change Iran’s egregious conduct and an opportunity to hold him accountable for his actions.”

“If Iran needs to open up its economy vis-a-vis the EU and the West, the Iranian president should be reminded that unless the regime truly moderates its conduct, the West will have no political appetite for investment or improved relations.”

Members of the Iranian opposition demonstrated on Tuesday in Rome against executions in Iran and the October 29 missile attack on Camp Liberty in Iraq, the Italian news agency ANSA reported.

The protesters condemned the Tehran regime’s export of Islamic fundamentalism and its support for the Syrian dictatorship and the continued slaughter of Syrian citizens.

‘Rouhani has to be tried for crimes against humanity’, they chanted. Some signs showing the executions in their country and ‘genocide of Iranian refugees at Camp Liberty and the massacre of the Syrian people’ were displayed.

The event was supported by organizations in defense of human rights like Hands off Cain that has also organized a campaign against the unprecedented wave of executions in Iran, Rai 1 TV reported.

Terrorists, torturers and Revolutionary Guards are accompanying the Iranian regime’s President Hassan Rouhani in his trips to Italy and France, the National Council of Resistance of Iran has revealed.

NCRI published the record of some of his entourage.

Maryam Rajavi, head of the Paris-based National Council of Resistance of Iran said: “Rolling out the red carpet for Rouhani by European governments is to welcome the godfather of terrorism and fundamentalism.”

Iranians are gathering in the historic Denfert-Rochereau Square in the center of Paris to protest violations of human rights in Iran and visit by Hassan Rouahni, the president of clerical regime in Iran.

Iranians and their international supporters have been campaining for a week of campaigning since last week Sunday to protest the wave of executions in Iran and Tehran’s export of terrorism and extremism and their support for Bashar al-Assad in the massacre of the people of Syria.

Today, 28 January, the campaigning will come to a climax when there will be a major rally in Paris