Tirana, Albania, August 12, 2017 – Mrs. Maryam Rajavi (left), the President-elect of the National Council of Resistance of Iran meeting a senior delegation from the United States Senate. The two sides discussed the situation of members of the Mujahedin-e Khalq in Albania and the recent developments in Iran and the Middle East.

THE HUFFINGTON POST – While August seems usually a passive time of the year in politics, it has been quite the opposite for Iran and the wide variety of developments around this controversial international dossier.

A senior delegation of United States Senators travelled to Tirana, the capital of Albania, today, August 12, 2017, to meet the Iranian opposition leader Maryam Rajavi, who heads the National Council of Resistance of Iran.

The delegation, Senators Roy Blunt, Vice President of the Republican Conference, and member of the Appropriation, Select Intelligence, Rules and Administration, and Commerce, Science, and Transportation committees; John Cornyn, the Majority Whip, and a member of the Judiciary, Select Intelligence, and Finance committees; and Thom Tillis, a member of the Armed Services, Judiciary, Banking, Housing and Urban Affairs and Veterans’ Affairs committees, also visited members of the People’s Mojahedin Organization of Iran (PMOI/MEK) in the Albanian capital. 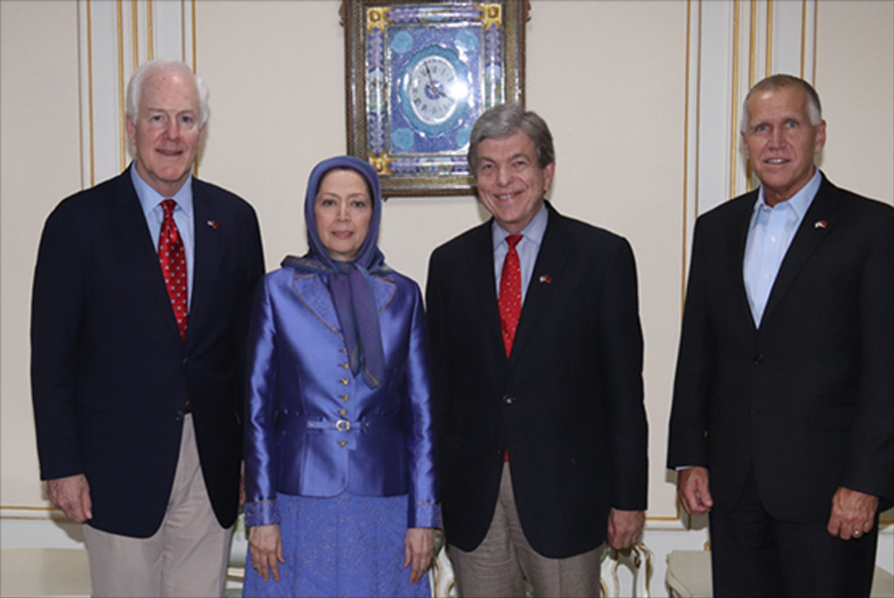 The NCRI is a political coalition calling for regime change in Iran and considered the main threat to Tehran’s mullahs. The MEK is the main member of this coalition of a variety of Iranian dissident groups and individuals.

“Led by Senator Blunt, the delegation congratulated the safe and secure relocation of all Camp Liberty residents outside of Iraq and wished them success in their struggle for democracy and human rights in Iran,” according to an NCRI statement.

Rajavi expressed her gratitude for the tireless efforts of the U.S. Senate, particularly Senator Blunt, regarding the protection of thousands of MEK members in Iraq, and their safe relocation to Albania.

Senator Blunt was among several American dignitaries, including senior former officials, who at a July 2014 Senate briefing strongly condemned Iran’s highly destructive role in Iraq. While describing Tehran as part of the problem plaguing Baghdad and the entire country, Senator Blunt joined the initiative in demanding the urgent transfer of PMOI/MEK members stationed in a former US military base known as Camp Liberty near the Iraqi capital.

Senator Blunt and his colleagues John McCain (R-AZ) and Jeanne Shaheen (D-NH), and former Senator Carl Levin had urged former Secretary of State John Kerry to “press for the protection of Camp Liberty and to expedite the resettlement of the Camp Residents to countries outside Iraq, including the United States.” 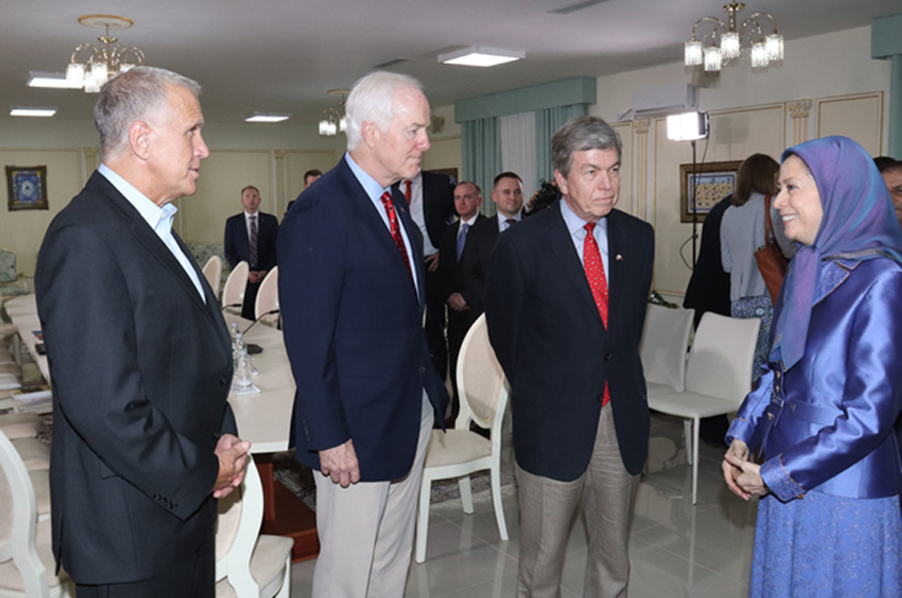 Earlier in April, Senator McCain, a long supporter of the Iranian opposition and a staunch critic of Tehran’s policies, also visited the MEK in Albania and met with Rajavi. MEK members were able to depart Iraq after a long 4½ year ordeal in Camp Liberty following a forced transfer from their 26-year home in Camp Ashraf, northeast of Baghdad. From 2009 following the transfer of their security from the US military to the Iraqi government, the MEK came under eight major ground and missile/rocket attacks staged by Iran-backed proxies against Ashraf and Liberty. This was parallel to a seven-year logistical and medical siege closing them off from the outside world. After losing over 160 of their colleagues to the attacks and blockade, MEK members were finally able to transfer out of Iraq to a variety of European countries, mainly Albania.

Saturday’s high-profile visit by the senior U.S. Senators comes at a time when Washington has slapped major new sanctions against Iran for its ballistic missile drive, support for terrorism and human rights violations. Iran’s Revolutionary Guards is now subject to sanctions under Executive Order 13224, and Specially Designated Global Terrorists. Considering the Guards control over 40% of Iran’s economy, these new sanctions come as a heavy blow to Tehran’s future ambitions. Analysts believe this visit sends a strong signal to Tehran over how the NCRI is gaining momentum through a growing consensus in Congress over the necessity of adopting a policy of regime change vis-à-vis Iran. This time last year Iran’s ruling clerics appeared determined on weakening or dismantling the PMOI/MEK. Only a year later, the tides have turned and it is the Iranian opposition that is now on the offensive. More such developments threatening the very pillars of Iran’s rule are most likely set to come in the near future.