September 20, 2017
New York United Nations Plaza
Good afternoon everyone, welcome to my hometown, New York City. [applause] When I look up I see all these wonderful signs.  They’re all wonderful, but the one I like the best says “Free Iran.” [applause] [chanting] The Iranian people are great people, but right now they are being kept down by leadership that strangles them.  But we’re not going to allow that leadership to continue to strangle, we’re going to fight until we have a free Iran. [applause] Now change can come from within.  There are many young people in Iran, people who have only known oppression, have only known this horrific government, have only known things that are against the Iranian people.  And we believe that from within change can come because the Iranian people have always been leaders, have always been able to do what’s right, and this terrible regime that strangles the Iranian people has got to end—and the sooner the better. [applause]

Now when you look at Iran, the government of Iran, the illegal government of Iran, what they do is they provoke war and hatred and support terrorism. Hezbollah is a terrorist group, been declared so by the United States, and Hezbollah is under the thumb and the Iranian regime is under the thumb of Hezbollah.  Hezbollah is a proxy of Iran, a proxy to do bad things for the Iranian people, and we are not going to stop until the Iranian people are free once again. [applause] Now I can tell you that you have a lot of friends in the U.S. Congress on both sides of the aisle.  And I can tell you nothing gave me greater pleasure just as within the past year to go to Iran and Albania and meet people from Camp Liberty to help get them out, to make sure that they were safe.  I was very pleased we were able to do that. [applause] Thank you, thank you for your courage. I want to tell you that as long as I’m in Congress—and I’ve been there for 29 years—I will continue to fight for freedom for the Iranian people, continue to say [applause] continue to say [1:15:56] continue to be free.

Every day, people are being executed in Iran for being political prisoners and speaking their minds.  We say that these kinds of executions need to stop and the alignment of the Tehran regime with terrorism has got to end—and the sooner the better. [applause] I’m sure you all know that two years ago when we had the opportunity to vote on the agreement between Iran and the United States and the other nations, the 5+1, I was very, very proud to vote against that agreement in the United States Congress.  [applause] It was well-intentioned, but when you look at the agreement and you read the agreement, you see that it doesn’t prevent the Iranian regime from having a nuclear weapon.  It simply postpones it for 15 years.  It simply means that in the year 2030 Iran can become a nuclear threshold state.  And I don’t know about you, but I don’t want nuclear power or nuclear bombs to be in the hands of the bloody, murderous regime in Iran. [applause]

So I want to make you this pledge. I want to pledge to you that I will work with all my colleagues on both sides of the aisle, work with all the government officials, keep the pressure on the regime which hurts the Iranian people, and continue to demand that the Iranian people have the same rights as the American people of free and fair elections showing what the Iranian people really want.  Only then can change come from within.  And I have no doubt if and when that referendum is held in Iran we will be able to go to Iran and watch the Iran people in democracy, not in a government that hurts them, kills them, does everything that’s bad for them.  We have to say that the United States must always stand with the freedom loving people of Iran.  I want to pledge to you that I will continue to fight for a free Iran, will continue to fight for all the things we want. And I want to thank all of you for your great courage in coming here and saying free Iran.  God bless you and God bless the Iranian people. [applause]

August 12, 2017
Organization of Iranian-American Communities-US (OIAC), the largest, most active grass root body of Iranian Diaspora in the United States, and other peace seeking Iranians and Americans NGOs, invites all concerned citizens to join the supporters to the “Free Iran Rally”, scheduled for Wednesday, September 20, 2017 outside the United Nations Headquarters in New York City.

The gathering will bring thousands to the U.N. against the backdrop of increasing executions in Iran just as the U.N. General Assembly meetings convene. This year’s rally coincides with shocking new revelations about the 1988 Massacre of some 30,000 political prisoners in Iran. Those with direct involvement in the massacre hold the highest positions in the current government of Iran. Rally participants will call on the United Nations to hold them accountable for this crime against humanity. 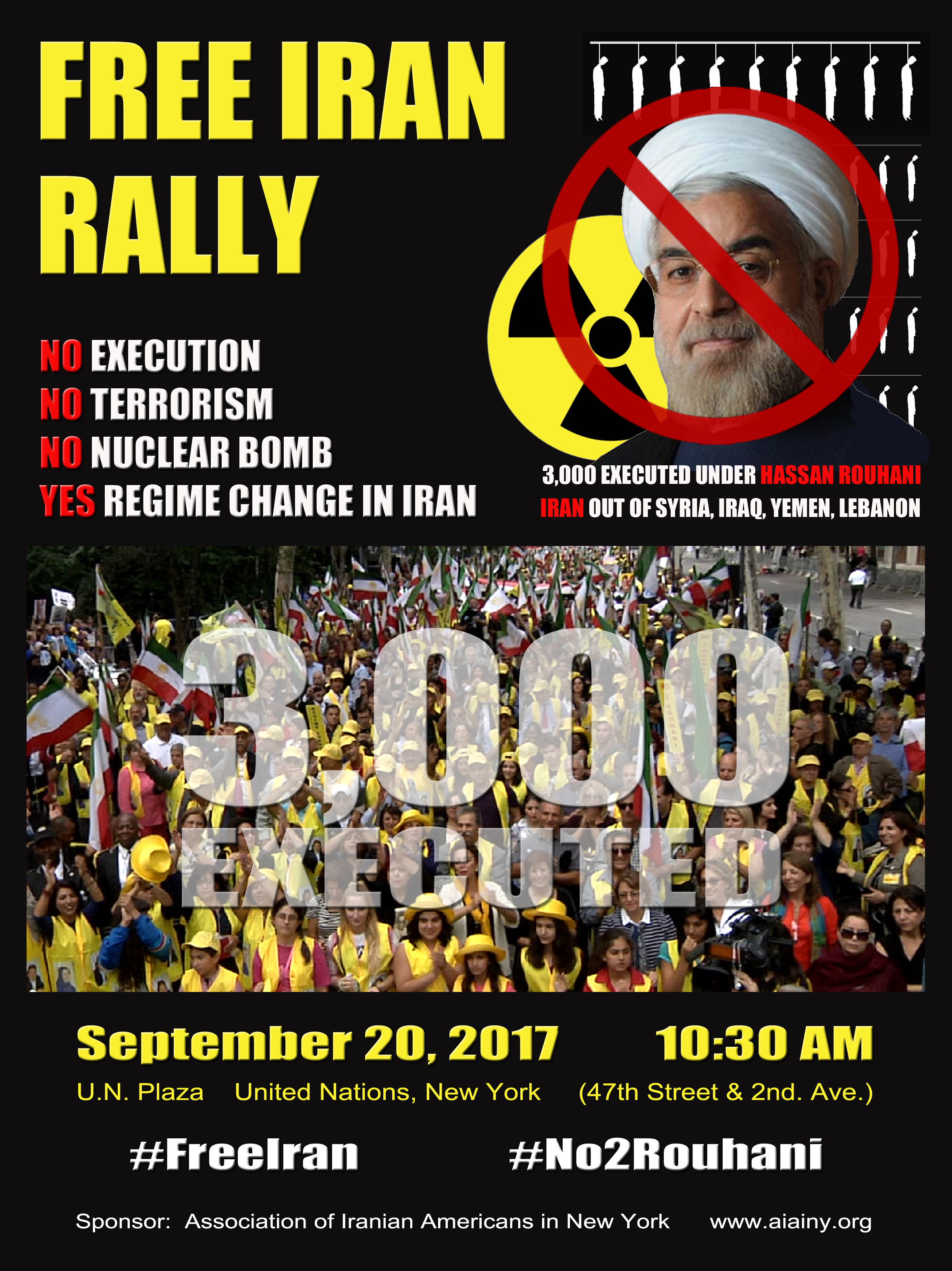