Saeed Abedini says he was tortured in Tehran’s Evin prison

Tuesday, 26 January 2016
One of the Iranian – American Prisoners, Saeed Abedini, who was part of a American-Iranian prisoner swap, said in a television interview aired on Monday that he was tortured and left in solitary confinement for refusing to sign a false confession and saw other prisoners being taken to be hanged. 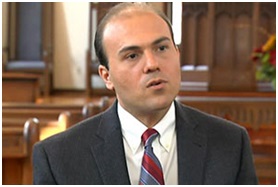 Saeed Abedini was imprisoned in 2012 on charges of setting up home churches in the Islamic theocracy. He was detained while building a orphanage in his native country Iran.
Abedini told Fox News that while in Tehran’s Evin prison he was beaten by interrogators, left with dangerous prisoner who tried to kill him and watched people screaming and crying while taken to be hanged.
‘Yes, in interrogation once they beat me very badly because they wanted me to write something I didn’t do …

Actually it was in a courtroom that the judge closed the door and the interrogators started beating me, and at that time I got a stomach bleeding,’ he told Fox News.
‘The worst thing that I saw was when they took some Sunnis for execution…Most of them were Sunnis, some of them were political prisoners…. I can say most were executed for their faith.’ Soldiers would tape the hands and feet of the frightened men, who were yelling and crying, he said. ‘It was very graphic pain when they took people for execution.’

Abedini said he also saw other prisoners undergo torture. Groups of Sunni Muslims who had been imprisoned only because of their faith were hanged on a weekly basis, he said.