Photos of Tens of thousands killed by Iranian regime

Iranian-Americans Fill D.C. with Photos of Tens of Thousands Killed by Iranian Regime

WASHINGTON, DC – Iranian-Americans transformed the grassy field in front of the reflecting pool on the west side of the U.S. Capitol this weekend into a stunning exhibit featuring the photographs of thousands of those, including teenagers, among the 120,000 who the Iranian regime has slaughtered since it took power in 1979.

More specifically, the sea of black and white photographs of the dead commemorated the 1988 massacre of 30,000 political prisoners and the 2019 killings of more than 1,500 in a student uprising against the dictatorship.

The solemn event, put on by the Organization of Iranian-American Communities, is part of a huge Iranian diaspora headquartered in Albania with supporters of The People’s Mojahedin Organization of Iran (PMOI), also known as Mujahedin-e-Khalgh (MEK), spread around the world, including the U.S.

The MEK and its affiliated National Council of Resistance of Iran (NCRI) constitute the most prominent dissident organization in Iran.

Breitbart News spoke to survivors who took part in the program, including Roya Johnson, who was arrested when she was 14 for political activism and spent more than two years in prison.

“This is very emotional for me,” Johnson said, her voice cracking when asked what her experience was like behind bars.

She said she and other prisoners were “beaten with cables” until they fainted from the pain. She said prisoners were forced to watch the torture of fellow prisoners. Her father raised almost $3 million to gain her release and the family fled to Pakistan, and then to the U.S., where she resides today.

“Holding [the regime] accountable” for its horrific crimes is what Johnson said she is fighting for because they continue today.

“What is really urgent is the safety of political prisoners,” Johnson said.

A fact sheet about the regime’s human rights crimes and abuses said many of the people responsible for the mass murders are still in power in Iran, including Judiciary Chief Ebrahim Raisi.

Glenn Allen Torshizi told Breitbart News that while his elderly mother is still alive in Iran, he lost three brothers.

“I am the only survivor of four brothers,” Torshizi said.

“My younger brother Behrooz was very gifted and talented,” Torshizi said in a speech he gave at the event. “He was a supporter of the MEK when he was studying in college. In 1981, one day, he left home and we never saw him again.”

The family later learned that he had been executed.

“The news was a shock to our family,” Torshizi said. “My father reached out to the inspector general’s office. The cleric told my father, ‘Your son had a camera and was taking pictures of a MEK demonstration.’”

“These criminals are still in charge, the same people who killed my brother,” Torshizi said. “They sentenced him to death without access to a lawyer. They tortured him for 17 days, killed him, and buried him in the Behesht-e Zahra Cemetery without telling my family.” 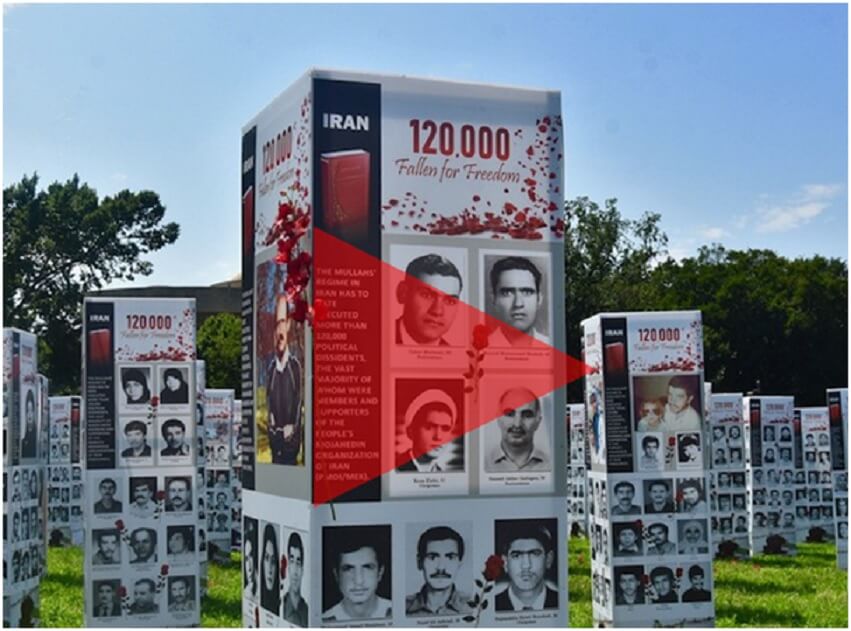 Members of Congress from both sides of the aisle addressed the crowd virtually.

“My thoughts and prayers are with those who knew people or had relatives killed in the 1988 massacre,” Rep. Debbie Lesko (R-AZ) said. “I am a co-sponsor of the House resolution that condemns the regime and calls for a non-nuclear Iran. I appreciate what you’re doing and stand with you to support your mission.”

“I join you to condemn the 1988 massacre,” Rep. Angie Craig (D-MN) said. “I join the thousands who raise their voices to call justice for the victims. We both have a history of disavowing the terrorism of the regime against the people of Iran. I will continue to support you.”

Despite the somber tone of the event, Ramesh Sepehrrad, an OIAC advisory board member, said it is also hopeful.

“We didn’t gather here in sorrow,” Sepehrrad said. “In fact, we gather here inspired by what people have done and the ultimate sacrifice they have made. “The journey to a free Iran has been long but it is an absolute destination that we will get to.”

Roya Johnson summed up the purpose of the event to Breitbart News: “[The] ultimate goal, of course, is freedom.”

Decades of Rights Violation in Iran