June 20, 2016—Political prisoners held in the Women’s Ward at Iran’s Evin Prison are routinely denied medical care and hospitalization, face severely restricted or denied visitation rights even with their young children, are deprived of regular telephone contact with their families, and are not provided adequate nutrition, according to a report released today by the International Campaign for Human Rights in Iran. 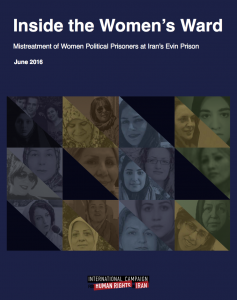 These conditions, detailed in accounts by current and former inmates of the Ward, violate Iran’s State Prison Procedures and its international obligations regarding prisoner treatment. The Campaign calls on the Iranian Judiciary, which has authority over Iran’s prisons, to immediately review these inmates’ cases and address the unlawful conditions in the Ward.

“These women, who have done nothing more than peacefully express views or beliefs that the Government of Iran disagrees with, never should have been imprisoned to begin with,” said HadiGhaemi, executive director of the Campaign, “and now they also suffer inhumane conditions that leave these women with permanently broken health.”

There are known to be at least 25 inmates at Evin’s Women’s Ward at present—all prosecuted without due process and convicted in sham trials for peacefully exercising their rights to freedom of expression and belief.

These women have been put behind bars for sentences ranging from one to twenty years for “crimes” such as protesting the death penalty, speaking out for women’s rights, posting criticism of government policy on social media, believing in the Baha’i faith, and defending other political prisoners.

Because they are political prisoners, they endure harsher conditions than other prisoners: they are not provided telephone privileges to call family which prisoners in other wards are provided, visits—even between inmates and their young children—are frequently restricted or, as punishment, denied, and they are routinely refused furlough, the temporary leave afforded to most inmates in Iran.

Excerpts from the prisoners’ accounts from Inside the Women’s Ward:

“Sanitary and health conditions are a disaster. The infirmary has dispensed wrong medications with total impunity.”

“The process for transferring patients to outside medical facilities can take nine months to a year, depending on how critical their condition is. Even then the officials often break their promises….”

“There’s no telephone there. Mothers are always very worried.”

“When we were in prison we were very careful not to organize any group protests that would affect the mothers because they were the first ones to get punished by cutting visits with their kids. It was a cruel way of silencing the Women’s Ward.”

“It’s been about a year now that red meat and dairy products have been eliminated from prison rations.”

“We had an electric heater that had been purchased with money collected from the prisoners themselves. You couldn’t survive Evin Prison’s winter without them. This year, the authorities have given those heaters to the guards and the prisoners are shivering from the cold.”

The report presents extensive excerpts from Iran’s State Prison Procedures, showing these conditions violate Iran’s own laws. According to the prisoner testimony contained in the report, the inmates repeatedly reported the conditions in the Ward to Iran’s Judiciary, but the Judiciary, headed by by Sadegh Amoli Larijani, has taken no action.

“Inside the Women’s Ward reveals the cruel and unlawful deprivations these brave women suffer because peaceful dissent is treated as a crime in Iran,” said Ghaemi.

The Decreasing Popularity of President Rouhani

IRAN MURDERED THOUSANDS OF MEK MEMBERS DURING THE SUMMER OF 1988