Estimated at little over 80,000,000, Iran comprises about 1% of the global population. With over 1/2 million pandemic Deaths to date, however, the country carries an estimated 9% of the global COVID-19 death toll.  This disproportionally high death rate is directly attributed to clerical regimes weaponization of the pandemic against its own population – primarily to suppress dissent.

Based on the most conservative estimates the number of coronavirus fatalities in Iran has horrifically surpassed the half-million mark. This unprecedented catastrophe is the result of the regime’s criminal and plundering policies, especially regime Supreme Leader Ali Khamenei and the Revolutionary Guards (IRGC) with a strategy focused on maximum casualties in order to prevent nationwide uprisings.

Deception, lies, plundering the people, banning the import of foreign vaccines, refusing to provide support for workers and hardworking Iranians from the massive wealth usurped by Khamenei and the IRGC, and leaving the people indefensible in the face of Covid-19 are among the regime’s measures that multiplied the pandemic’s fatality rate in Iran. Without a doubt, these are crimes against humanity. Khamenei and regime officials need to face justice for these horrific crimes.

Over 500,000 people have died of the novel coronavirus in 547 cities checkered across all of Iran’s 31 provinces, according to reports tallied by the Iranian opposition People’s Mojahedin Organization of Iran (PMOI/MEK) as of Tuesday afternoon local time, January 25. The official death toll declared by the regime stands at 132,274, around a fourth of the actual figure.

The regime’s Health Ministry announced the mullahs’ engineered Covid-19 numbers from the past 24 hours on Tuesday as 23 deaths and 9378 new cases. The number of new cases indicates a 250 percent increase in comparison to two weeks ago today. Furthermore, 1241 patients are in ICUs and 632 of the new cases have been hospitalized.

“We committed a grave mistake in emphasizing reopening schools and universities and returning to normal conditions. The world is in critical condition. In Tehran with a population of ten million even one percent of the population contracting the virus means 100,000 people becoming ill,” said Hamid Emadi, a member of the National Covid-19 Task Force Scientific Committee said on Tuesday, according to the semi-official Shafaqna news agency.
“The number of new cases is on the rise and positive PCR results have increased five-fold. During the past two weeks, we have gone from four percent to 18-19 percent. The number of people contracting the virus and seeking medical care has increased,” said the Health Network director in Razavi Khorasan province on Tuesday, according to the Mehr news agency, an outlet linked to the regime’s Ministry of Intelligence and Security (MOIS).

In Mazandaran province, some areas are once again being registered as yellow zones and in less than two weeks they will be indexed as orange or even red zones, according to a report published on Tuesday by the state-run Entekhab daily. The number of people hospitalized has increased to 300 and the number of people seeking Covid-19 tests is also significantly escalating, the report adds.

“The number of new cases per day has increased by 30 percent. The number of patients seeking medical care in hospital emergency centers has increased in a way that we are even seeing large crowds in these centers,” said the dean of Bushehr Medical Sciences University on Tuesday, according to the regime’s official IRNA news agency.

“During the past 24 hours 80 coronavirus patients have been hospitalized. We currently have 287 patients hospitalized, of which 66 are in ICUs,” said the spokesperson of Yazd Medical Sciences University on Tuesday, according to the semi-official ISNA news agency. 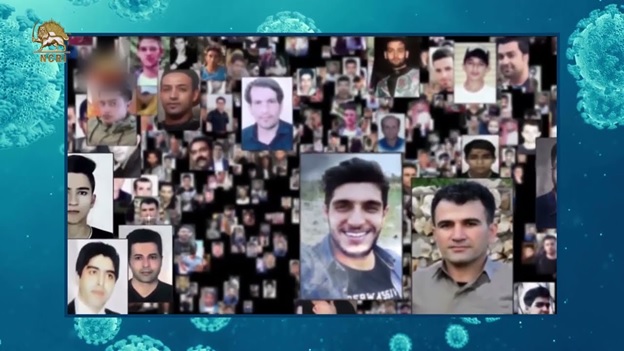 The1988 Massacre of Political Prisoners in Iran: Eyewitness Accounts