Peaceful protests by Iranian people turned deadly when security forces opened fire on people.
Sources say at least 3 dead in this city as of now.

Jan.02 — The death toll in Iran has climbed as security forces clashed with demonstrators voicing their discontent with the country’s leaders. Bloomberg’s Golnar Motevalli reports on “Bloomberg Daybreak: Europe.

#IranProtests- Masjed Soleiman, khameneie photo was teared up by protestors 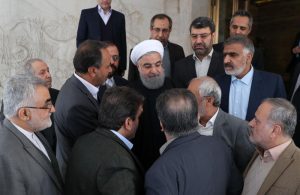 ISTANBUL – Iranian authorities confronted widening, at-times violent, street protests Tuesday centered in the country’s provinces, which have traditionally been a pillar of government support and prime recruiting ground for security forces. Six days of demonstrations have left at least 20 people dead – including nine on Tuesday – and appear driven by Iranian workers, who have clashed with security forces in locations around the country. The protesters’ chants and attacks on government buildings have broken taboos in a system that brooks little dissent.

A number of Iranians have died amid ongoing nationwide anti-government protests that began last week in various cities across Iran. Nine Iranians were killed in Isfahan province alone during anti-government protests on Monday night. State TV said on Tuesday that six people were killed in Isfahan’s central town Qahderijan – during a raid on a police station – and one more in Khomeinishahr. According to state media, the rioters were attempting to break into the station to obtain weapons.