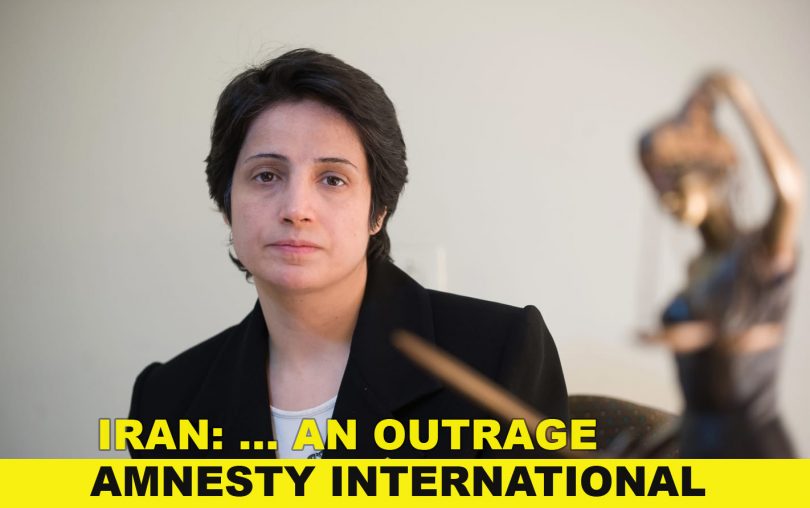 Nasrin Sotoudeh was arrested at her home in Tehran this morning and transferred to the prosecutor’s office of Evin prison, according to her husband, Reza Khandan.

In an interview earlier today with Manoto News, a Persian language news channel broadcast from outside Iran, Reza Khandan also revealed that Nasrin Sotoudeh was told she was being arrested to serve a five-year prison sentence. However, neither he nor Nasrin Sotoudeh knew anything about this sentence.

Nasrin Sotoudeh has dedicated her life to fighting for human rights in Iran. She has won international awards but has also paid a high price for her courage, spending three years in jail. Her arrest today is the latest example of the Iranian authorities’ vindictive attempts to stop her from carrying out her important work as a lawyer

Philip Luther, Research and Advocacy Director for the Middle East and North Africa at ‎Amnesty

“We call on the Iranian authorities to release Nasrin Sotoudeh immediately and unconditionally. Any action short of this must be unreservedly condemned by the international community.”

In recent weeks, Nasrin Sotoudeh has spoken out against the application of a Note to Article 48 of Iran’s 2015 Code of Criminal Procedure. The Note to Article 48 denies individuals facing some offences, including those related to national security, the right to access an independent lawyer of their own choosing during the investigation of their charges. Instead, individuals can only select from a roster of pre-approved lawyers chosen by the Head of the Judiciary. The Head of the Judiciary issued a list with only 20 people pre-approved for Tehran province.

“Permitting only lawyers who are pre-approved to defend individuals accused of ‘security’ offences – who often include human rights defenders – completely undermines the right of detainees to a lawyer of their own choosing,” said Philip Luther.

In September 2010, Nasrin Sotoudeh was sentenced to six years in prison on charges of “spreading propaganda against the system” and “gathering and colluding to commit crimes against national security” for her work as a lawyer, including defending countless cases of prisoners of conscience and juvenile offenders sentenced to death. She was released in September 2013 after receiving a pardon.

In 2012, she was awarded the Sakharov Prize for her human rights work. Since her release from prison, she has continued to work as a human rights lawyer, despite attempts by the Iranian authorities to limit her work, including by rejecting many of her requests to represent individuals detained for political reasons.