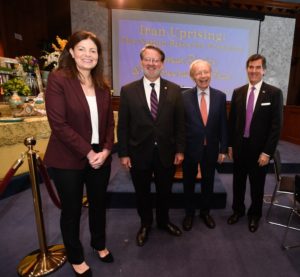 WASHINGTON, DC – On March 12, 2020, Iranian American communities of Maryland and Texas, members of Organization of the Iranian American Communities (OIAC), held a policy briefing in the U.S. Senate. The event examined the Iranian people’s uprising, prospects for change, and U.S. policy implication. The speakers called on the international community to hold Iranian regime accountable for human rights violations, international terrorism, and its failures to openly work with the international community during the current Corona virus outbreak.

In a message to the conference, Mrs. Maryam Rajavi, the president-elect of the National Council of Resistance of Iran, which is the parliament-in-exile, said, “The regime officials concealed the presence of the coronavirus in Iran for several weeks to ensure a turnout in the sham parliamentary election.” She added, “Today, the people of Iran rightly blame the regime for the current situation. Therefore, the objective of the regime and its suppressive forces is to suppress people’s discontent. The regime’s fear and its suppressive measures are due to the fact that Iran is on the verge of change.”

Mrs. Rajavi concluded, “Change in Iran is within reach for a number of reasons: The overwhelming majority of the Iranian people want fundamental change, and have demonstrated this desire repeatedly. The regime fears its downfall because it is engulfed in crises with no way out. The economic situation has worsened. Corruption is widespread. Popular discontent is on the rise. The regime cannot address the most basic needs of the people.”
click to read more 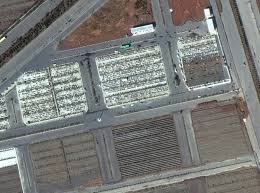 (CNN)Iran has been rapidly expanding a major cemetery in Qom, the area worst hit by the country’s novel coronavirus outbreak, satellite images obtained by CNN reveal.

The country has reported at least 10,075 confirmed coronavirus cases and 429 deaths, the third-highest number of cases after mainland China and Italy.

The satellite images from March 1 and March 8, put out by Maxar Technologies, appear to show an increase in activity inside the Behesht-e Masoumeh cemetery in Qom. The images show what looks like two fresh trenches of graves on March 1, with more excavation after that.

According to Islamic tradition, bodies are supposed to be buried quickly after death. But Behesht-e Masoumeh morgue director Ali Ramezani told Iranian state TV earlier this month that burials were being delayed as testing for the virus takes time. And while corpses are traditionally washed with soap and water before burial in Iran, two medical workers in Qom told CNN that in some cases precautions related to the outbreak are preventing staff from observing traditional Islamic guidelines for burial.

A video from the morgue showed dozens of bodies sheathed in black bags on the floor of an Iranian morgue, while workers in protective suits and masks busily walk among them.

The Persian New Year, or Nowruz, falls next Friday, March 20. Many Iranian families visit cemeteries before the end of the Persian year as part of the annual tradition. Iran’s Supreme Leader Ayatollah Ali Khamenei has called off his annual speech for Nowruz, state news agency IRNA reported Monday. Khamenei will not travel to the city of Mashhad, the site of the Imam Reza shrine, where the speech is usually delivered.
click to read more 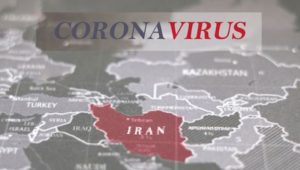 Iran: Over 5,500 Die in 186 Cities Due to Corona Disaster
Repressive mobilization under the pretext of combating Corona to confront youth uprising during the Fire-Fest
NCR-Iran.org, March 16, 2020

The People’s Mojahedin Organization of Iran (PMOI/MEK) announced this afternoon, Monday, March 16, that the number of Coronavirus fatalities exceeds 5,500 in 186 cities.

The number of victims in Bobol and Ilam is more than 250 and 120 respectively. The spread of the virus in Tabriz is alarming and the death toll in East Azerbaijan is at least 150. In addition to other provinces, the death toll in Tehran has soared to 750, in Gilan to 681, in Khorasan Razavi to 457 and in Yazd to 80.
The situation in Mazandaran remains ominous, with at least 70 people losing their lives in the last 24 hours. In the past two days, in Sari, the Provincial capital, 770 people have been hospitalized. The number of physicians, nurses and medical staff, who have lost their lives to Coronavirus is constantly rising. Only in Babol, four of the University of Medical Sciences’ staff have died, the IRGC’s News Agency, Fars, reported.

Kashan is facing a severe shortage of hospital beds with no capacity for new admissions. There is a serious shortage of masks, gloves, protective gowns, and necessary medicines. According to eyewitnesses, on Friday, March 13, no less than 40 people died in Kashan. The government prevents the closure of factories and companies in the Province, which has further spread the virus. Mohammad Haji Jafari, vice-president of Kashan University of Medical Sciences, acknowledged that 65 doctors and medical staff had been infected and the death toll had reached 180.

While even according to regime bogus statistics, the number of victims is increasing every day, Hassan Rouhani, regime’s president, shamelessly claimed today, “The country has gone through the peak period of Coronavirus outbreak.” A couple of weeks ago, he had claimed that by March 7, 2020, “Everything would be back to normal.”
Click to read more 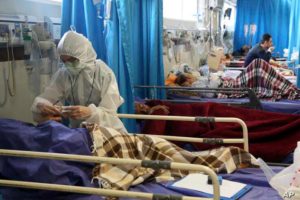 WASHINGTON – Iran’s struggle to contain its coronavirus pandemic could have a ripple effect across the Middle East, with some U.S. officials suggesting it could further destabilize an already volatile region.
In particular, military officials worry that the regime’s slow response has quietly turned Iran into a launching pad for the virus, helping it to spread far beyond what officials in Tehran have been willing to acknowledge.

Making matters worse, U.S. officials believe the extent of the coronavirus’ grip on Iran has been vastly underreported, reaching well into the upper echelons of Iran’s leadership.”A number of people have died as a result of that in Iran’s senior leadership cadre,” McKenzie told reporters Friday.

“People are separated. They’re distrustful,” he added, warning the virus’ toll could make Iran’s leadership more willing to strike out at the U.S. and Western targets in the region, if only as a distraction to the problems at home. Since Iran diagnosed its first case of the coronavirus Feb. 19, it has identified more than 11,000 victims, with officials reporting more than 500 deaths.

World Health Organization officials who recently visited the country, said while Tehran’s efforts are “are evolving in the right direction” there are still some deficiencies and that “more needs to be done.” United Nations officials say they, too, are “deeply concerned” about the pandemic in Iran.
Click to read more 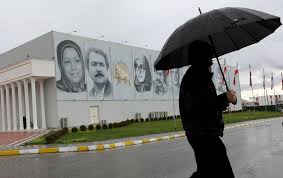 In a gleaming compound built from scratch on an Albanian hillside, thousands of Iranians dedicate their waking hours to toppling the regime in Tehran 3,000 kilometres away. They believe the end of their exile is near.

“I think this year will be very decisive,” says Zohreh Akhiani, the 56-year-old mayor of “Ashraf 3″, a mini-city of some 2,800 exiled Iranians from the opposition movement the People’s Mojahedin Organization of Iran (PMOI). The dissidents hope an onslaught of crises in their homeland will aid their cause, from increasingly harsh US sanctions to recent anti-government protests and the new coronavirus, which has infected top officials.

Even if toppling Tehran is an uphill battle, unrelenting optimism fuels work in the central Albanian compound, the entrance of which is marked by a triumphal arch and metal gates.”Victory is ours! The future is ours,” is inscribed on the arch’s pillars. The PMOI settled in their unlikely home in Albania, a poor Balkan state in southeast Europe, under a UN and US-backed deal in 2013 after their camp in Iraq was bombed.

On farmland outside the capital Tirana, the group has built a sprawling complex with remarkable speed. The undisclosed cost of construction was funded by the diaspora and members themselves, the group says.

Ashraf 3 is a world unto itself, with residential homes, a sports hall, health clinics, shops and a large museum focussed on scenes of alleged Iranian torture tactics. Some hallmarks of normal life are missing however.
Click to read more 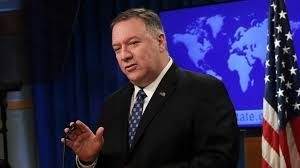 WASHINGTON (Reuters) – U.S. Secretary of State Mike Pompeo warned Iraq’s prime minister that the United States would take measures in self-defense if attacked, according to a statement on Monday after a rocket attack on an Iraqi base that houses U.S. troops helping fight Islamic State.

Pompeo spoke to Prime Minister Adel Abdul Mahdi on Sunday, a day after three American troops and several Iraqi forces were wounded in the second major rocket attack in the past week on an Iraqi base north of Baghdad, U.S. and Iraqi officials said, raising the stakes in an escalating cycle of attacks and reprisals.

He said Iraq’s government should defend the U.S.-led coalition helping it fight Islamic State, according to the statement from State Department spokeswoman Morgan Ortagus.

“Secretary Pompeo underscored that the groups responsible for these attacks must be held accountable. Secretary Pompeo noted that America will not tolerate attacks and threats to American lives and will take additional action as necessary in self-defense,” it said.

Iraq’s Joint Operations Command said 33 Katyusha rockets were launched near a section of the Taji base which houses U.S.-led coalition troops. It said the military found seven rocket launchers and 24 unused rockets in the nearby Abu Izam area.

The Iraqi military said several Iraqi air defense servicemen were critically wounded. Two of the three wounded U.S. troops are seriously injured and are being treated at a military hospital in Baghdad, the Pentagon said. Longstanding antagonism between the United States and Iran has mostly played out on Iraqi soil in recent months.

Iranian-backed paramilitary groups have regularly rocketed and shelled bases in Iraq which host U.S. forces and the area around the U.S. Embassy in Baghdad.
Click to read more 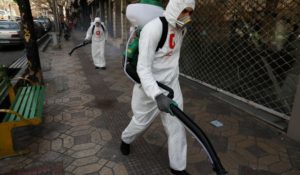 Blog:How Iran’s regime set off a coronavirus bomb on its own economy

The coronavirus has shattered any hope of the Iranian economy clawing out from under two years of deep recession. To the ruling regime’s chagrin, the virus has begun to adversely affect precisely those sectors that seemed poised for growth after weathering the return of US sanctions.

According to the International Monetary Fund, the Iranian economy contracted 4.8 percent in 2018 and 9.5 percent in 2019. The closest thing to good news was that both the IMF and the World Bank forecasted zero growth in 2020. That would be abysmal for most economies, but the Islamist regime in Tehran considered it a ray of light. No more.

By sacrificing public health to politics, the clerical regime turned Iran into a coronavirus bomb exploding across the Middle East. When the epidemic broke out, Tehran failed to cut, limit or even supervise contacts with China. As always, ordinary Iranians have been the main victim of the Islamist regime’s incompetence and psychopathic indifference toward its own citizens.

Beginning in late January, social media reported cases of the virus in Iran, especially in the holy city of Qom. Rather than taking action, the regime issued denials and accused the individuals who reported the problem of “spreading rumors.” The result one month later is an official death toll of 77, likely massively understated, while the country’s deputy health minister admitted to testing positive for coronavirus the day after a news conference at which he sweatily insisted the situation was under control.
Click to read more