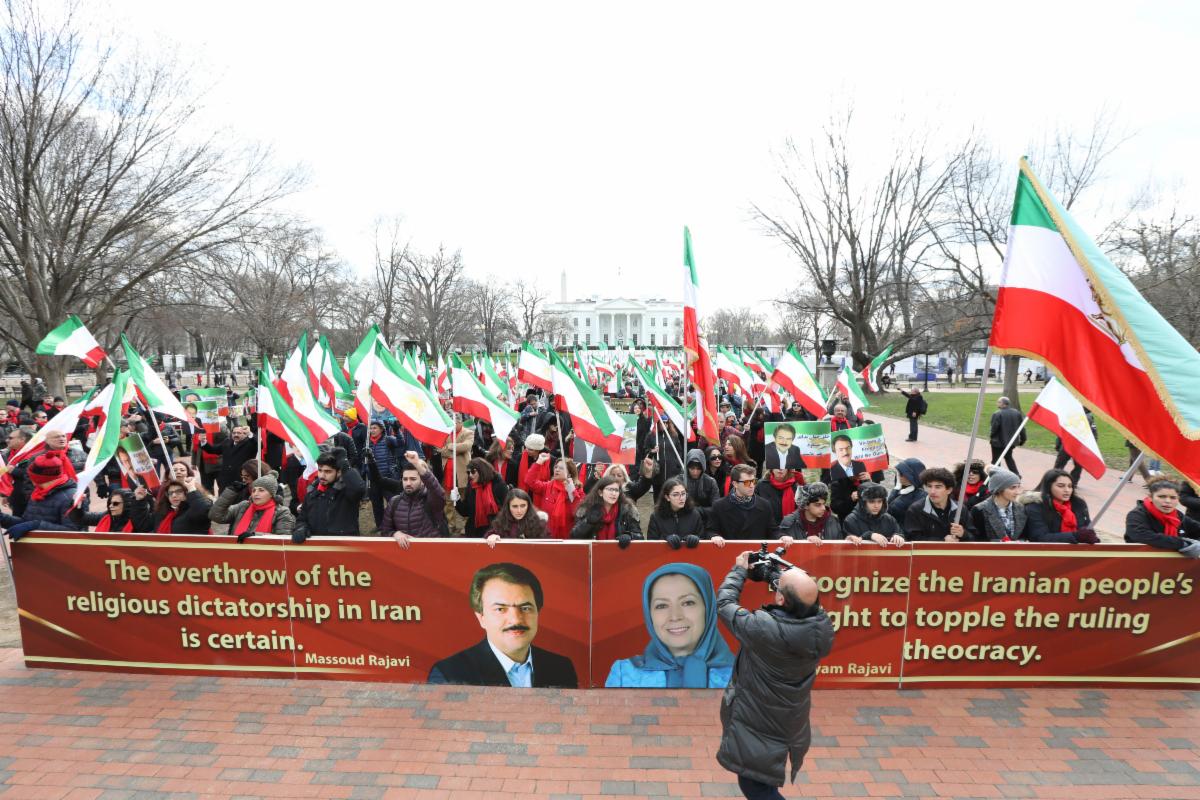 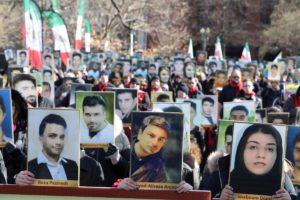 ‘Khamenei and his regime are going down’: Hundreds rally near White House in opposition to Iranian government
Washington Examiner, February 8, 2020

Demonstrators rallied near the White House to raise awareness for dissidents imprisoned in Iran and to highlight the significance of Iranian military commander Qassem Soleimani’s death.

A few hundred people gathered in Lafayette Park in Washington, D.C., at a Saturday event that was organized by those opposed to the government of Iranian leader Ayatollah Ali Khamenei. The demonstration came the month after the United States conducted a drone strike that killed Soleimani.
The demonstrators present showed support for the People’s Mujahedin of Iran, known as the MEK, the most prominent resistance group actively working to overthrow the Islamic Republic.

Retired Col. Wesley Martin, who was the senior anti-terrorism and force protection officer for coalition forces in Iraq, spoke at the event and hailed the importance of Soleimani’s death. He also pointed out the plight of protesters in Iran after hundreds were killed recently.

Standing on a podium adorned with the number 1,500 — representing those killed in recent protests — Martin pointed out the “extreme brutality” exercised by security forces and the Islamic Revolutionary Guard Corps in stifling demonstrations.

“For decades, Soleimani was able to move throughout the Middle East with immunity from accountability. The last thing this leader of a now-declared terrorist organization expected when he arrived in Baghdad airport was a drone strike,” he said to applause from the crowd.

In retaliation for the killing, Iran launched missiles at Iraqi bases housing American troops last month, causing brain injuries for dozens. Following the attack, Iran accidentally shot down a Ukrainian airliner, killing all 176 on board. Initially, the regime lied and said it was a mechanical failure but later admitted to the downing.

“The streets filled once again with Iranian citizens,” the colonel said of the revelation. “Proof has been given to the Iranian people that no one in the regime is invincible, and all can and will be brought to justice. This is a serious blow for an organization that rules with brutality and fear.” 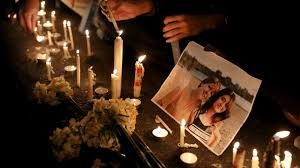 TORONTO (Reuters) – Canadian lawyers, who previously successfully sued Iran, are seeking class action status in a lawsuit on behalf of victims aboard a Ukrainian plane shot down over Tehran last month, looking for at least C$1.5 billion ($1.1 billion) in compensation.

The suit names Iran, its supreme leader, the elite Revolutionary Guards and others as defendants.
Iran admitted its missiles downed the Ukrainian airliner by mistake on Jan. 8, killing all 176 people aboard, including 57 Canadians.

The lead plaintiff in the case is anonymous, preliminarily identified as John Doe, and described as immediate family to a victim identified as Jack Doe.

The filing says John Doe’s identity must be protected because of the risk that “his Iranian family would be put at risk of harm or death by the Iranian regime.” The suit alleges that the downing of the plane was “an intentional and deliberate act of terrorism.”
Iranian authorities did not immediately comment on Friday, when government offices are closed.

Jonah Arnold is co-lead counsel with his father Mark Arnold, who has represented clients in several suits against Iran, including a 2017 appeal decision that led to seizure of some Iranian assets in Canada. 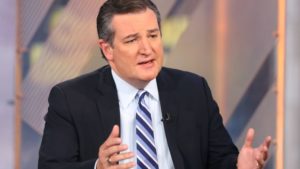 A group of GOP senators wrote to Twitter CEO Jack Dorsey on Thursday that the company would be subject to U.S. sanctions law if it did not end its service for sanctioned Iranian leaders, including Supreme Leader of the Islamic Republic Ayatollah Ali Khamenei and Iranian Foreign Minister Javad Zarif.
“While the First Amendment protects the free speech rights of Americans — and Twitter should not be censoring the political speech of Americans — the Ayatollah enjoys zero protection from the United States Bill of Rights,” Sens. Ted Cruz, R-Texas, Tom Cotton, R-Ark., Marsha Blackburn, R-Tenn., and Marco Rubio, R-Fla., wrote.

“And, as the leader of the world’s leading state sponsor of terrorism — directly responsible for the murder of hundreds of U.S. citizens — the Ayatollah and any American companies providing him assistance are entirely subject to U.S. sanctions laws,” they wrote.

The senators say that an exception for internet-based communications services created by the Obama administration in 2014 would not apply when the person receiving the service has been designated to a special list kept by the Treasury Department, as is the case for Khamenei and Zarif.

The company has generally taken a fairly hands-off approach when it comes to moderating world leaders on its platform. It recently released a policy about how it would handle abusive tweets by world leaders, which would normally be removed when coming from any other Twitter user. The company said that in these cases, it would put a notice on tweets from world leaders that says the content violates its standards. Users will be allowed to click through to view the tweet, a decision Twitter said it made because it believes messages from world leaders are still newsworthy and in the public interest. This feature has not yet been used since the policy was announced in June. 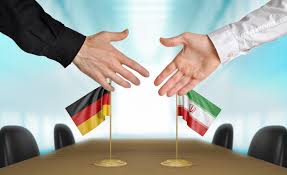 The President of Germany, Frank-Walter Steinmeier, will break his country’s diplomatic tradition and not send a message to his Iranian counterpart to congratulate the anniversary of the Islamic Revolution.

“In light of the current developments in Iran in recent months, there will be no telegram from the Federal President this year,” German daily Die Welt cited a spokeswoman for the Presidential Office as saying on Saturday, February 8, and disclosed the unprecedented decision for the first time.

Apparently, the widespread anti-Islamic Republic uprising last November, the Islamic Revolution Guards Corps (IRGC) missile attacks on two U.S. bases in Iraq, and the downing of Ukraine International Airline’s (UIA)passenger plane on January 8 over Tehran are the reasons behind President Steinmeier’s decision to break the tradition.

Based on data collected by Reuters, the Islamic Republic security forces, supported by the IRGC and armed plainclothesmen, killed up to 1,500 protesters in 29 out of 31 provinces of Iran.

The four-day protests, triggered by a three-fold overnight increase in gasoline prices, soon turned into nationwide rallies against the rulers of the clergy-dominated country. Meanwhile, the downing of UIA’s Boeing 737 killed all 176 onboard.

The presidents of Germany have traditionally congratulated the Islamic Revolution that led to the overthrow of Iran’s pro-west monarch, Shah Mohammad Reza Pahlavi, on February 11, 1979. 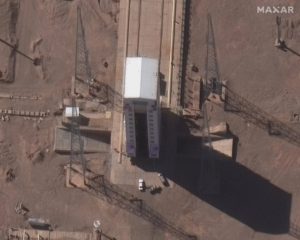 The launch happened at 7:15 p.m. local time at Imam Khomeini Spaceport in Iran’s Semnan province, some 230 kilometers (145 miles) southeast of Iran’s capital, Tehran. A Simorgh, or “Phoenix,” rocket couldn’t put the Zafar 1 communications satellite into orbit, however, due to a low speed, Iranian state TV reported.

“Stage-1 and stage-2 motors of the carrier functioned properly and the satellite was successfully detached from its carrier, but at the end of its path it did not reach the required speed for being put in the orbit,” Defense Ministry space program spokesman Ahmad Hosseini told state TV.

Hosseini still sought to portray the failure as a “remarkable” achievement for its space program. Previous Simorgh launches of the 80-ton satellite carrier suffered other failures.

In the days leading up to the launch, Iranian officials had been promoting the mission, including the country’s Information and Communications Technology Minister Mohammad Javad Azari Jahromi. His quick rise through the Islamic Republic’s carefully managed political system already is generating speculation he could be a candidate for Iran’s 2021 presidential campaign.

Rudy Giuliani: There is one resistance group Iran’s regime fears most, and it is headed by a woman. Episode 9:

The 2020 U.S. Presidential Race and Debates Must Rise Above Politics on Elimination of Qassem Soleimani