The Washington network of Persian-Americans celebrated Nowruz — the Persian New Year — on Wednesday and took the opportunity to discuss human rights and democracy and Iran.
In the Senate and paired with a luncheon of Persian cuisine, the Iranian-American Cultural Association of Missouri and the Organization of Iranian-American Communities sponsored a bipartisan panel of speakers discussing the situation in Iran.

Sen. Charles E. Schumer, D-N.Y., said, “Iranian culture’s beautiful, the country’s a beautiful country.”
He then spoke on the “evil” regime in Iran. “Best case, they’re gone,” the Senate’s No. 3 Democrat said. “Second-best case — that they’re limited in the kind of bad things they can do both inside Iran and outside Iran.” 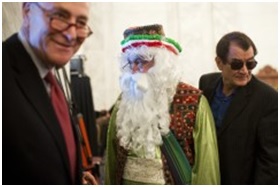 Following Schumer, his colleague on the other side of the aisle, Sen. John McCain, R-Ariz., discussed Camp Liberty in Iraq, where members of the People’s Mujahedin of Iran are housed. The senator said to “keep your fingers crossed” about the former military installation.

“I remained as concerned as you do concerning Iranian behavior,” McCain said. “I promise you one day we will be in a square in Tehran dedicating a statue [to Neda Agha-Soltan],” he said, referring to the protester shot and killed in 2009 during the Iranian elections.