From a Press Availability in Riyadh, Saudi Arabia on the Reelection of Iranian President Rouhani

What we hope – what I would hope – is that Rouhani now has a new term, and that he use that term to begin a process of dismantling Iran’s network of terrorism, dismantling its financing of the terrorist network, dismantling of the manning and the logistics and everything that they provide to these destabilizing forces that exist in this region. That’s what we hope he does. 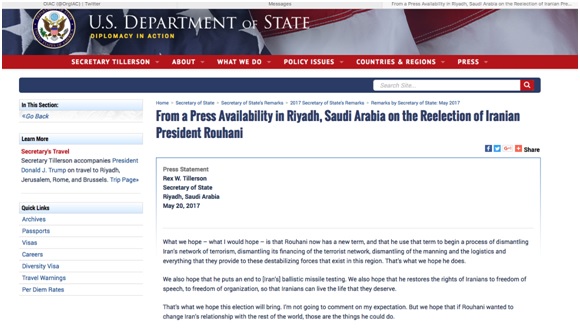 That’s what we hope this election will bring. I’m not going to comment on my expectation. But we hope that if Rouhani wanted to change Iran’s relationship with the rest of the world, those are the things he could do. 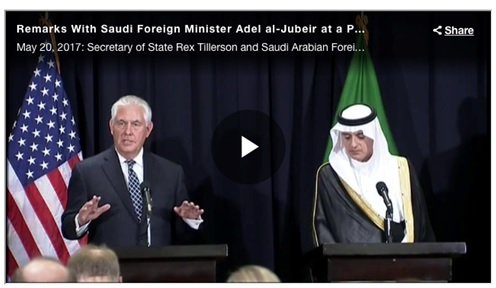 (RIYADH, Saudi Arabia) — Secretary of State Rex Tillerson called upon Iran’s president to end all support and financing of terrorist groups now that he has won re-election.

He also expressed his hope that Iran puts an end to its ballistic missile testing and “restores the rights of Iranians to freedom of speech, to freedom of organization so Iranians can live the life they deserve.”

He would not comment on his expectation for the outcome of Friday’s election in Iran, only saying that “if Rouhani wanted to change Iran’s relationship with the rest of the world those are the things he could do.”

Tillerson was speaking at a joint press conference with his Saudi counterpart, Foreign Minister Adel al-Jubeir.

Riyadh, Saudi Arabia (CNN)-US President Donald Trump on Sunday delivered a speech to the leaders of more than 50 Muslim countries to outline his vision for US-Muslim relations.

Here is a complete transcript of his remarks. Addressing Iran.

………But no discussion of stamping out this threat would be complete without mentioning the government that gives terrorists all three—safe harbor, financial backing, and the social standing needed for recruitment. It is a regime that is responsible for so much instability in the region. I am speaking of course of Iran.

From Lebanon to Iraq to Yemen, Iran funds, arms, and trains terrorists, militias, and other extremist groups that spread destruction and chaos across the region. For decades, Iran has fueled the fires of sectarian conflict and terror.

It is a government that speaks openly of mass murder, vowing the destruction of Israel, death to America, and ruin for many leaders and nations in this room.

Among Iran’s most tragic and destabilizing interventions have been in Syria. Bolstered by Iran, Assad has committed unspeakable crimes, and the United States has taken firm action in response to the use of banned chemical weapons by the Assad Regime — launching 59 tomahawk missiles at the Syrian air base from where that murderous attack originated.

Responsible nations must work together to end the humanitarian crisis in Syria, eradicate ISIS, and restore stability to the region. The Iranian regime’s longest-suffering victims are its own people. Iran has a rich history and culture, but the people of Iran have endured hardship and despair under their leaders’ reckless pursuit of conflict and terror.

Until the Iranian regime is willing to be a partner for peace, all nations of conscience must work together to isolate Iran, deny it funding for terrorism, and pray for the day when the Iranian people have the just and righteous government they deserve…..