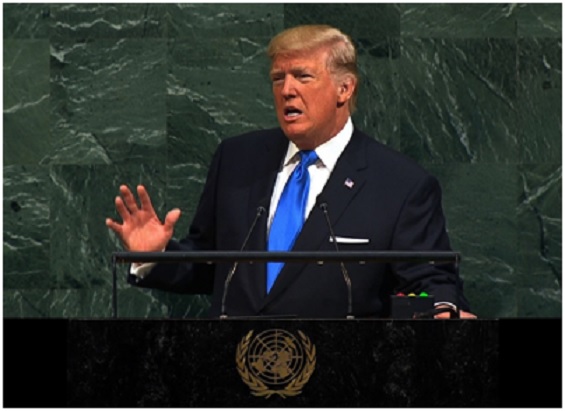 This Islamic Republic of Iran is mired in crises, few of which stem from US President Donald Trump’s withdrawal from the 2015 nuclear deal and the subsequent renewed economic sanctions. Those actions only serve to help the US, and hopefully the international community as a whole, in putting pressure on Iran’s clerical regime at a time when it is most vulnerable and least likely to conceal the misdeeds that make such pressure necessary.

Iran’s national currency, the Rial, plumbed new depths this month, trading at more than 150,000 to the US dollar. The new figures provoked further economic protests in various Iranian cities, in what has become the status quo in recent months. The Iranian people view the economic catastrophe as part of the broader failings of the Iranian government, and many of the protests have accordingly taken on an unequivocal message of opposition to the regime in its entirety.

Activists have chanted “death to the dictator” and “death to Rouhani,” in reference to the country’s supreme leader and its president. Others have doubled down on the condemnation of both political factions of the clerical regime, while also rejecting the regime’s attempts to dismiss the unrest as the product of some foreign conspiracy. “The enemy is here,” protesters declared, according to independent Iranian news outlets and witnesses on social media. “They are lying when they say it is America.”

We can do this by focusing international attention on the human rights abuses with which the Iranian regime responds to any and all popular threats to its hold on power. We can also weaken the regime’s repressive infrastructure by building a broader consensus for economic sanctions and diplomatic isolation that will ultimately force the mullahs to respond to the crises they are presently trying to suppress.

A combination of internal and external pressure could finally bring the Iranian regime to heel, thereby ushering in both democracy at home and security abroad.

The worsening economic and social conditions, along with the popular response to them, amplify the inherent potential of assertive Western policies.

Clearly, the Trump administration’s decision to convene the UN Security Council to discuss Iran-related issues on Sept. 26 comes at an auspicious time, providing an opportunity to condemn the latest arrests and human rights violations involving peaceful protesters, and to underscore the ineffectiveness of those measures. The 2018 Iran Uprising Summit planned in advance of that meeting will echo this message.

Recent examples are numerous and come as no surprise to Western observers, after several American and European nationals were caught up in the regime’s efforts to suppress all manner of perceived threats to its hard-line Islamist identity.

Visitors to the Islamic Republic are not the only Westerners at risk from the regime’s desperate bid to resolve its domestic crises through violence. The acknowledged role of the MEK in the uprising has prompted Tehran to target the popular democratic resistance group outside of Iran. Fortunately, all serious attacks have been thwarted so far, but had they managed to slip past European security services, terrible damage was plotted in March against the MEK community in Albania. On June 30, targets included hundreds of American and European dignitaries attending an international rally outside Paris organized by adherents of the National Council of Resistance of Iran (NCRI) and its president-elect, Maryam Rajavi.

The unraveling of the latter attack led to the arrest of Assadollah Assadi, a high-level diplomat at the Iranian embassy in Vienna, who masterminded the plot hatched at the highest levels in Tehran. His arrest exposed a terrorist operative hidden at the heart of Europe, and that Tehran’s anxiety at the domestic unrest and the MEK’s advances outweighs all other considerations, including relations with the EU.

A continuation of rights abuses in Iran means a perpetuation of terror threats abroad, while preventing Tehran from further abuses in one of these areas will ultimately make the regime’s entire project of self-preservation unsustainable.

The recent terror attempts should make it apparent to both sides of the Atlantic that Western interests and the Iranian people’s interests are one and the same. A combination of internal and external pressure could finally bring that regime to heel, thereby ushering in both democracy in Iran and security abroad. This is a message that should be emphasized at the Security Council this month.

𝐁𝐢𝐩𝐚𝐫𝐭𝐢𝐬𝐚𝐧 𝐇𝐨𝐮𝐬𝐞 Briefing 𝐔𝐫𝐠𝐞𝐬 𝐭𝐡𝐞 𝐔.𝐒. 𝐓𝐨 𝐜𝐨𝐧𝐝𝐞𝐦𝐧 𝐈𝐫𝐚𝐧 𝐑𝐞𝐠𝐢𝐦𝐞’𝐬Bipartisan House Resolution Urges the U.S. To condemn Iran Regime’s State Sponsored Terrorism, Rights Abuses,Welcomes Belgian Court’s Verdict;𝐒𝐮𝐩𝐩𝐨𝐫𝐭𝐬 𝐭𝐡𝐞 𝐏𝐞𝐨𝐩𝐥𝐞’𝐬 𝐔𝐩𝐫𝐢𝐬𝐢𝐧𝐠, 𝐀 𝐅𝐫𝐞𝐞 𝐈𝐫𝐚𝐧Wednesday, March 3, 2021 (NEW DATE)𝟏𝟏:𝟎𝟎 𝐀𝐌 – 𝟏𝟐:𝟑𝟎 𝐏𝐌 (𝐄𝐒𝐓)Introduced on February 11, 2021, One-Hundred-Twelve bipartisan members of U.S. House of Representatives joined their voices as original cosponsors of H.Res.118, “Expressing support for the Iranian people’s desire for a democratic, secular, and nonnuclear Republic of Iran and condemning violations of human rights and state-sponsored terrorism by the Iranian Government.” The Resolution cites regime’s brutal crackdowns on dissidents and addresses regime’s abuse of diplomatic privileges in order to advance its terrorist operations in support of its malign domestic and foreign policy. House Resolution 118 is led by Congressman Tom McClintock (R-CA) and Congressman Brad Sherman (D-CA).On February 4, 2021, a court in Belgium convicted and sentenced an Iranian diplomat to 20 years imprisonment for conducting years of intelligence operations across Europe, recruiting and establishing a network of terror agents in multiple countries and conspiring to commit mass murder.Assadi and his three accomplices were arrested in June 2018 while in possession of explosives they had planned to detonate at the Free Iran gathering, aiming to terror NCRI President-elect, Mrs. Maryam Rajavi. Court documents showed that the plot was planned and approved by Iranian regime leadership, including Supreme Leader Ali Khamenei and President Hassan Rouhani. The event was attended by thousands of Iranian Americans as well as former government officials from dozens of countries and from all continents.This terrorist diplomats’ actions highlight what Iranian Americans have said for years: That the Iranian regime’s terrorist networks and activities are intertwined with its desire to stop uprising within Iran, as well as its perverse diplomatic and political adventures. These networks have unfortunately been developed over decades under the cover of diplomacy or dialogue. Dismantling them will require coming face to face with Iran’s global diplomatic infrastructure.The bill also highlights Iranian regime’s, arbitrary and brutal suppression of journalists and “ethnic minorities, including Iranian Kurds, Baluchis, and Arabs, as well as religious minorities such as Christians, Jews, Baha’is, Zoroastrians, and even Sunni Muslims.” The measures cites H.R.4744 and H.Res.752, as well as Amnesty International reports calling on the United States to, ‘‘condemn Iranian human rights abuses against dissidents, including the massacre in 1988 and the suppression of political demonstrations” in 1999, 2009, 2017, 2018, as well as the use of live ammunition to kill over 1500 people during the November 2019 nationwide protests in Iran.OIAC concurs with the sense of U.S. Congress and the U.N., calling on the international community to investigate these, “cases through the establishment of an international investigation,” and urging the United States to “be involved in any establishment of an international investigation into the 1988 extrajudicial killings of Iranian dissidents.”Organization of Iranian American Communities applauds bipartisan members of Congress for recognizing and acting on the this hidden threat. Specifically in the 117th Congress, we point to House Resolution H.Res 118 and the leadership demonstrated by its sponsor & original bipartisan cosponsors who have condemned Iranian state-sponsored terrorism and explicitly demand accountability for the so-called diplomats and officials involved in persecution of political opponents at home and multiple terror plots in Europe, including the 2018 Free Iran gathering.On Wednesday, March 3, 2021, Organization of Iranian American Communities, in association with its members organizations in 41 states, will host a virtual meeting from 11am to 12:30 pm to recognize these Congressional leaders and raise public awareness about Iranian regime’s malign role in and outside Iran.We invite you to join us. ... See MoreSee Less