Why has the United States ignored the massacre in Camp Ashraf? 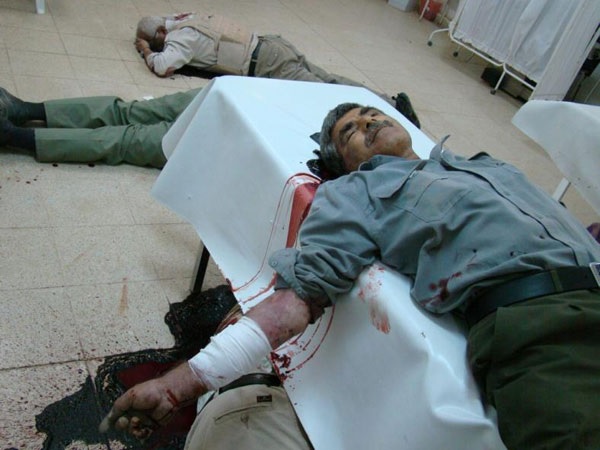 The situation surrounding a group of Iranian dissidents in Iraq has reached a dire phase. On September 1, 52 Iranian dissidents were killed with shocking brutality in Camp Ashraf in the Diyala province of Iraq. Disturbing images have emerged from the camp which show handcuffed individuals shot execution style, as well as multiple bodies shot to death in the camps medical clinic. Camp Ashraf has been a haven for the Iranian opposition organization the People’s Mojahedin of Iran (PMOI/MEK) for nearly three decades, and has become a symbol of resistance to the regime in Iran. Some 3,100 Iranian dissidents were recently moved out of Ashraf and relocated to a new facility called “Camp Liberty” near the Baghdad airport. This attack is just the latest incident since the Iraqi army took over control of the Camp from the U.S. in 2009. Many questions remain as to what exactly happened in on September 1, including the fate of seven members of Camp Ashraf who were abducted and face the threat of being sent back to Iran. This massacre is just one more indication that the U.S. breached its obligations under international law in respect to the residents of Camp Ashraf. Background (For an in-depth background on the PMOI in Iraq, read this piece by former Attorney General Michael Mukasey and former FBI Director Louis Freeh.) Following the 2003 invasion of Iraq, American forces entered Ashraf and signed a ceasefire agreement with the residents, giving them Protected Person status under the 4th Geneva Convention in exchange for handing over their means of protection. The designation implied a responsibility on behalf of the U.S. to ensure the safety and security of these individuals, which was upheld for six years. Following the withdrawal from Iraq, the U.S. transferred the residents into the custody of the Iraqi army. This transfer has proven disastrous, as the Iraqi army has launched several deadly raids between 2009 and 2011, killing more than 49 residents. A cursory review of customary international law leads to some disturbing conclusions regarding the United States’ role in what amounts to crimes against humanity. Duty to Protect The transfer of Ashraf into Iraqi control may have been illegal under international law. The U.S. has claimed that the Protected Person status ended in 2009. However, the U.S. continued to occupy Iraq to some capacity until 2011, and actually maintained a monitoring presence in the Camp during two deadly raids by the Iraqi army in 2009 and 2011. These factors make it unclear as to when the status actually ended, and whether the U.S. had a duty to ensure that the residents were transferred to a responsible party who would not persecute them. Article 45 of the 4th Geneva Convention explicitly states that if transferred individuals are mistreated, “ …the Power by which the protected persons were transferred shall, upon being so notified by the Protecting Power, take effective measures to correct the situation or shall request the return of the protected persons. Such request must be complied with.” This article provides clear authority for the United States to reassert protection over the residents of Camp Ashraf, particularly after the deadly raids carried out by the Iraqi army. Article 45 also notes that, “In no circumstances shall a protected person be transferred to a country where he or she may have reason to fear persecution for his or her political opinions or religious beliefs.” The fact that Ashraf residents have been targeted for their political beliefs has been demonstrated beyond doubt. This transfer could also be a violation of the Article 3 of the UN Convention against Torture, which prohibits the transfer of individuals to a situation: “where there are substantial grounds for believing that he would be in danger of being subjected to torture,” as well as the as well as the principle of non-refoulement. Many have argued that the Nouri al-Maliki regime’s close ties with Iran, coupled with the explicit approval that Iran has expressed over the killing of Ashraf residents is evidence that the Iraqi government is in fact acting as a proxy of Iran in its persecution of the residents. There is also ample evidence demonstrating that the U.S. knew just how volatile the situation could become. A WikiLeaks cable identified by the Bureau of Investigative Journalism at City University in London shows the US was aware that the Iraqi government planned to crack down on Ashraf, with potentially grave humanitarian consequences. The fact that the attack on Ashraf was expected, coupled with a preexisting duty of protection should be more than enough to constitute a prima facie breach of international humanitarian laws by the U.S. Future Obligations The future of those in Camp Liberty remains unclear. Residents have expressed concerns about the security risks in the Camp, particularly after 10 residents were killed in multiple rocket attacks in February and June. The UN Working Group on Arbitrary Detention, which examined the complaints made by Liberty residents, described the condition of Liberty as “prison-like”. The residents of Camp Liberty are not typical refugees in the traditional sense. Though they have been designated as asylum seekers by UNHCR, and meet the criteria for political refugees based on the demonstrated past persecution of members in Iran, their status as a resistance organization only strengthens their need for special protection. The U.S. and the international community have the responsibility to protect (R2P) the refugees in Liberty, particularly after the horrific events of September 1.  R2P provides a framework for international action in unique circumstances, in this case a small contingent of Blue Helmets and UN monitors can be utilized effectively. The tragic reality of international humanitarian law is the gap between theory and action. Understanding these issues is one thing, and implementing real results in a complex political arena is something else entirely. The U.S. has so far neglected its obligations to members of the PMOI. For these refugees caught in dire circumstances, broken promises and breached conventions are not hypothetical questions on a law school exam, but a matter of life and death.