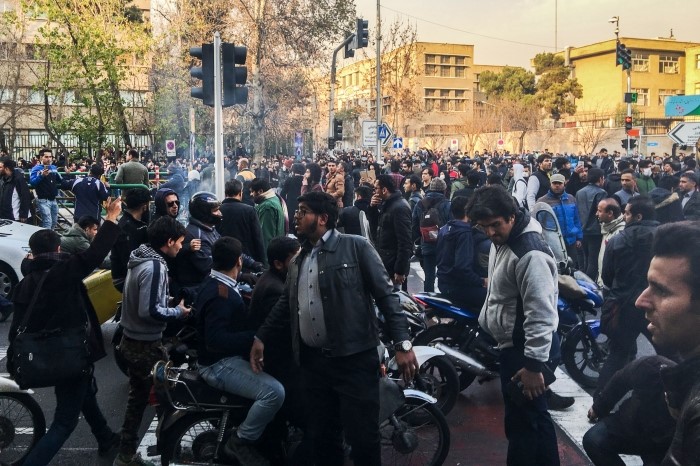 Iran’s rulers have inflicted death by torture and gunfire on citizen protesters in a crackdown since the Dec. 28 street uprising erupted, the main opposition group said Tuesday.

The Europe-based National Council of Resistance of Iran says the Islamic republic’s ubiquitous security apparatus has arrested more than 8,000 citizens and killed at least 50, all while the West has remained mostly silent. The council attributes at least five deaths to torture.

President Trump has spoken out in support of the protesters. The Treasury Department on Friday slapped further sanctions on the regime’s judiciary chief, Sadeq Amoli Larijani. Mr. Larijani has been singled out by the West for years for endorsing cruel punishments that include torture and amputation.

“As the head of the judiciary for the past nine years, Larijani is a key official in the regime’s suppressive apparatus, who has played a direct role in the execution of thousands of people, in the crackdown and arrest of dissidents, as well as in censorship and repression,” said Shahin Gobadi, a council spokesman based in Paris.

The opposition group said protests have spread to 130 cities. The protesters complain of dismal economic conditions, of military adventures in Iraq and Syria, and of being ruled by clerical Shiite Muslim hard-liners led by Ayatollah Ali Khamenei.

The council on Tuesday released a list of five resisters who it said were tortured to death by the Islamic Revolutionary Guard Corps and its various security units.

The council identified one deceased protester as Kianoush Zandi, a graduate of the University of Sanandaj in the city west of Tehran near the Iraq border. He disappeared on Jan. 4. His body was returned to the family Sunday by Sanandaj intelligence.

The council said the family and citizens of Sanandaj commemorated Mr. Zandi at the Farajeh-Shahr mosque, defying threats from security forces.

The body of another youth, Mohammed Nassiri, was returned to his family with a statement that he had committed suicide.

“The shroud of secrecy and lack of transparency over what happened to these detainees is alarming. Instead of rushing to the judgment that they committed suicide, the authorities must immediately launch an independent, impartial and transparent investigation, including independent autopsies,” said Magdalena Mughrabi, Amnesty International’s deputy director for the Middle East and North Africa.

“The international community, including the United States, must refer the dossier on the atrocities of the ruling religious dictatorship,” said Mr. Gobadi, the council spokesman. “Moreover, the regime oil exports must be subjected to sanctions and Tehran must be denied access to the international financial system.”

Amnesty International reported that “more than a thousand people have been arrested and detained in jails notorious for torture and other ill-treatment over the past seven days, with many being denied access to their families and lawyers.”

The group singled out Tehran’s notorious Evin prison, which took in more than 400 protesters on Dec. 31 and Jan. 1. The ruling mullahs use Evin as a collection point for political prisoners, some of whom are executed on the spot.

Jim Phillips, a Middle East analyst at The Heritage Foundation, said U.S. allies’ muted response stems from their desire to maintain the 2015 Iran nuclear deal struck by the Obama administration and its trade benefits.

Mr. Trump repeatedly has labeled the agreement an awful deal that has allowed Iran to increase its ballistic missile testing and support for terrorism.

“While President Trump has been very vocal on the plight of Iranian protesters, many other Western leaders have turned a blind eye to the protests, fearful of alienating an Iranian regime that they hope to appease,” Mr. Phillips said. “Many European and Asian allies seek to preserve the nuclear deal with Iran in order to maintain a business-as-usual relationship with the Islamist dictatorship in Tehran. They are fearful that if they admit that the regime represses its own people, then they will be asked to do something about it that could diminish trade with Iran.”

In his statement on Jan. 12 advocating changes to the Joint Comprehensive Plan of Action, Mr. Trump said: “We are also supporting the brave Iranian citizens who are demanding change from a corrupt regime that wastes the Iranian people’s money on weapons systems at home and terrorism abroad. And crucially, we are calling on all nations to lend similar support to the Iranian people, who are suffering under a regime that is stifling basic freedoms and denying its citizens the opportunity to build better lives for their families — an opportunity that is every human being’s God-given right.”

Iran is capitalizing on strife-filled wars in Iraq and Syria to establish a large zone of Middle East dominance that stretches from Tehran, through northern Iraq to Damascus, where it deployed thousands of militia, to Lebanon, where it finances the terrorist group Hezbollah.

Iran played a major role in the brutal suppression of rebels in the Syrian city of Aleppo. It also is building weapons compounds and bases inside Syria to bolster President Bashar Assad’s post-civil-war rule.

“The regime, the Revolutionary Guards and its paramilitary proxies must be expelled from Syria, Iraq, Yemen and other countries in the region,” Mr. Gobadi said.

The Heritage Foundation’s Mr. Phillips said that what makes the current unrest significant is that, unlike the Tehran-centric election protests of 2009, this uprising started in smaller cities with working-class populations.

“The fact that the protests originated in these areas is a sign that the regime’s narrow base of political support has been increasingly eroded by its poor economic performance and continued repression,” he said.