On September 24, 2019, thousands from across the United States attended a major rally across from the United Nations to support the Iranian people’s movement for regime change. The rally called on the international community for firmness toward the oppressive and terror-sponsoring theocracy ruling Iran, as the 74th annual session of the UNGA began its work.

Former New York Mayor Rudy Giuliani addressed the gathering and passionately defended the Iranian people’s resistance for democratic regime change in Iran.  “I am for regime change,” he said adding, “Down with the tyrants in Iran. Down with the ayatollah and the mullahs and all the crooks.”  Mr. Giuliani told the crowd that the National Council of Resistance of Iran (NCRI) “can take over and run Iran like no other regime change models.” Iran would thus be able to go, “From Regime of terror to regime of democracy & freedom under leadership of Madam Rajavi.

Also addressing the rally was former Senator Joe Lieberman who called on the international community to embrace a policy of regime change by helping to empower the people of Iran and their organized resistance.  “Regime’s aggressions still continues,” Senator Lieberman said and warned, “Our policies won’t change their behavior. It’s Regime Change that can stop the bloodshed.”

Former U.S. Senator Robert Torricelli called on the international community to unite in addressing the Iranian threat.  Urging the crowd to help the people of Iran, he said, “We will change the regime and bring freedom to Iranians.”

In a message, Madam Maryam Rajavi, the President Elect of the National Council of Resistance of Iran (NCRI) called on the international community, “to recognize the right of the Iranian people’s resistance to overthrow the religious fascism and achieve freedom.” She called the crowd, “The voice of the Resistance Units and Councils of Resistance who through their courageous activities across Iran have kept the flames of uprising and protests alive.” 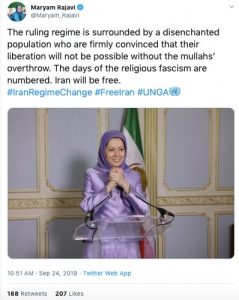 The UN Security Council, Mrs. Rajavi said, “must declare the clerical regime a threat to global peace and security. And, the dossier of the regime’s human rights violations, particularly the massacre of 30,000 political prisoners in 1988, must be referred to an international tribunal.”

Mrs. Rajavi reminded the international community that, “the days of the religious fascism are numbered.” “Iran will be free,” she said.

Rally Against Rouhani in New York