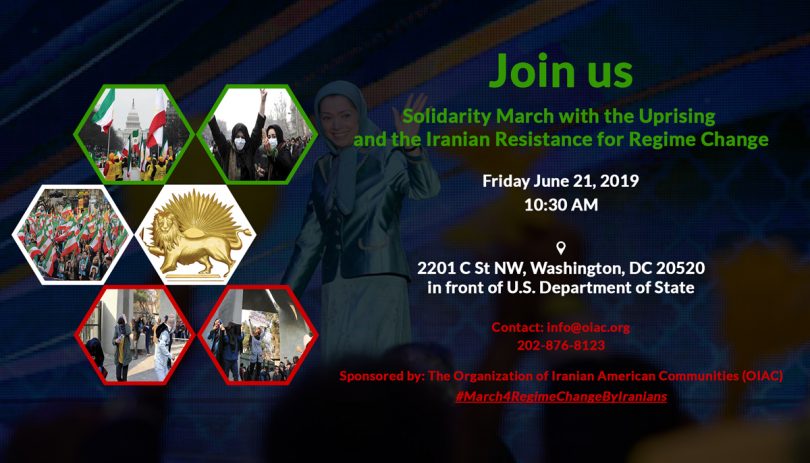 Keynote Speakers Will Address the Rally

WASHINGTON, DC, June 19 – On Friday, June 21st, several thousand Iranians – many from the greater DC area – will hold a rally across from the State Department and march to the White House. They will urge recognition of the Iranian people’s right for regime change, support Maryam Rajavi’s Ten-point Plan for the future of Iran, and call for firm policy on Iran.

Mrs. Rajavi, the President-elect of the National Council of Resistance of Iran (NCRI), will address the rally via video from Europe.

Members of Congress have also been invited to address the rally.

The rally will stress that the religious dictatorship is neither willing nor capable of changing its behavior and that it must be ousted to ensure respect for human rights in Iran and peace and stability in the Middle East region.

Rally is in solidarity with Iran’s anti-regime protests in 160 cities since last year.

The Organization of Iranian-American Communities is an all-volunteer, non-partisan and non-profit organization which represents the network of Iranian-American organizations in 40 states. OIAC advocates for a democratic, secular and non-nuclear republic and therefore supports the 10-point Plan of Mrs. Maryam Rajavi, the President-elect of the democratic coalition National Council of Resistance of Iran. OIAC does not support a foreign war to bring about change in Iran, nor does it support an appeasement policy to the detriment of people of Iran.