TERROR ATTACK FOILED:
Plot to Bomb Iran rally halted after car with Explosives found
An Iranian diplomat is among three people arrested over an alleged terror threat after a plot to bomb a Free Iran rally in Paris was discovered by Belgian authorities.

Three terror plot suspects were arrested in France and Germany this weekend over an alleged terror attack plot to bomb a rally organized by the National Council of Resistance of Iran in Paris on Saturday.

Two suspects in Belgium were intercepted by police on Saturday and were found with 500 grams of TATP, a home-made explosive produced of easily available chemicals.

The pair, believed to be from Antwerp, were also found with a detonation device in their car, Belgian prosecutors and the intelligence services said.

The 38-year-old man and a 33-year-old woman, identified only as Amir S and Nasimeh N, were charged with attempted terrorist murder and preparation of a terrorist act, it said.

A diplomat at the Iranian embassy in the Austrian capital Vienna was also arrested in Germany on Saturday.

Staff at the embassy in Vienna said the ambassador was not immediately available for comment but an NCRI official claimed the man arrested in Germany had been station chief of the Ministry of Intelligence and Security (MOIS) in Vienna since 2014.

The Belgian statement gave no further details about diplomat, other than saying they were suspected of having been in contact with the Belgian pair arrested.

Legal sources also suggest a further three people were also detained in France over the terror plot during the Iranian conference.

US President Donald Trump’s lawyer Rudy Giuliani and several former European and Arab ministers were among those attending the meeting of the Paris-based NCRI on Saturday. 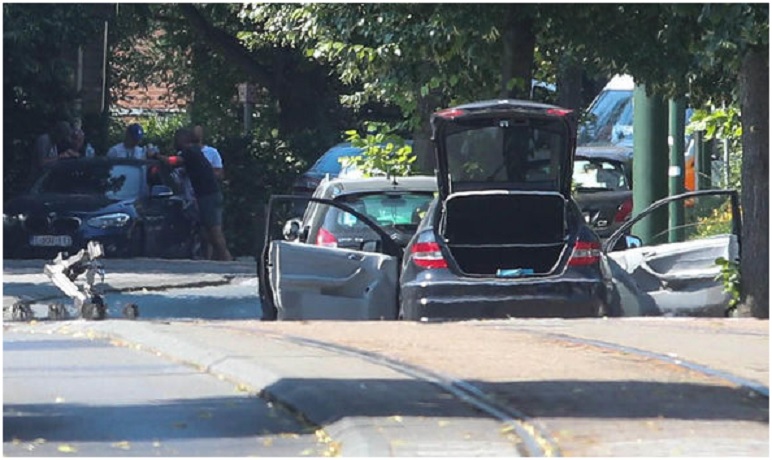 Mr. Giuliani used a fiery speech to tell the crowds that US President Donald Trump and his sanctions will help end the “murderous regime” in Iran.

While Newt Gingrich, the former House Speaker and a close ally of Trump’s, added that Europe must also impose tough restrictions on Iran – or face the wrath of his president.

After hearing of the shocking terrorist plot today, Rudy Giuliani said: “All the participants at the Free Iran 2018 – The Alternative rally in Paris on June 30, appreciate and admire the fine work of law enforcement particularly in Belgium and France in arresting the terrorists who according to the Belgian Federal Prosecutor’s office were planning an attack on the gathering supporting freedom from the theocratic oppressive regime in Iran.

“This accentuates the growing sense that the regime that is the biggest sponsor of terrorism in the world is increasingly weakened by constant large demonstrations in over 140 cities.

“It is also becoming apparent that Madam Maryam Rajavi and the NCRI pose a realistic alternative to this homicidal regime.

“Nothing could be worse for these misogynists than a movement seen as replacing them headed by a heroic woman.” 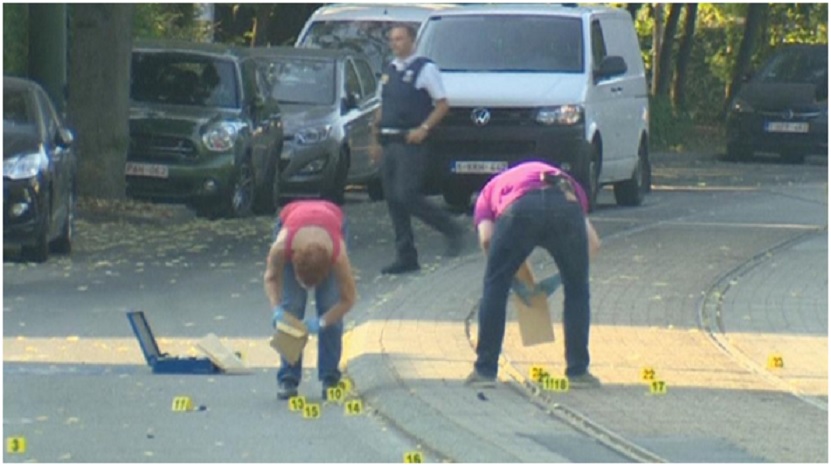 huge meeting, which attracted a crowd of thousands to see NCRI President Maryam Rajavi, took place on Saturday in Villepinte, just outside of Paris and a three-hour drive from Brussels.

Shahin Gobadi, a spokesperson from the NCRI, said: “A plot by the religious dictatorship ruling Iran to carry out a terrorist attack against the grand gathering of the Iranian Resistance in Villepinte was foiled.

The Iranian regime’s embassies and representative offices in Europe are centers of espionage and terrorism, and the Iranian Resistance once again reiterates the need to shut them down.

“The clerical regime’s terrorists in Belgium, with the assistance of the regime’s diplomats, had plotted this attack. A man and woman who were implicated in the plot were arrested by the Belgian authorities.

“The woman had come to Belgium from Iran in 2009. A diplomat of the Iranian regime who was implicated was also arrested in Germany.

“The Iranian Resistance has warned time and again against terror plots and preparations by so-called “diplomats” of the Iranian regime and by the agents of the Ministry of Intelligence and the IRGC Qods Force in various European countries.

“The Iranian regime’s embassies and representative offices in Europe are centers of espionage and terrorism, and the Iranian Resistance once again reiterates the need to shut them down.”

Coachloads of activists attending the festival-like event had arrived from across Europe for the annual gathering.

Security at the venue was exceptionally tight, with individuals and bags searched at the entrance to the conference center.

The NCRI is an umbrella bloc of opposition groups in exile that seek an end to Shi’ite Muslim clerical rule in Iran. 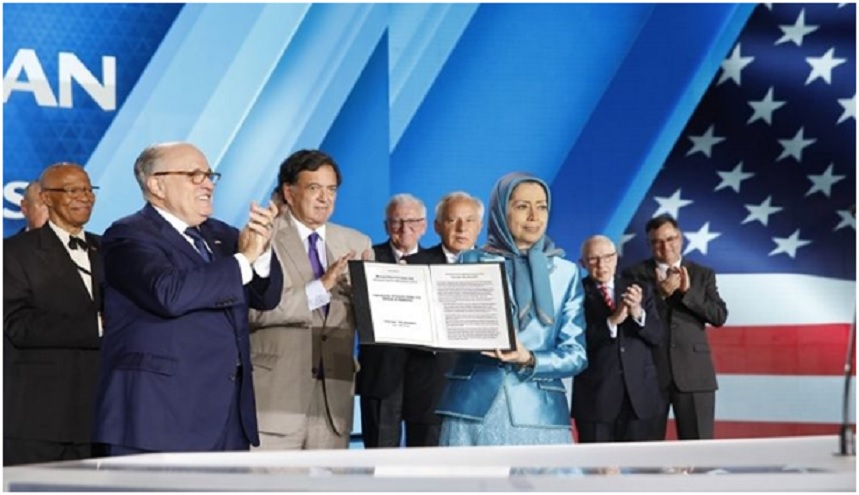 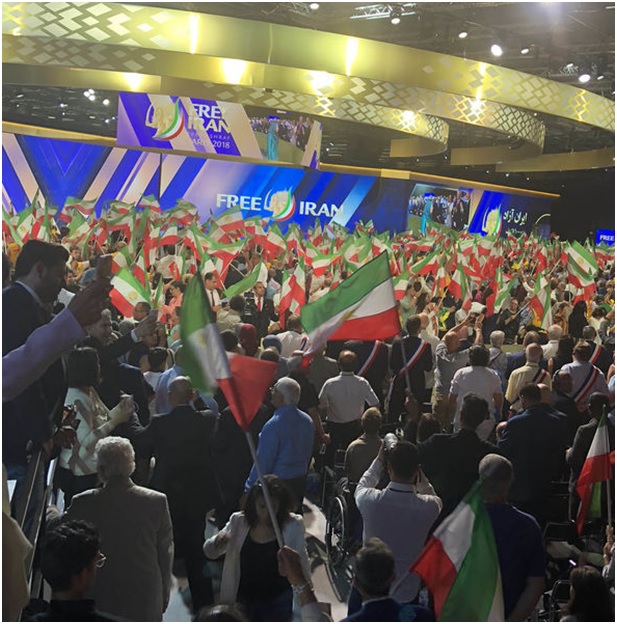 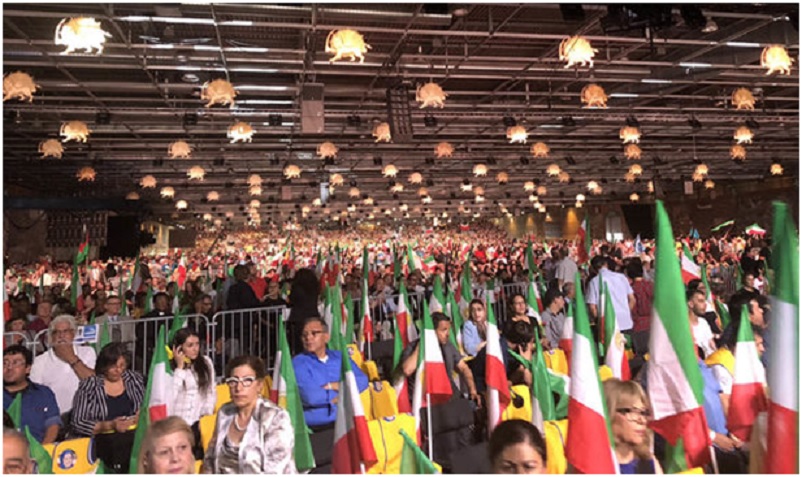 Tehran has long called for a crackdown on the NCRI in Paris, Riyadh, and Washington.

Iranian President Hassan Rouhani is due to visit Austria on Wednesday. He is believed to have left for Europe this morning.

Reacting to the shock arrests, Iranian Foreign Minister Mohammad Javad Zarif announced Tehran was ready to cooperate to uncover what he called a “false-flag ploy”.

He said on Twitter: “Iran unequivocally condemns all violence & terror anywhere, and is ready to work with all concerned to uncover what is a sinister false flag ploy.”

The Iranian top diplomat went on pointing that the alleged terror plot and the following arrest look “convenient”.

“How convenient: Just as we embark on a presidential visit to Europe, an alleged Iranian operation and its “plotters” arrested,” he tweeted.

Following the arrests, Belgian authorities also conducted five raids in different parts of the country but did not elaborate on whether anything was found.

“Once more the good cooperation between countries has borne fruit,” Michel wrote.

Everything You Need to Know about US Sanctions on Iran

Despite nuclear talks, Iran is still far from moderation | Opinion

While some American policymakers are eager to take the proceedings in Vienna as a sign of the new administration's cooperative tendencies, most know better.
View on Facebook
· Share

In this week's Brief on Iran, we highlight ongoing protests in Iran, activities and articles on Iranian resistance, and more.#IranProtestsconta.cc/3p3wsD4 ... See MoreSee Less