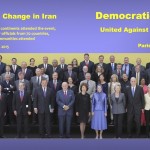 13, 2015, tens of thousands gathered outside Paris, France to participate at a conference against Islamic Fundamentalism co-sponsored by Organization of Iranian-American Communities (OIAC-US).  Iranian-American community leaders joined over 600 dignitaries thousands of participants from 5 continents to express solidarity with the Iranian people and call for worldwide solidarity against Iranian government inspired Islamic extremism.

The following is a few segments, documents, and related texts documented before, during, and after the conference for your review:

Note: The following is the text of Madam Maryam Rajavi’s keynote remarks as reflected in the Congressional Record:

SPEECH OF MARYAM RAJAVI, THE ELECTED PRESIDENT OF THE NATIONAL COUNCIL OF RESISTANCE OF IRAN (NCR) IN 2015 PARIS GRAND GATHERING OF THE IRANIAN RESISTANCE

IN THE HOUSE OF REPRESENTATIVES

OIAC Members Hold Rallies Across the U.S. to Condemn Acid Attacks Against Women In Iran

Thousands of Iranian Refugees may be Deported Back...