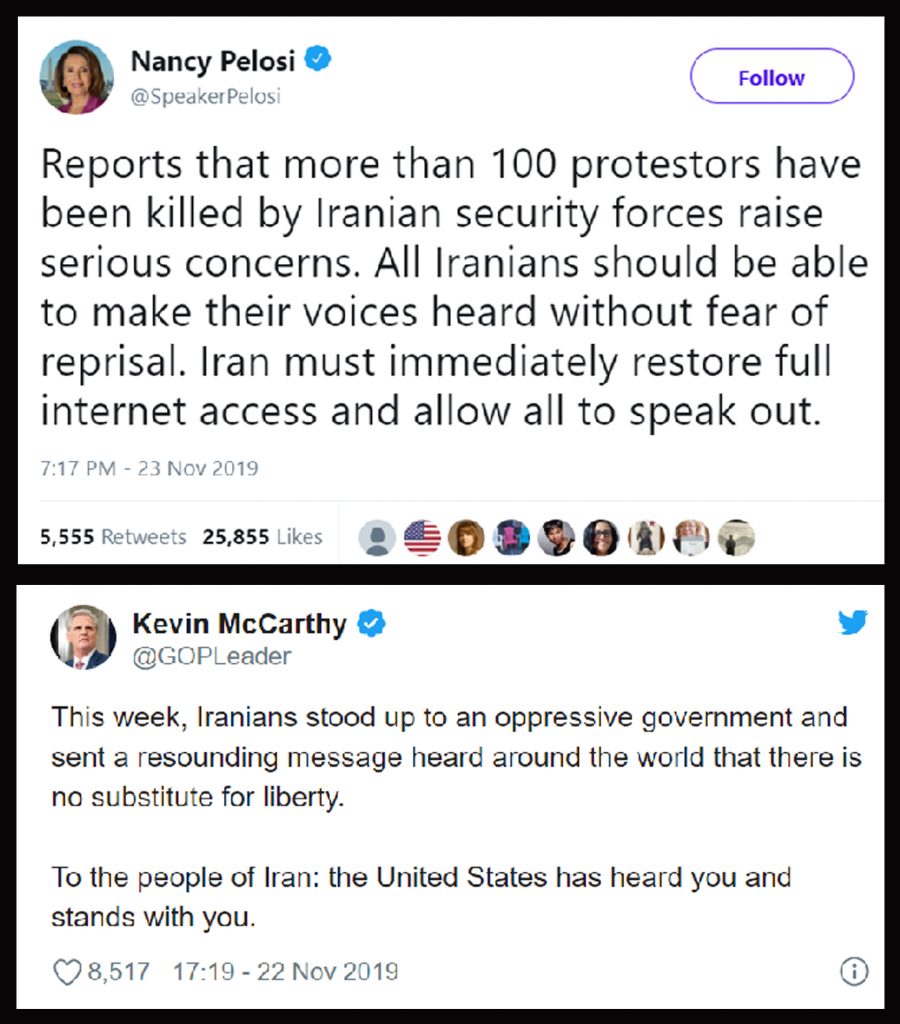 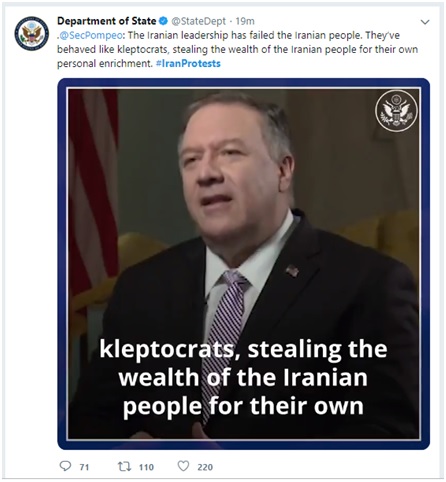 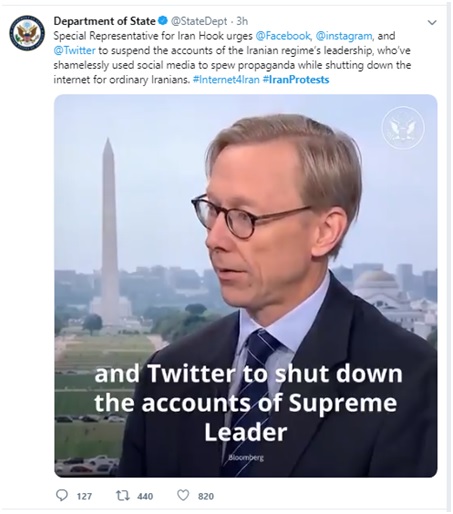 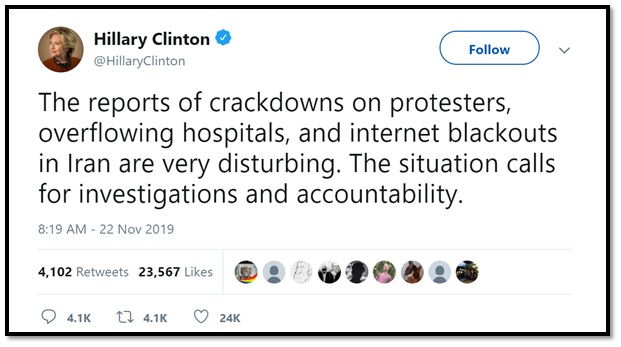 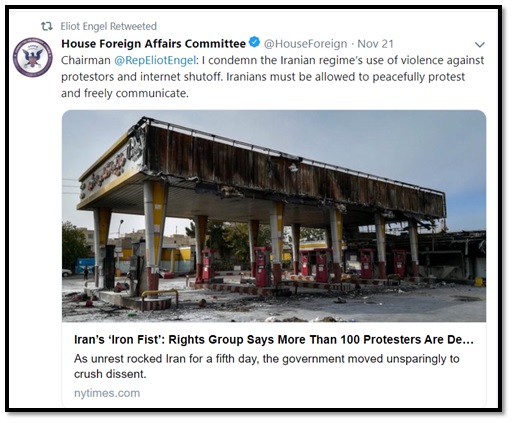 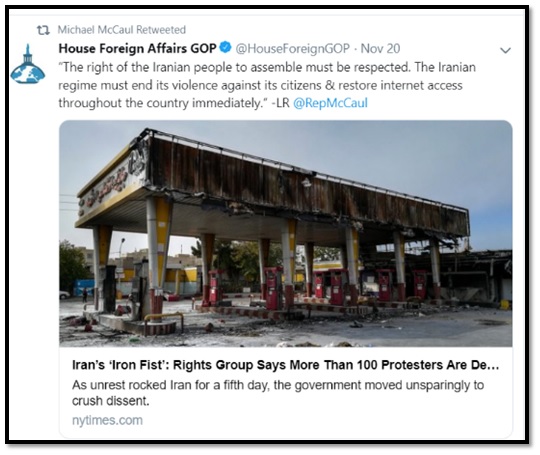 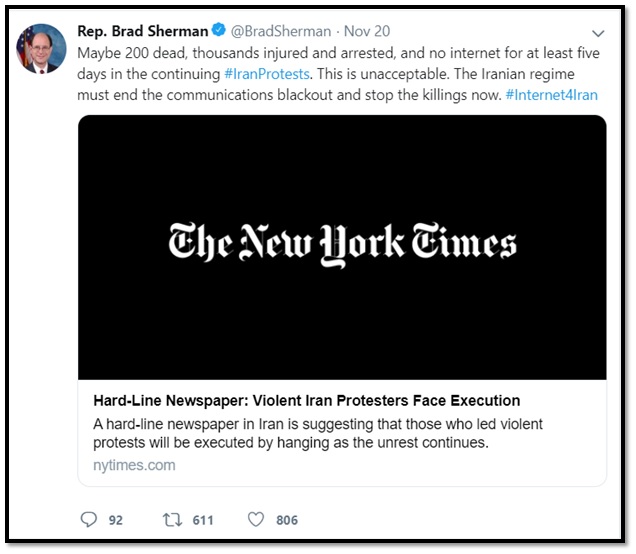 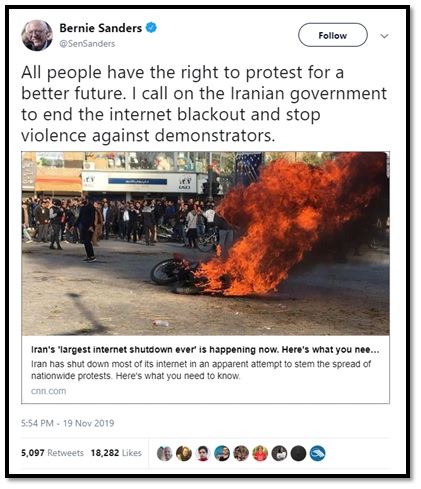 Suddenly, Iran is Aflame with Protest

Iran is suddenly seeing its largest protests in years, in over 100 cities — and the government’s cracking down hard. Amnesty International reports more than 100 deaths, while exile groups put   the figure above 200; official media admit to more than 1,000 arrests. In a bid to stifle further  demonstrations, the regime has imposed a nationwide Internet blackout and banned reporters    from covering the protests.

The anger broke out Friday after Tehran announced fuel rationing and a price increase of 50 percent. But protesters are now chanting, “Death to Rouhani” and “Death to Khamenei” — denouncing Iran’s president and its actual supreme leader — as well as “Death to the dictator.”

Government snipers have shot into the crowds from rooftops and even a helicopter, Amnesty reports, adding to “a harrowing pattern of unlawful killings by Iranian security forces, which have used excessive and lethal force to crush largely peaceful protests.” Ayatollah Ali Khamenei, the    supreme leader, calls the protesters “thugs” and “rioters” trying to destabilize the country at the    behest of foreign influences.

Funny: Iraq and Lebanon are weeks into mass protests aimed at Iran’s malign influence in those nations. Proving the protesters’ point, Tehran actually dispatched top security officials to counsel leaders in Beirut and Baghdad on how to crush those demonstrations. But now those experts have had to rush home to direct a domestic bloodbath. This wave of popular revolt may well fail — but it sure helps clarify just who is now responsible for the worst repression across the Middle East. 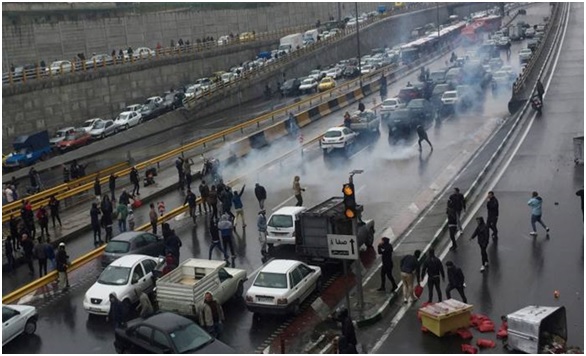 Iran: More than 100 protesters believed to be killed as top officials give green light to crush protests

Verified video footage, eyewitness testimony from people on the ground and information gathered from human rights activists outside Iran reveal a harrowing pattern of unlawful killings by Iranian security forces, which have used excessive and lethal force to crush largely peaceful protests in more than 100 cities across Iran sparked by a hike in fuel prices on 15 November, said Amnesty International today.

At least 106 protesters in 21 cities have been killed, according to credible reports received by Amnesty International. The organization believes that the real death toll may be much higher, with some reports suggesting as many as 200 have been killed. State media have reported only a handful of protester deaths, as well as the deaths of at least four members of the security forces.

“The authorities must end this brutal and deadly crackdown immediately and show respect for human life,” said Philip Luther, Research and Advocacy Director for the Middle East and North Africa at Amnesty International.

“The frequency and persistence of lethal force used against peaceful protesters in these and previous mass protests, as well as the systematic impunity for security forces who kill protesters, raise serious fears that the intentional lethal use of firearms to crush protests has become a matter of state policy.”

Under international law, security forces may only resort to the use of lethal force when strictly unavoidable to protect against imminent threat of death or serious injury.

Amnesty International is also calling on the Iranian authorities to respect the rights to freedom of peaceful assembly and freedom of expression, including through lifting the near-total block on internet access designed to restrict the flow of information about the crackdown to the outside world.

According to eyewitness accounts corroborated by video footage reviewed by Amnesty International, snipers have also shot into crowds of people from rooftops and, in one case, a helicopter.

While most of the demonstrations appear to have been peaceful, in some instances, as the crackdown by security forces escalated, a small number of protesters turned to stone-throwing and acts of arson and damage to banks and seminaries.

“Even if a small minority of protesters have resorted to violence, police must always exercise restraint and use no more force than is strictly necessary, proportionate and lawful in response to the violence they are facing. Violence by a few individuals does not justify a widespread reckless response,” said Philip Luther.

Even if a small minority of protesters have resorted to violence, police must always exercise restraint and use no more force than is strictly necessary, proportionate and lawful in response to the violence they are facing. Violence by a few individuals does not justify a widespread reckless response

Several eyewitnesses have said that security forces have been taking away dead bodies and injured people from roads and hospitals. In a pattern consistent with past practices, intelligence and security forces have refused to return the bodies of many of the victims to their families or have forced families to bury their loved ones in a rushed manner and without an independent autopsy to establish the causes and circumstances surrounding the deaths. This is contrary to international law and standards on the investigation of unlawful killings.

State media reported that, as of 17 November, more than 1,000 protesters had been arrested since the protests began.

Among those detained is human rights defender Sepideh Gholian, who was arrested on 17 November after taking part in the protests by peacefully holding up a sign about the petrol prices. Her whereabouts are currently unknown and Amnesty International fears that she is at risk of torture and other ill-treatment, in light of the authorities appalling track record of torturing detained human rights defenders.

“Anyone detained solely for peacefully taking part in demonstrations, expressing support for them or criticizing the authorities must be immediately and unconditionally released. All detainees must be protected from torture and other ill-treatment,” said Philip Luther.

The organization is calling for immediate action from the international community, including the UN and the EU, to hold the Iranian authorities to account for carrying out unlawful killings and violently repressing the right to freedom of expression and peaceful assembly.

On 16 November, less than a day after the protests began, the authorities implemented an ongoing near-total shutdown of the internet, shutting off nearly all means of online communications for people inside Iran. The resulting information blackout is a deliberate attempt by the authorities to prevent people from sharing images and videos of the deadly force being used by security forces.

According to the NGO NetBlocks, Iran’s connectivity to the outside world has fallen to 4% of ordinary levels since the protests began. All mobile networks have been disconnected and there is a near-total national internet and telecommunication blackout, although some users have still been able to access the internet through the use of virtual private networks (VPNs) and other means.

“Shutting down communications over the internet is a systematic assault on the right to freedom of expression and suggests that the authorities have something to hide. Iranian authorities must immediately lift all restrictions on access to the internet and social media to allow people to share information and freely express their opinions,” said Philip Luther.

Various government officials including the Supreme Leader, president and head of the judiciary have demonized the protesters and warned that security forces will confront protesters with force.

On 16 November, Iran’s interior minister said that the authorities will no longer show “tolerance” and “self-control” towards the protesters, despite mounting reports of protester casualties.

During a speech on 17 November, Iran’s Supreme Leader described the protesters as “villains” who were incited to violence by counter-revolutionaries and foreign enemies of Iran. He ordered security forces to “implement their duties” to end the protests, effectively giving the green light for the brutality to continue.

“Instead of giving a green light to brutality, the Iranian authorities must rein in their security forces to prevent further bloodshed. The long-standing pattern of impunity for unlawful killings and injuries in Iran is bound to continue unless independent impartial investigations are conducted into all suspected instances of arbitrary and abusive use of force, and those who commit such serious crimes and violations are held to account,” said Philip Luther.

“The UN and individual member states must publicly denounce Iran’s bloody crackdown. They should press the Iranian authorities to give access to independent human rights observers to hospitals and detention centres in the country, lift the blocking of the internet and invite UN mandate holders to conduct fact-finding visits.”

Protests erupted on 15 November following a sudden government announcement about a fuel price hike which will have a detrimental impact on people who are already struggling amid Iran’s economic crisis. Some demonstrators have chanted slogans calling for a radical overhaul of the political system and some have burned posters of Iran’s current and former Supreme Leaders.

Below is a breakdown, by city and province, of the 106 deaths reported so far to Amnesty International. The organization obtained the information from reports whose credibility and reliability it has ascertained by interviewing journalists and human rights activists involved in gathering them. It has then crosschecked the information.

Amnesty International is working to verify further reports of killings of protesters throughout Iran.