Sixteen years after the U.S. invaded Iraq, Americans–and particularly Iranian Americans–continue to ask why. Through the prism of history, foreign relations experts, historians, and politicians continue to grapple with exactly what the U.S. hoped to accomplish from invading Iraq on March 20, 2003–the start of the Iraq War. They debate whether American aims were successful. This brief post won’t provide a conclusion; it will, however, lay out some of the theories of why America invaded Iraq in the first place. History will be the judge of which conclusion is the correct one.

The Bush administration’s foreign policy team laid out a clear case for using invasion to find and destroy the suspected weapons cache of Iraqi leader Saddam Hussein. Officials warned that Hussein’s nuclear capabilities made him a serious threat to the safety and sovereignty of the United States. Former U.S. Secretary of State Condoleeza Rice put it in stark terms: “We do not want the smoking gun to be a mushroom cloud,” she said.

No nuclear weapons were ever found in Iraq. U.S. Armed Forces and intelligence also came up dry in the search for chemical or biological weapons. However, many international scholars theorize the Bush administration’s push for war was based on a sincere belief that Hussein was hiding WMDs, and that only a U.S. invasion could eliminate the threat of him using them.

Some international relations experts conclude that America invaded Iraq, in part, in order to spread democracy in the Middle East. In a November 2003 speech to the National Endowment of Democracy, then-President Bush told the audience, “The freedom we prize is not for us alone. It is the right and the capacity of all mankind.” He said his predecessors excusing the lack of freedom in the Middle East didn’t make the world safer.  “In the long run, stability cannot be purchased at the expense of liberty,” Bush said.

In 2018, Iraq held its fourth election since 2003, but the election boasted only 44 percent turnout, the lowest since fair elections began shortly after the war started. Despite low voter turnout and high poverty levels, U.S. news outlets report that there are signs of Democratic improvement in places like Baghdad. Violence in Iraq’s capital is at its lowest level in a decade, The Week reports. And the local economy is growing, thanks in part to reconstruction projects in formerly war-torn cities and towns. 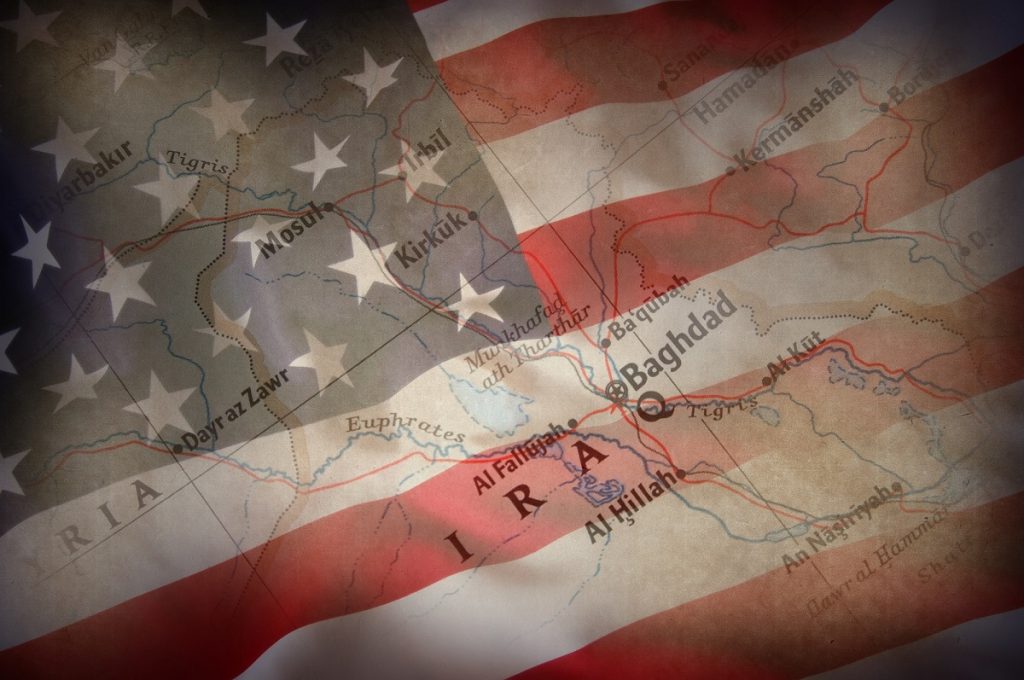 While Western media (particularly U.S. media) reports that a search for WMDs or a desire to spread democracy are primary reasons for the Iraq War, experts in other parts of the world sometimes theorize a more sinister logic for the U.S. invasion: a desire on the part of the U.S. to flex its muscles and show military strength.

Some foreign relations experts suggest that the U.S., reeling in the aftermath of the Sept. 11 terrorist attacks, sought a way to re-establish the country’s military dominance. Secretary of Defense Donald Rumsfeld alluded to the need to show strength on the evening of Sept. 11th, saying, “We need to bomb something else to prove that we’re, you know, big and strong, and not going to be pushed around by these kinds of attacks.”

Though Afghanistan was known as a harbor for the Taliban–the group who claimed responsibility for Sept. 11th–a victory over the small, unstable nation wasn’t perceived to be a big enough win to showcase America’s power, some believe.

The reason for the U.S. invasion of Iraq may never be set in stone. However, the effects of that action will continue to impact U.S. and Iraqi relations for decades to come.

US-Iran Relations and the Sports Diplomacy