Sepideh Qoliyan is currently serving an 18.6-year prison sentence in Iran’s Gharchak Prison for women after being arrested at workers’ rights protests in the city of Shush, Khuzestan Province, and publicly stating that she and fellow detainees had been tortured in the custody of the Intelligence Ministry.

She described the torture in a video statement she had published at an unknown date before she was arrested for a second time in January 2019 (her first arrest was in November 2018).

In her video statement, Qoliyan said agents beat her and other detainees with cables, and shocked the testicles of a male detainee, labor union representative Esmail Bakhshi.

Qoliyan and Bakhshi were initially arrested in November 2018 for participating in protests at Iran’s biggest sugar mill, the Haft Tappeh Sugarcane Agro-industrial Complex in the city of Shush, Khuzestan Province.

After they both publicly stated that they had been tortured, they were re-arrested, and in September 2019 sentenced to lengthy prison terms by notorious hardline Judge Mohammad Moghiseh at Branch 28 of the Revolutionary Court in Tehran.

On September 23, 2019, Qoliyan marked her 24th birthday in Gharchak Prison, which is known for its inhumane conditions.

Following is an excerpt of her statement translated by the Center for Human Rights in Iran (CHRI):

… They put us in a car and took us to the security police station, or the Intelligence Ministry’s local office, I’m not sure where exactly. Someone named Sadeghi came and made a threat against my life and said that if I didn’t talk [confess] they would bring in my brother and because we are from a religious family, Sadeghi would tell him things about me that would make my brother cut my head off. Then he cursed at me and made very rude sexual comments and made some baseless accusations against me in front of the prosecutor at the courthouse in Shush [city]. Then we were taken in front of a judge who read the charges against us. On the way to the courtroom to see Judge Nouri, I heard Mr. [Esmail] Bakhshi being severely beaten and howling, “I’m a worker, you broke my ribs.”

After informing us of the charges, we all got into a van blindfolded, with cuffs on our hands and feet. Mohsen 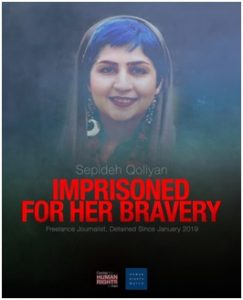 Armand, Mohammad Khanifar and I sat together and Mr. Bakhshi was with Seyed Hassan Fazeli. As soon as the van started moving, without any provocation or any words being said by us, the beatings began. They severely beat and beat and beat Mr. Bakhshi with batons and electric shockers. Then they beat me on the neck with batons and cursed at me with very ugly words and accusations and they forced me, and especially Mr. Bakhshi, to say bad things about ourselves. When Mr. Bakhshi said he could not breathe, they told him to show his lungs and they beat him again and shocked his testicles and his neck. It was terrifying. It was a horrible situation… I thought Mr. Bakhshi was dead.

When they got us out of the van, first they took Mr. Armand and Mr. Khanifar and took them away and then from under the blindfold I saw a stream of blood and they dragged Mr. Bakhshi away, beating him on his back with batons and they said, “You’re just pretending; nothing’s wrong with you.” Then they attacked me and after beating me, they took me to change clothes and they put me in a cell. After that day, the psychological tortures began and there were many physical confrontations in the interrogation room. I was being severely beaten.

My cell was right next to the torture room. The sound of torture until morning wouldn’t let me get any rest. Where we were being kept was where they were holding members of Daesh [Islamic State terrorist group]; you could tell from listening to the interrogations. For instance, they would ask, “Who made you become a Wahhabi [Sunni branch of Islam)?” “Who made you join Daesh?” The authorities even told us that they were taking us to a Daesh detention center. They said those who were involved in the September 22 [2018] terrorist attack [on a military parade in Ahvaz] were being kept here. They said, “To us, you’re no different than them. In fact, we feel greater danger from you.”

The interrogations started from 10 in the morning until late at night… until I got back to my cell at about two in the morning. I felt like my neck was broken. I couldn’t walk properly. I had become extremely thin. I couldn’t eat during the first few days. I was terrified that maybe Mr. Bakhshi had died.

During the first few days, the interrogators used cables to force us to confess that we intended to overthrow the state and that we were trying to usurp the labor movement when in fact, I’m just a simple university student and there’s no evidence that I was connected to any organization. On Twitter or Facebook, we have friends who are abroad but there’s no evidence that we were collaborating with them. The protests by Haft Tappeh workers were so large that they didn’t need us. I only went there [to the protests at the Haft Tappeh sugar mill in Ahvaz] as a student to show solidarity and support because of my situation and proximity to Haft Tappeh.

The interrogations continued with baseless sexual accusations and they made very serious threats that they would bring in my family; that they were waiting outside to cut me with a knife. They said I have a nervous disorder, that I had once attempted suicide, even though I have never even taken a painkiller. They wanted to convince me that I was sick. They said Mr. Bakhshi needs crystal meth [to make me think he’s an addict].

The beatings became more severe. They kept forcing me to make very bad confessions. At times, the beatings were so severe that I told the interrogator to write down whatever he wanted and I would sign it. I really didn’t know what they wanted. They were using cables and slapping me on the back of my neck to the point that… I said, “I never thought you were such tyrants. I never thought you were cruel to this extent.”