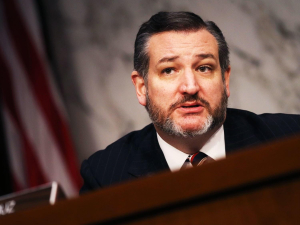 During a U.S. Senate policy briefing on Iran, held on March 12, 2020, with strong bi-partisan Senate support and representation from the Iranian-American leaders all across America, including Texas, Senator Cruz “called upon President Trump to invoke snapback sanctions under the Iran Deal.” 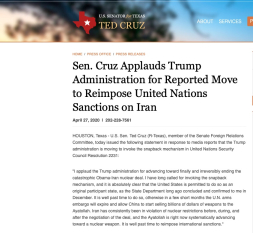 Our entire network, particularly the IAC-TX, and IACNT, are encouraged by Senator Cruz’s remarks on standing “with the men and women of Iran in their fight against” the “cruel, oppressive, murderous tyrants” in Iran. Having been a strong advocate for “applying a maximum pressure campaign against the Iranian regime, to hold them accountable for their human rights abuses and once and for all end their reign of terror,” Senator Cruz sets the correct tone in dealing with the Mullahs of Iran.

As a leading voice in the Senate, Senator Cruz has been on the forefront of correctly identifying what he calls the threat of a nuclear Iran as the single greatest national security threat facing the United States and the global community. We applaud his efforts to end oil

and nuclear waivers, and to invoke the U.N. snapback mechanism to restore international sanctions on the Iranian regime. We commend Senator Cruz for being a strong advocate for applying maximum pressure campaign against the Mullahs while holding them accountable for their human rights abuses and reign of terror.

Let us not forget how the people of Iran chanted across 200 cities last November saying, “death to the dictatorship” and “our enemy is here, they [regime] lie when they say it is America.” The people of Iran deserve to have a free country, and they deserve a bi-partisan voice in their support. A free Iran is the best guarantee to end decades of the global threat of Islamic fundamentalism, and its epicenter in Tehran.

Policy on Iran’s Human Rights Record: Why the UN Should Reconsider It