Thousands of Iranians took part in a colourful and well-organized rally across from the United Nations Headquarters in New York to reject Iran’s new president Hassan Rouhani, declaring that he is anything but a moderate. They urged the U.S. and the UN to act immediately to guarantee the safety and security of Iranian dissidents in Iraq and to demand Iraq release seven Iranian dissidents taken hostage during the raid by Iraqi forces on Camp Ashraf on September 1, which left 52 dead, some shot while handcuffed.

The Iranians who had come to New York from 40 states across America declared that Rouhani does not represent the Iranian people and that he has been a key official in the regime’s clandestine drive to acquire nuclear weapons, later boasting of deceiving the international community.

Carrying original Iranian flags and posters of the opposition leadership, the protesters, supporters of the Iranian opposition, underscored that Rouhani has colluded with Iraq to massacre 52 unarmed refugees at Camp Ashraf, Iraq, on September 1, and taking seven others as hostage.

They pointed out that Rouhani continues to provide military and financial support for Bashar Assad’s regime and that since his election more than 220 people, including women and minors, have been executed.

Mrs. Maryam Rajavi, the President-elect of the Iranian Resistance, spoke to the throngs of protesters via satellite from her headquarters at Auvers-sur-Oise, northwest of Paris.

“It is shameful for the United Nations to be hosting the president of an inhumane dictatorship in its General Assembly session. We see the hanging of Iranian youth in the streets continues unabated, the repression and summary arrests of women and youth on charges of mal-veiling has become even more widespread, and the new president of this regime has mounted an emphatic defense of his regime’s hegemonic goals in Syria, its nuclear program, and the Islamic Revolutionary Guard Corps (IRGC),” Rajavi said.

She added, “It is scandalously shameful to see the expression of so much flattery towards the mullahs when the mullahs are not only incapable of moderation but cannot even pretend to come close to it. This trend has outstripped even the well-known former appeasement policy. This is nothing more than a demagogic effort to avoid paying the price of a correct policy vis-à-vis the religious fascism ruling Iran.”

Referring to the September 1 massacre at Camp Ashraf, the opposition leader said, “The United Nations and the United States of America have in these past years repeatedly violated their promises of protection and provision of security for the PMOI/MEK. Even now, they are playing the shameful role of silent bystanders. There is no better gift for the hostage-takers in Baghdad and their puppet masters in Tehran than such silence. The silence of the US and the UN can only be interpreted as a denial of this kidnapping at a time when the twin dictatorships of Iran and Iraqrefuse to accept responsibility for it. I strongly urge the United States to compel the Iraqi government to free the hostages.”

Emphasizing that the 3,000 residents of Camp Liberty still face grave danger, Rajavi added, “I call on the international community, particularly on the UN and US, to use their influence to station a UN monitoring team with Blue Helmet forces in Liberty in order to provide for their protection in this camp until the final departure of all residents from Iraq.”

They rejected the notion of Rouhani being a moderate and said he is a terror master with a smile. They urged the US to stand by the Iranian people and the Iranian resistance for a regime change in Iran and the establishment of democracy and human rights. “The UN and the US have turned their backs on murder,” Giuliani said. “This must stop… Before he considers shaking hands with this man, Obama should know how much blood is on Rouhani’s hands,” Giuliani added.

SOURCE Association of Iranian-Americans in New York and New Jersey 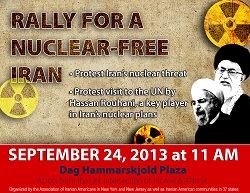 Posted on September 20, 2013 · Add Comment
NYC-Rally-Flier-OnNuclear2California Society for Democracy in Iran is sponsoring rally against Iran regime’s president Rouhani. Hundreds of our community members will travel to New York on September 24 to join thousands of Iranian-Americans & human rights advocates to protest visit to the UN by Rouhani whose regime has: