Senator John McCain (R-AZ), Chairman of the Senate Armed Services Committee, speaking at the Organization of Iranian American Communities (OIAC) Senate briefing at the Kennedy Caucus Room, titled “The New Administration and Iran Policy Options.” McCain said the nuclear deal was very deficient and that the Iranian regime must be held to account for its malign activities in the region, its crackdown on its own citizens and its defiance of Security Council resolutions related to a ban on ballistic missile testing. 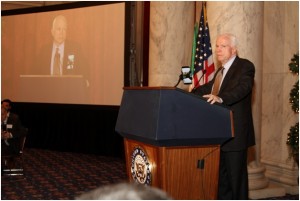