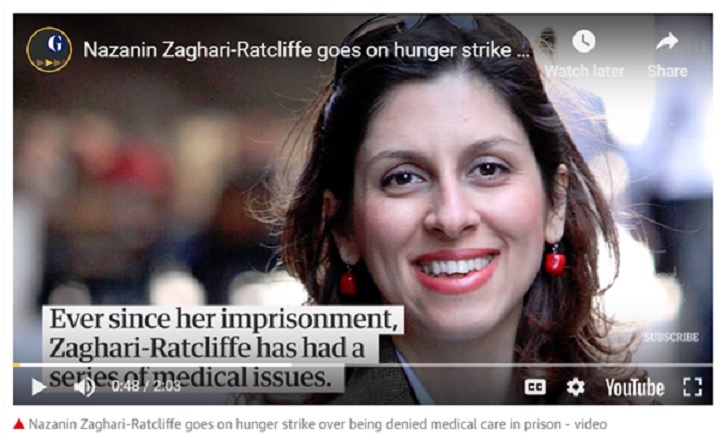 Nazanin Zaghari-Ratcliffe, the British-Iranian woman held by Tehran, started a hunger strike after her interrogators tried to persuade her to become a spy, her husband has claimed.

Richard Ratcliffe revealed his wife was calm as she began an initial three-day hunger strike in protest at the Iranian prison authorities’ refusal to give her a clear written undertaking that she would receive medical help for a lump on her breast, as well as other concerns.

He was speaking as the British foreign secretary, Jeremy Hunt, summoned the Iranian ambassador to demand the dual national, sentenced to five years in prison for espionage, was given proper medical help.

Ratcliffe said it was “now or never” for Hunt to escalate the situation by saying the British government would give his wife diplomatic protection, a means by which the row would be elevated to a state-to-state dispute, making an international legal claim for her to be visited by UK authorities in prison more likely to be granted.

Later on Monday, Ratcliffe met Hunt for about 40 minutes and discussed the prospect of granting his wife diplomatic protection.

A Foreign Office spokeswoman said: “The foreign secretary discussed this course of action with Richard Ratcliffe today and will continue to actively consider the question of diplomatic protection, alongside all other options in Nazanin’s case and the cases of other dual nationals detained in Iran.”

Ratcliffe said the foreign secretary vowed to “do all we can” to return his wife. Hunt described Ratcliffe as “inspirational” in a tweet featuring a picture of their meeting. “We will not rest until she is home,” he said.

He said the decision to disclose pressure on his wife from Iran’s Revolutionary Guards to spy via a job with British Aid was difficult, but he had been appalled by the associated warning that if she did not agree to the offer, there would be consequences for her family in Iran.

He said he had written to the Iranian foreign minister, Javad Zarif, to protest against the threat, and had informed the Foreign Office. He also released an account of the demands that she should spy for Iran, adding that everything in the country was filmed, and if she had agreed, it would have been used against her. It was the first time the Revolutionary Guards had visited her for more than a year.

Zaghari-Ratcliffe refused the offer outright, he said, insisting she did not wish to spy for either the UK or Iran.

He said the request to become a spy for Iran was made on 29 December at the same time as the Iranians offered a short-term release in January. Ratcliffe said a previous release turned out to be part of a power game in which Iran bartered her case for a favorable court outcome in the Iranian-British dispute over money owed to Iran by the UK for the sale of arms more than three decades ago.

Ratcliffe claimed his wife had been used as a clear bargaining chip in two previous hearings.

On Sunday, speaking in London at the start of his wife’s hunger strike, he also disclosed that Iranian prison authorities had discussed her condition with her for an hour and a half, but said they became angry when she demanded undertakings in writing to improve her medical help. “There have been too many broken promises and blockages to rely on empty words,” Ratcliffe said.

He added that her experience was that prison authorities played a game in which one branch of government made an offer, but only conditional on additional permission being given by another branch. The Iranians, he said, “were involved in an elaborate game of pass the responsibility”.

He said the Iranian prison medical chief had offered Zaghari-Ratcliffe a step-by-step process, as long as she complied with the Iranian prison regime, but refused to put this in writing. In recent months she had been denied medical help for a lump on her breast, pains in her neck, numbness in her legs and psychiatric difficulties.

The demands of the hunger strike, he said, were to see a specialist medical doctor and for any remedies they proposed to be granted.

Ratcliffe described the Iranians as scrambling in response to public pressure. “This is not a game,” he said, adding that he knew if she chose to extend the hunger strike, the risks would multiply.

Monique Villa, the chief executive of the Thomson Reuters Foundation, Zaghari-Ratcliffe’s employer, said denying her employee medical access, including for new lumps found on her breasts in December, was a form of torture.

“She’s not spy material,” Villa said. “She’s innocent. She should be released immediately and she should have immediate medical access.”