TEHRAN, IRAN – APRIL 22: An Iranian policewoman (L) warns a young woman about her clothing and hair during a crackdown to enforce Islamic dress code on April 22, 2007 in Tehran, Iran. Police issued warnings and conducted arrests during an annual pre-summer crackdown, which was given greater prominence this year, according to officials. (Photo by Majid Saeedi/Getty Images) *** Local Caption *** 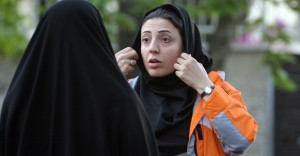