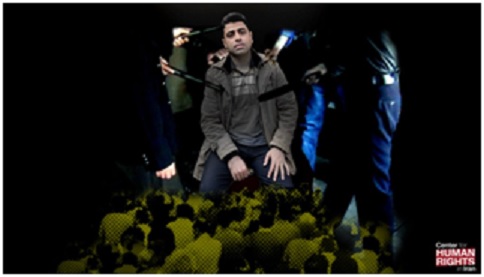 Held Without Access to Lawyer, Bakhshi Beaten During 25-Day Detention

January 4, 2018—The beating and torture of the labor activist Smaeil Bakhshi (also spelled Esmail Bakhshi), while he was in detention by agents of Iran’s Intelligence Ministry, is a blatant violation of international and domestic Iranian law, and the authorities in Iran should immediately investigate and prosecute any officials involved, the Center for Human Rights in Iran (CHRI) said in a statement today.

CHRI also calls on the UN and the international community to forcefully communicate to the authorities in Iran that the violent and unlawful abuse of detainees is unacceptable.

Bakhshi, a representative of protesting Haft Tappeh sugarcane workers in Shush, southwest Iran, revealed in a letter posted on Instagram on January 4, 2019, that he was severely beaten during his 25 days in detention and left with serious and lasting physical injuries.

“Iranians take great risks to expose these violations, and the Rouhani administration, parliament and the judiciary should respond to these courageous voices for justice and protect them.” said Hadi Ghaemi, CHRI executive director.

“Yet so far, Rouhani has remained silent, refusing even to hold his own agencies accountable for these violations, and a complicit judiciary protects the state officials who commit these abuses” Ghaemi said.

CHRI urgently calls on the authorities in Iran to:

CHRI calls on the UN and all Member States to:

In the letter Bakhshi posted on Instagram, he described his torture and resulting injuries. “During the first few days, without reason or any conversation, they tortured me and beat me with their fists and kicked me until I was going to die. They beat me so much I couldn’t move in my cell for 72 hours. I was feeling so much pain that I couldn’t even sleep without suffering,” Bakhshi wrote in his open letter.

“Today almost two months after those difficult days [Bakhshi was released on bail December 12, 2018] I still feel pain in my broken ribs, kidneys, left ear and testicles,” he added.

“But worse than the physical torture was the psychological torture. I don’t know what they did to me but I turned into a washed-up rat. My hands are still trembling. I used to walk with my feet firmly on the ground but I was humiliated into a different person. I still get severe panic attacks despite taking [anxiety medication].”

“I have a question for His Excellency the Intelligence Minister, who happens to be a religious cleric: From an ethical and humanitarian perspective, what is Islam’s ruling on torturing a detainee? Is it permissible? If so, to what extent?”

Article 38 of Iran’s Constitution states that “All forms of torture …are forbidden” and the International Covenant on Civil and Political Rights (ICCPR), to which Iran is a State Party, states in Article 7: “No one shall be subjected to torture or to cruel, inhuman or degrading treatment or punishment.”

Bakhshi continued: “More important than the physical and psychological torture was the recording of phone conversations between me and my family by your intelligence agency. My interrogator said he knew everything about my life. He said he knew how many times my wife had fought with me because of my labor struggles. When I asked how he knew, he said my phone calls were recorded for a long period of time.”

“Now my question to you as the Intelligence Minister, a cleric and religious person is: From an ethical and humanitarian perspective, does Islam allow the recording of the most private conversations between human beings?”

Article 25 of Iran’s Constitution states “the recording and disclosure of telephone conversations…and all forms of covert investigation are forbidden.”

Continuing to address President Rouhani’s Intelligence Minister, Bakhshi said: “Mr. Alavi, I am still suffering from the terrible impact of the 25 days of unjust detention by the Intelligence Ministry…but those two basic questions are eating my brain and only you can answer them. I and the honorable people of Iran have the right to know the answers… Therefore I, Smaeil Bakhshi, challenge you, Mr. Alavi, to a live televised debate to hear your response.”

The abuses committed against Bakhshi include not only unlawful arrest and torture under detention, but denial of due process as well. In an interview with Kalame on December 2, 2018, Bakhshi’s lawyer, Farzaneh Zilabi, expressed concern for her client’s condition whom she had not been able to meet while in detention.

On November 29, 2018, Sadegh Jafari Chegani, the judiciary’s representative in Shush dismissed earlier reports that Bakhshi had been physically abused. “The reports published in cyberspace and by enemy media outlets are totally false and the suspect, Smaeil Bakhshi, is completely healthy and he had telephone contact with his family today,” Chegani said.

The judiciary official added: “Publishing such false reports are aimed at disturbing public opinion at a time when a portion of the lawful demands for the payment of back salaries to the sugarcane company workers has been met and preparations have been made to harvest the sugarcane in the fields.”

Rouhani and Parliament Silent on Abuses

During his nearly six years in office, President Rouhani has remained silent on human rights abuses committed by government agencies under his control, including the Intelligence Ministry, which reports directly to the president and has become a leading human rights violator, responsible for the arrest of numerous activists, journalists, students and religious and ethnic minority leaders.

This record directly contradicts the verbal pledges Rouhani repeatedly made during his 2013 and 2017 presidential campaigns to defend citizen rights, and the Citizens’ Rights Charter he signed that ostensibly defends Iranians’ civil and political rights. Article 60 of the charter states “physical or psychological torture…shall constitute a violation of citizens’ rights; and, aside from being legally prosecutable, the results obtained through these means will not be admissible.”

Members of Iran’s Parliament have also failed to question Intelligence Minister Alavi about the abuses reportedly committed by agents of his ministry.

The public revelation of Bakhshi’s physical abuse by security and judicial agents has led to a public outcry in Iran on social media, with hundreds of journalists and activists demanding an investigation and punishment of those responsible for the violations of both domestic and international laws.

Tehran-based attorney Ali Mojtahedzade tweeted: “Revelations of torture by Smaeil Bakhshi need a response from the Intelligence Minister as well as most certainly from Rouhani, Mr. Alavi’s boss, who bears responsibility. But primary responsibility rests with the judicial system which has to step in and punish the perpetrators in front of the nation.”

Other commentators noted that the torture of Bakhshi was not an isolated incident. Labor affairs reporter Roozbeh Bolhari tweeted: “Before Smaeil Bakhshi there have been other workers who also suffered torture, such as Reza Shahabi, and Mahmoud Salehi, who lost his kidneys in the detention center of Rouhani’s Intelligence Ministry.”

During the protests that roiled Iran in December 2017-January 2018, and have continued intermittently even if less intensely since then, there were numerous reports of beatings of detainees that were being held without charge and the suspicious deaths while in detention of several of them, none of which ever received an independent investigation.

The psychological and physical abuse, beatings, torture and even deaths in Iranian prisons have been long documented and condemned by the United Nations and international human rights organizations.

The February 2018 report of the UN Secretary-General on Iran stated that “The Secretary-General remains concerned about continuing reports indicating that the practice of torture and ill-treatment in the Islamic Republic of Iran persists. Such reports point to a pattern of physical or mental pressure applied upon prisoners to coerce confessions.… Incidents documented and reported by civil society organizations include blunt force trauma, positional torture, burns, sharp force, electric shocks, use of water, crushing, pharmacological torture, asphyxiation, and amputation, as well as sleep deprivation, threats, humiliation, and prolonged solitary confinement.” The UN Special Rapporteur on human rights in Iran also expressed concern in his September 2018 report on Iran over reports relating to the commission of torture.

Many of the comments posted by Iranians on social media similarly expressed frustration over the long and continuing pattern of torture in Iranian prisons and detention centers.

Arash Bahmani, an Iranian journalist, wrote: “It’s very interesting to see the reaction of those who, after reading Smaeil Bakhshi’s letter, suddenly realized there’s torture going on in the prisons and though the prisons were a paradise. Torture has always been committed under all governments in the Islamic Republic since the beginning until today, especially against political prisoners and prisoners of conscience.”

Documentary filmmaker Mostafa Azizi commented: “We listen to Smaeil Bakhshi in disbelief as he bravely tells us about torture from the wolf’s den. Savage acts of torture have been the norm in this past 40 years but challenging them so blatantly inside the country has been rare. Let’s spread his words. He’s the enchained symbol of human dignity.”

Workers Unable to Peacefully Demand Their Rights in Iran

Bakhshi’s original arrest and detainment took place within a larger context of labor unrest in Iran and workers’ inability to peacefully defend their rights. In particular, workers have been protesting the lack of payment of wages and the arrest of labor leaders who try to peacefully address this issue.

The issue of unpaid wages has been a continuous one in Iran over the last few years, with numerous companies in a broad range of sectors, including steel, sugar refining, equipment manufacturing and other industries refusing to pay workers—at times for months on end. When workers protest, they are arrested.

The rights of Iranian workers have been severely violated by the inability of independent unions to function effectively, undermining collective bargaining and grievance mechanisms. Striking workers risk termination of employment and arrest, and independent labor leaders are routinely prosecuted and sentenced to long prison terms under sham national security-related charges.

The Judiciary branch in Shush has charged Bakhshi with “disturbing public order” and “assembly and collusion against national security.” In addition, in Ahvaz, the capital of Khuzestan Province, he is facing the charge of “membership in an organization with intention to disturb national security.”

The inability of Iran’s workers to demand payment for work done, to peacefully demand their rights and protest are in clear violation of Iran’s domestic and international legal commitments.

In addition to detained Haft Tappeh workers, Iran’s Intelligence Ministry agents on December 4 in Tehran arrested Asal Mohammadi, a young journalist who had been posting reports about the protesting sugarcane workers. Mohammad was later transferred to the ministry’s detention center in Ahvaz.

“Iranian citizens are arrested unlawfully and then risk life and limb once behind bars because Iran’s intelligence and security officials can beat, torture and sometimes even kill detainees with complete impunity,” said Ghaemi. “The international community must communicate the unacceptability of this behavior to Iranian officials at every bilateral and multilateral opportunity.”