ISTANBUL — Iran’s Revolutionary Guards are facing crises on multiple fronts as they grapple with the killing of their chief military strategist, Maj. Gen. Qasem Soleimani, and a domestic backlash over their downing of a passenger jet, according to analysts and officials in the region.

Soleimani’s death in a U.S. drone strike last month has forced the Islamic Revolutionary Guard Corps to recalibrate its strategy and weigh the risk of further escalation in the conflict with the United States, they said. The group, Iran’s most powerful security force with sway both at home and around the region, must also rebuild the domestic standing it lost because of its role in the airline disaster and in a crackdown on anti-government demonstrators in November, which left hundreds of protesters dead.

Publicly, the group’s leaders appear unbowed by the recent setbacks. Earlier this month, they unveiled new weapons technology that they said would let them develop a more advanced arsenal of ballistic missiles. Last week, U.S. Central Command said that the U.S. Navy intercepted a ship carrying Iranian-made weapons, cargo they said was destined for Iran-aligned Houthi rebels in Yemen.

The Revolutionary Guards also appeared to get a boost in Iran’s parliamentary elections on Friday, which produced a victory for hard-line candidates the group usually supports after many moderate politicians were barred from running.

But analysts and officials in the region say the Revolutionary Guards in fact now find themselves on the back foot, a notable change after successfully projecting their power in the Middle East over recent years.

“The assassination of Qasem Soleimani and the downing of the airliner were both shocks to the Revolutionary Guard. Soleimani was a big loss for the Islamic Republic, and the downing of the airliner, it blew the Guard’s entire credibility,” said Saeid Golkar, an expert on Iran’s security forces and professor of political science at the University of Tennessee at Chattanooga.

The IRGC, which was established to protect the Islamic Republic, “has to rebrand and rebuild its reputation, which takes time, especially with a population that has grown critical of the Islamic Republic,” Golkar said. “And now the strategy is not to go to war with the United States but to test its limits step-by-step — and not to overreach.”

That challenge, in part, will fall to Brig. Gen. Ismail Qaani, who has replaced Soleimani as commander of the IRGC’s elite Quds Force. He will have to preserve Iran’s regional influence and nurture the proxy groups and militias developed by his predecessor — but without provoking a forceful U.S. reaction.

By stepping back from conflict, the Quds Force would have a chance to reassess its strategy and adjust to new leadership under Qaani, 62, who had been Soleimani’s deputy and previously handled the force’s day-to-day administrative affairs, analysts and officials said.

“This is an organization that evolves, adapts and learns lessons,” said Ariane Tabatabai, a political scientist at Rand Corp. in Washington. She said Qaani “will be a bit more low-key” than Soleimani, who won celebrity status by designing and executing a military strategy that helped secure Iran’s role as a regional power.

“He’s been a part of the force for a while, and he’s done a lot of things with the Revolutionary Guard,” she said of Qaani. “He has dealt with intelligence and with operations, which positions him well.”

Qaani’s previous portfolio included Quds Force operations on Iran’s eastern borders, including in Afghanistan and other Central Asian republics. That means Qaani could be more comfortable using Afghanistan as a venue for attacks on U.S. forces.

Still, analysts and officials say he lacks the ambition, charisma and strong connections of his predecessor. As a result, according to an official in the region with knowledge of the matter, the Quds Force has been significantly deterred from retaliating further against the United States, at least for now.

The official, who spoke on the condition of anonymity to discuss intelligence matters, said Qaani does not yet have the power to freelance the way Soleimani did, coordinating battles and attacks across the Middle East and meeting directly with foreign leaders. The Quds Force, the official said, is suffering both emotionally and practically, and will be restrained until Qaani grows more confident and independent.

Within Iran’s security apparatus, a struggle may already be underway to clip the Quds Force’s wings. According to Golkar, the Revolutionary Guard’s secretive counterintelligence department is likely investigating the security breaches that contributed to Soleimani’s killing in Baghdad last month.

Tensions between Iran and the United States have soared in recent years as the Trump administration pressured Iran to roll back support for allied militias in places such as Iraq and Syria, and to abandon its ballistic missile program, which the White House says threatens U.S. allies in the region.

In 2018, President Trump withdrew the United States from the nuclear deal Iran struck with world powers, reimposing sanctions that were lifted under the agreement in exchange for curbs on Tehran’s atomic energy program. Since then, the administration has blamed Iran for attacks on commercial tankers in the Persian Gulf, as well as rocket strikes on U.S. troops in Iraq and a complex drone and missile operation targeting Saudi Arabia’s state oil company in the fall.

The U.S. decision to kill Soleimani came after a rocket attack on an air base hosting American forces in the Iraqi province of Kirkuk, which killed a U.S. contractor. The Trump administration blamed an Iran-backed group, Kataib Hezbollah, for the strike.

The targeted killing of Soleimani was followed by a direct Iranian missile attack on bases hosting U.S. troops in Iraq. Then, as they braced for a response, the Revolutionary Guards shot down a Ukrainian passenger jet mistaken for a hostile aircraft, killing all 176 people on board. The group denied involvement for days, sparking a wave of demonstrations in Iranian cities.

That was the second time the Revolutionary Guards confronted widespread protests in recent months. In November, popular discontent over fuel prices boiled over into anti-government demonstrations. 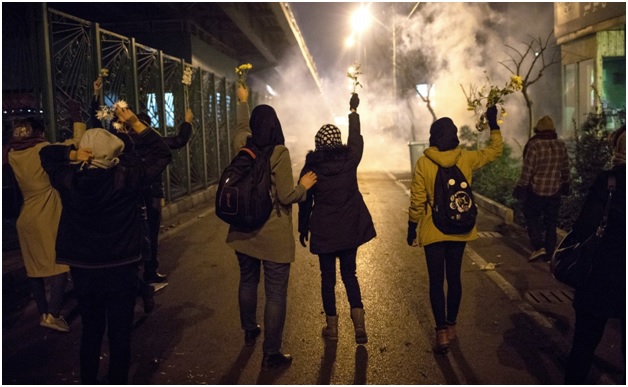 Protesters hold flowers as tear gas fired by police rises at a demonstration in front of Amir Kabir University in Tehran to remember victims of a Ukrainian airplane shot down by an Iranian missile on Jan. 11. (AP)

“For people like me, who did not support Soleimani, we were so angry and upset after the downing of the plane and the crackdown on protests in November,” said Parisa, 35, a pharmaceutical sales representative in Tehran. She declined to give her full name out of fear of reprisals from security forces.

“But even those who supported Soleimani were confused after the downing of the plane, and many became silent or felt like they had to explain themselves,” Parisa said, adding that the airline disaster demonstrated that the Revolutionary Guard “does not have good military technology.”

The Islamic Republic and Revolutionary Guard “are very concerned about domestic unrest. . . . You don’t go out and kill hundreds of people in 72 hours and shut down the Internet if you’re confident,” Tabatabai said of protests in November, when the government imposed a blanket Internet shutdown.

“None of this screams that this is a political system that is confident in itself,” she said.

According to Maysam Behravesh, a former security policy adviser in Iran, the Revolutionary Guard “is facing a support base problem, if not crisis, at home as even sympathizers and supporters are seeing so much corruption, repression, incompetency.”

The airline disaster in particular “raised serious questions of competency, trust and legitimacy, even among the Islamic Republic’s core support base, which is partly why the Revolutionary Guard was finally compelled to come clean,” said Behravesh, who is now an analyst at the Washington-based political risk firm Gulf State Analytics.