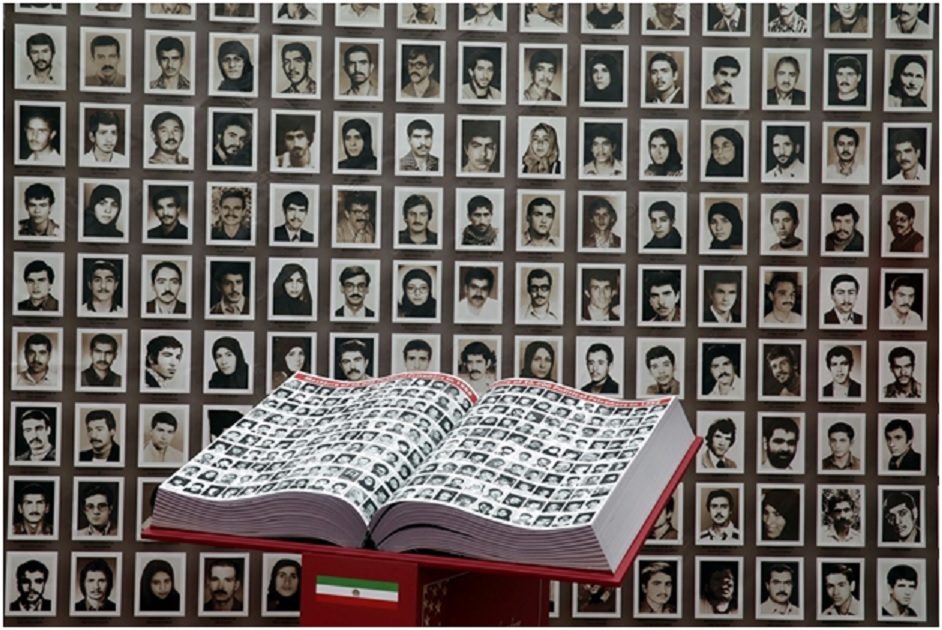 Morgan Ortagus, the spokesperson of the United States State Department, in a video message on Twitter, while condemning the Iranian regime’s ongoing human rights violations, particularly the 1988 massacre of thousands of political prisoners, called on the “international community to conduct independent investigations and do provide accountability and justice for the victims of these horrendous violations of human rights, organized by the Iranian regime.”

“July 19th marks the anniversary of the start of Iran. So-called death commissions on the orders of Ayatollah Khomeini. These commissions reportedly forcibly disappeared and extra judicially executed thousands of political dissident prisoners. The current head of the Iranian judiciary and current minister of justice have both been identified as former members of these death commissions.

The Iranian judiciary is widely perceived to lack independence and fair trial guarantees. And the revolutionary courts are particularly egregious in ordering violations of human rights. All Iranian officials who commit human rights violations or abuses should be held accountable. The United States calls on the international community to conduct independent investigations and do provide accountability and justice for the victims of these horrendous violations of human rights, organized by the Iranian regime,” she said in a video message on Twitter. 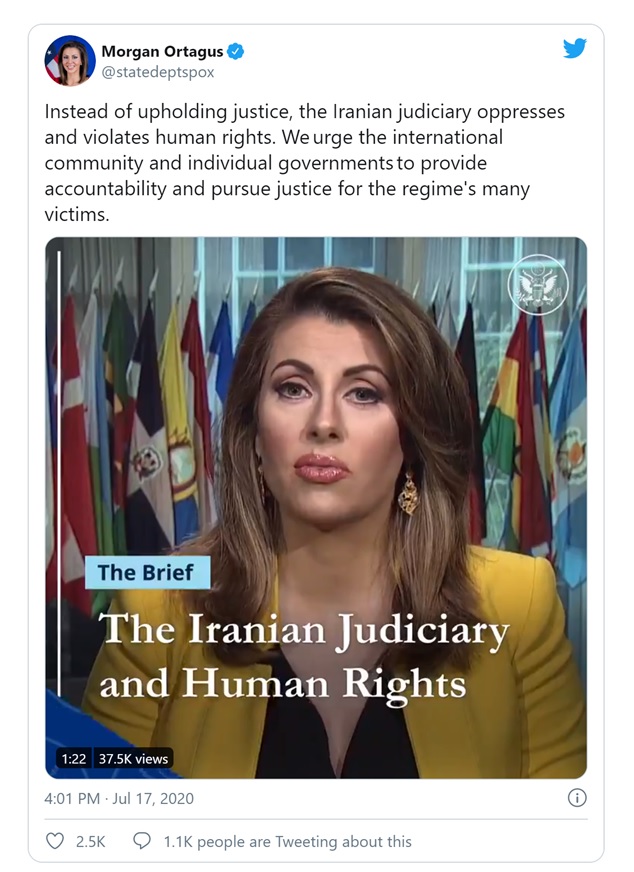 In response, while welcoming this position, Mrs. Maryam Rajavi, the president-elect of the National Council of Resistance of Iran (NCRI), said on Twitter: “I welcome the call by the State Department spokeswoman for an independent investigation into the actions of the death commissions during the #1988Massacre and demand justice for the martyrs. Perpetrators must be brought to justice. Dispatching international  fact-finding missions to Iran, joined by the MEK & Iranian Resistance representatives to prevent regime’s cover-up of the 1988 Massacre (crime against humanity), especially of the graves and precise figures of the martyrs in prisons and  cities across Iran is an imperative.” 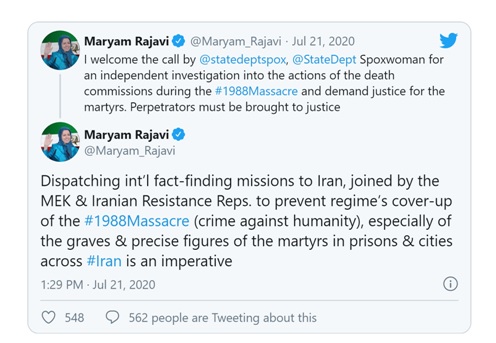 In the summer of 1988, the Iranian regime executed over 30,000 political prisoners in a matter of a few months. Most of the victims were supporters and members of the Iranian opposition People’s Mojahedin Organization of Iran (PMOI/MEK).

The call by the State Department was simultaneous with the NCRI’s 3-day “Free Iran Global Summit” which started on July 17. During this event, the NCRI connected thousands of people from over 30,000 locations to Ashraf 3, Albania, home to thousands of members of the MEK. These conferences were attended by over 1,000 political dignitaries from all four corners of the world. 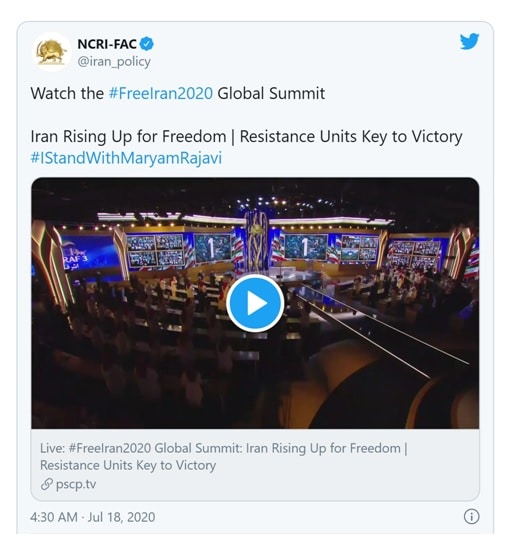 The 1988 massacre was the theme of the second day of this conference. The participants called on the international community to initiate an independent investigation, hold the regime’s officials to account for this “crime against humanity” and end the regime’s impunity. During this event, Mrs. Maryam Rajavi, who was the keynote speaker, reiterated: “The sacred blood of those martyrs in 1988 massacre are today roaring in Iran, giving rise to generation after generation of rebellious youths. I would only recall this popular slogan about the massacre of handcuffed prisoners in 1988: We will neither forgive, nor forget.” 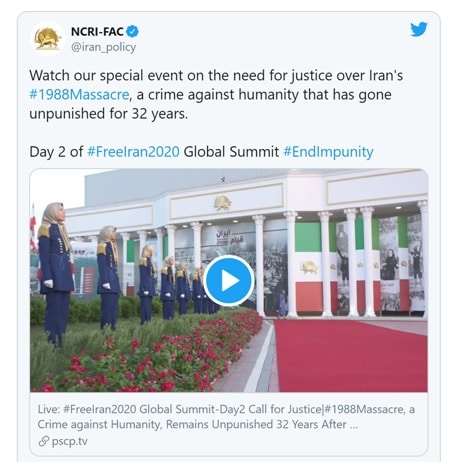 Tahar Boumedra, the former head of the UN’s Human Rights Office in Iraq, said: “The crime committed against political prisoners in the 1988 Massacre has been well established and documented. The UN and relevant institutions have been informed and received documents on this issue.”

Renowned human rights lawyer and ex-UN judge Geoffrey Robertson previously investigated the 1988 massacre. He told the conference he was “staggered” by what he uncovered, describing it “as the worst crime against humanity since World War II.” He said that the perpetrators must be held to account. 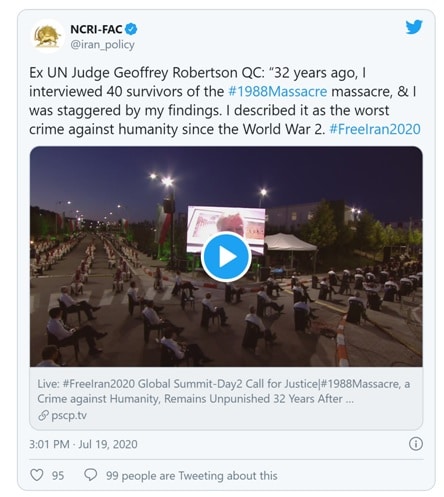 Mrs. Rajavi started the Call-for-Justice movement in 2016. This movement has had an important impact on the Iranian society and the regime. In this regard, Mrs. Rajavi said: “As you are aware, the Call-for-Justice movement played a significant role in foiling Khamenei’s scheme in the regime’s presidential elections in 2017 where he intended to engineer the election of Ebrahim Raisi, who was a member of the death committees which issued sentences for victims of the 1988 massacre. The campaign was so effective that (the regime’s president, Hassan) Rouhani used it to attract more votes for himself.

Opportunistically, he said Raisi did not have anything on his record except 38 years of executions and imprisonments. Two days later, an infuriated Khamenei flanked by Qassem Soleimani and IRGC commanders, slammed Rouhani, warning him against crossing the regime’s red lines.”

“Then, he openly “recommended” that his functionaries in the Intelligence Ministry write articles and make movies and do something to prevent Raisi from being exposed. In the next steps, when the international Call-for-Justice movement climaxed, the regime undertook its own special schemes which it called “a complex multi-faceted operation.” It recruited a mercenary to distort the objectives of the Call-for-Justice movement, and marginalize the PMOI/MEK organization and their leadership, despite the fact that the PMOI/MEK’s destruction was the main goal of the 1988 massacre and Khomeini’s fatwa,” she added.

The 1988 massacre was a crime against humanity, and the international community must hold the regime’s officials to account for this crime.  As Mrs. Rajavi said: “Perpetrators must be brought to justice. Dispatching international fact-finding missions to Iran, joined by the MEK & Iranian Resistance representatives to prevent regime’s cover-up of the 1988 Massacre (crime against humanity), especially of the graves and precise figures of the martyrs in prisons and  cities across Iran is an imperative.”