#IranProtests- Fox News interview on Recent protests in Iran- CIA director stated: Iranian protests is at the start point and will not never stop.

Newt Gingrich the former Speaker of the United States House of Representatives from 1995 to 1999 supports Iranian protesters against Iranian brutal government.

Newt Gingrich & Congressman Tom Garrett are among speakers at a rally outside the White House in support of Iran protests.

https://www.youtube.com/watch?v=vPoneJAXY4M
Newt Gingrich & Congressman Tom Garrett are among speakers at a rally outside the White House

#IranProtests – Sistan and Baloochestan- Kids chanting down to Khamenei, after School, Jan07,2018
OIAC

#IranProtests, People of Iran has broken through the fear of brutal dictatorship. Middle school students in Iran are shouting Down With Khameneie after school closure.

#IranProtests – Sistan and Baloochestan- Kids chanting down to Khamenei, after School, Jan07,2018

Heart breaking scene: Police has killed two young protesters, trying to steal their corpse from hospital but the families preventing them.

Jan. 6 ppl capture a regime agent, but let him go. They chant, no fear, we are all together. Oranization of Iranian American Communities.

When Iran agreed in 2015 to halt its nuclear weapons program, ordinary Iranians expected rapid economic improvement with the lifting of strict international sanctions. More than two years later, most Iranians remain no better off. Today, that fact, and the sense of hopelessness it is inciting, is costing the government something money can’t buy. 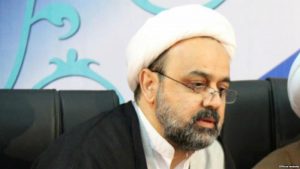 A top Iranian judiciary official has said antigovernment protest leaders should be handed the harshest possible sentences, while President Hassan Rohani suggested demonstrations were driven by opposition to his ultraconservative rivals in the ruling elite.
Rohani and Hamid Shahriari, deputy head of Iran’s judiciary, spoke on January 8 — nearly two weeks after the start of a series of protests that have shaken the country and attracted attention worldwide.
The ISNA news agency quoted Shahriari as saying that “surely those who organized and led the unrest against the establishment can expect the maximum penalty.”

America can and should help the cause of freedom in Iran 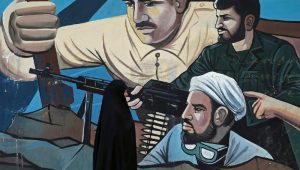 Cracks are forming in the iron grip of the Iranian regime. The latest wave of protests sweeping Iran demonstrates yet again that dictatorial regimes are inherently doomed because they lack the enduring consent of the people they rule.
Yet just as our forefathers required foreign assistance to finally shed the chains of tyranny, we too must stand with the Iranian people as they defy their oppressors. Utilizing our economic, political, and technological might, rather than armed intervention, the United States should rectify past inaction and amplify the voices of Iranians.

What to watch for in Iran’s turmoil 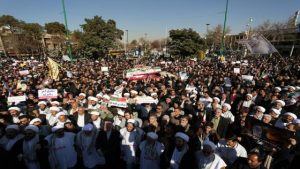 In contrast to its counterparts in Europe, the Trump administration has forcefully backed Iran’s protesters and their political aspirations, and U.S. officials are now contemplating their next steps in support of Iran’s opposition. As they do, they should keep their eyes on three key factors that will help determine the success or failure of today’s ferment.

Outside Iran’s Most Notorious Prison, Calls for Loved Ones to Be Freed 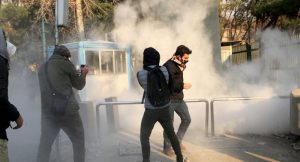 TEHRAN – The man stood outside the notorious Evin Prison in Tehran on Sunday, his hands deep in his pockets as snow continued to fall. His son Majid had been inside the prison for over a week, after being arrested during the largest antigovernment demonstrations Iran has seen in years.
“My wife and I are here every day,” said the man, who gave only his first name, Hossein. “I don’t want trouble. I just want my son released.” Majid, a 32-year-old employee at a telecommunications company, calls from prison daily. He had not been protesting at all, his father insists, and was arrested by mistake. 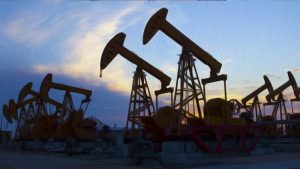 Mass protests are gripping Iran as its people express their discontent with crippling poverty, governmental corruption, and Tehran’s highly expensive sponsorship of terrorist proxies around the Middle East. The protests are geographically widespread, rural and urban, and challenge the very sinews of Iran’s mullahcracy. The United States can and should support Iranian freedom by pressuring the regime at its most vulnerable point, oil revenues. This strategy should have long- and short-term components, both designed to decrease global oil prices.
Iran’s dire economic situation is at the heart of this discontent. As President Rouhani acknowledged, the government cannot meet payroll and is seeking to increase revenue and decrease expenditures. Since 80% of Iran’s budget comes from petroleum exports, the quickest and surest way to bring about regime change in Tehran is a broad campaign to reduce current global oil prices.

Why the Iranian Uprising Won’t Die 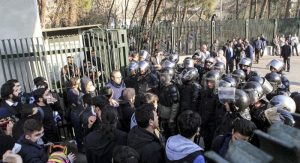 Even if these protests are snuffed out, a new line has been crossed. There’s no going back.
Modern Iran has faced many uprisings, insurgencies and revolutions, from the 1905 Constitutional Revolution to the 1979 revolution to the 2009 Green Uprising. So the mass protests against the Islamic Republic that have taken place over the past few days are not unprecedented. But Iran has not witnessed such a storm since 2009, and possibly 1979. The Iran uprising of 2017 is the biggest challenge Iran’s theocracy has ever faced.

‘We are your voice here’: Toronto demonstrators rally in support of Iranian protesters 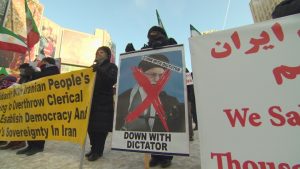 Dozens of people rallied in Yonge-Dundas Square on Saturday in support of ongoing anti-government demonstrations in Iran. Carrying Iranian flags and chanting slogans calling for peaceful regime change, Iranian-Canadians and other supporters braved the frigid temperatures to show protesters in Iran that “no matter what, we support you,” said Zahar Fallah.
Fallah is director of the International Coalition of Women Against Fundamentalism (ICWAF), the group that organized the rally. “For the protesters in Iran, we salute you. We will never forget you, we never forgot you,” she told CBC Toronto. “We are your voice here and we will be loud and clear for you, for regime change in Iran.”
Demonstrations held in Toronto in support of Iranian protests. Anti-government protests broke out in Mashhad, Iran’s second largest city, on Dec. 28 and have since spread to dozens of other cities and towns. The protests were sparked by a hike in food prices amid soaring unemployment. Some demonstrators have called for the government’s overthrow.