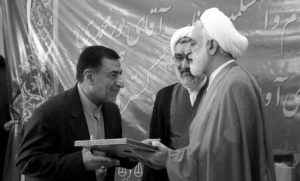 We protest against providing this criminal the opportunity to speak in Geneva, particularly with increased globalfocus on 4 decades of Iranian regime’s crimes against humanity. In the United States Congress, House Resolution 1882, and its 71 bipartisan co-sponsors have already condemned 1988 massacre. The resolution calls for justice for victims of the crime and urges the U.N. to establish a commission of inquiry. Among the distinguished co-sponsors of the measure are Chairmen Michael McCaul (R-TX) and Ed Royce (R-CA); as well as Ranking Member Elliot Engel (D-NY) and Lantos Human Rights Commission Co-Chair, James McGovern (DMA).

Additionally, in his 2017 annual report to the U.N. General Assembly, Secretary General Antonio Gutteres included a report by the Special Rapporteur on the situation of human rights in the Islamic Republic of Iran, which addresses the 1988 mass executions. During the 1988 massacre, Alireza Avaei was the Prosecutor General in the city of Dezful and Ahwaz. He was also a member of the “Death Commission” in Iran’s Khuzestan Province and responsible for these atrocities at “the UNESCO prison” in Dezful (a site listed as a candidate for World Heritage status). Eyewitnesses have described that on the order of Avaei, political prisoners, some of whom were under 18-year-old, were executed in groups of two or three in the barren backyards of that prison.

Alireza Avaei was later selected to lead regime’s Department of Justice in the provinces of Lorestan Markazi and Isfahan. From 2005 to 2014, he was also President of the Judiciary in Tehran Province, during which he was placed on the EU sanctions list. The 2011 EU sanctions scold Avaei’s for his actions as President of Tehran Judiciary, noting, “He has been responsible for human rights violations, arbitrary arrests, denials of prisoners’ rights and increase of executions.” It bears mentioning that for much of this period (as is the case today), Iran has had the highest per-capital execution rate in the world.

As the regime’s Justice Minister today, Avaei bears responsibility for the brutal suppression of popular protests in Iran, the arrest of at least 8000 people, and the torture and poisoning to death of many detainees.
Accordingly, an Avaei address at the Human Rights Council would degrade the U.N., its human rights mechanism, and sadly signal that it is turning a blind eye to one of the gravest human rights violations in modern human history.
We call on the United Nations Human Rights Council to resend its invitation to Avaei and urge it instead to consider rightful grievances of the 1988 massacre victims. We also urge the Human Rights Council to heed the U.S. Congress call for establishment of a commission of inquiry into this crime against humanity.

Alireza Avaei and others like him have a long criminal wrap sheet for which they must face justice as soon as possible.

What Makes Persian Culture So Fascinating?