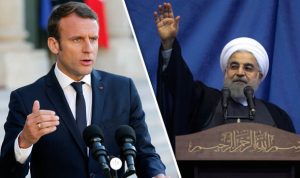 Rouhani told Macron, according to a report on Iranian state television:
“We criticize the fact that a terrorist group has a base in France and acts against the Iranian people… and we await action from the French government against this terrorist group.” He was referring to an exiled Iranian opposition group based in Paris and called the Mujahedeen-e-Khalq.

Elysee Palace Spokesperson later responded that all political refugees are welcome in France, and will be provided security by France.

Khamenei, the Supreme Leader bluntly identified the leading Iranian opposition groupthe Mujahedin-e Khalq (MEK) – as a main contributing factor. “They were prepared months ago. The media of the MEK admitted to this; they said, recently, that they were in contact with Americans some months ago, to carry out U.S.’ orders: to organize riots, meet with this or that person, find individuals inside the country to help them fan out to the people. And that it was they who initiated this,” admitted Khamenei, while at the same time, doing his best to conceal the MEK’s popular appeal by describing it as part of a “triangle of enemies” that had planned, financed, and carried out the latest uprising. January 9, 2018

Iranian Regime Authorities & Media Outlets Admit to The Role of MeK in the Recent Protests. 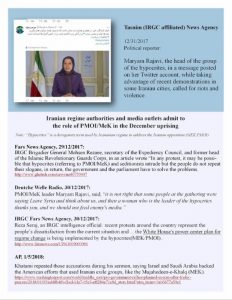 Below are some of the Main Stream Media and Iran Government Owned Media inside Iran:
Note: “Hypocrites” is a derogatory term used by Irananian regime to address the Iranian opposition (MEK/PMOI)

Reza Seraj, an IRGC intelligence official: recent protests around the country represent the people’s dissatisfaction from the current situation and … the White House’s power center plan for regime change is being implemented by the hypocrites(MEK/PMOI)..
For more:
http://www.farsnews.com/13961009000906

Maryam Rajavi, the head of the group of the hypocrites, in a message posted on her Twitter account, while taking advantage of recent demonstrations in some Iranian cities, called for riots and violence.

IRGC Brigadier General Mohsen Rezaee, secretary of the Expediency Council, and former head of the Islamic Revolutionary Guards Corps, in an article wrote “In any protest, it may be possible that hypocrites (referring to PMOI/MeK) and seditionists intrude but the people do not repeat their slogans, in return, the government and the parliament have to solve the problems.
For more:
http://www.ghatreh.com/news/nn40759407

Khatami repeated those accusations during his sermon, saying Israel and Saudi Arabia backed the American efforts that used Iranian exile groups, like the Mujahedeen-e-Khalq (MEK).
For More:
https://www.washingtonpost.com/world/middle_east/pro-government-rallies-planned-in-iran-after-friday-prayers/2018/01/05/ed48b4f6-f1ed-11e7-95e3-eff284e71c8d_story.html?utm_term=.0a06b77a59e1

PMOI/MeK leader Maryam Rajavi, said, “it is not right that some people at the gathering were saying Leave Syria and think about us, and then a woman who is the leader of the hypocrites thanks you, and we should not feed enemy’s media.”

Will 2018 Bring Revolution to Iran?

Picket line to Free All Protesters in Iran