In this photo taken by an individual not employed by the Associated Press and obtained by the AP outside Iran, university students attend a protest inside Tehran University while anti-riot Iranian police prevent them to join other protestors, in Tehran, Iran, Saturday, Dec. 30, 2017. A wave of spontaneous protests over Iran’s weak economy swept into Tehran on Saturday, with college students and others chanting against the government just hours after hard-liners held their own rally in support of the Islamic Republic’s clerical establishment. (AP Photo) 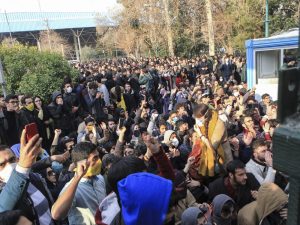