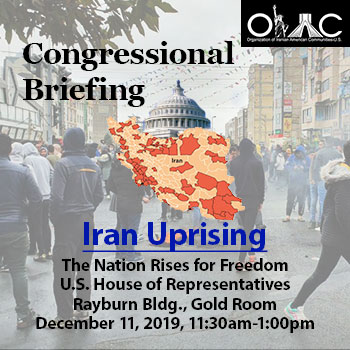 Washington, DC; December 09, 2019 – This week, bipartisan members of congress will join Iranian Americans from across the U.S. at a House Briefing to support ongoing protests in Iran and to hold the Iranian regime accountable for indiscriminate and deadly use of force. A briefing organized by the Organization of Iranian American Communities (OIAC) will be held on Wednesday, December 11th (11:30-13:00), in the Gold Room, Rayburn House Office Building.

Iranian regime has killed at least 1000 protesters and detained more than 12,000. United Nations High Commissioner for Human Rights said last week, it “has evidence that Iran was ‘shooting to kill’ protesters.” UN said that it has also seen video footage in which security forces shot “unarmed demonstrators from behind while they were running away, and shooting others directly in the face and vital organs — “in other words, shooting to kill.”

There is no question however, that Iran uprising will continue until freedom and democracy is established in Iran. Yet, with thousands of protesters in prisons, now is the time to stand on the side of the Iranian people and prevent the Iranian regime from mass killings.

The Organization of Iranian-American communities (OIAC)