Reading through Daniel Benjamin’s vitriolic, holier-than-thou, screed, against Rudy Giuliani was truly astounding. We are not in a position to defend America’s Mayor here, as his record speaks for itself and he can do that job ably. Mr. Benjamin is disingenuous and clueless in his pro-mullah attacks on the Iranian opposition movement known as the Mujahedin-e Khalq (MEK/PMOI). What we, members of Iranian American Communities, are astounded by is the depth of depravity that he and his ilk will sink to in defending their ill—gotten infamy for impeding the Iranian people’s struggles for genuine democracy by effectively aiding and abetting the sectarian Islamic theocratic despots in Iran.

Mr. Benjamin served on the same National Security Council that bargained away the FTO list to the mullahs for a moderate smile from the failed Khatami presidency in Iran. He prefers so-called moderate Iranian regime “intellectuals” who continue to dupe him about what the Iranian people hate and love than to open his eyes to the reality of Iranian’s opposition to this regime.  He sat on the same Counter-Terrorism Bureau that was called out by his Secretary of State for its senseless enmity to the MEK and its lack of strategic focus on the core of the terrorism problem that lies in Tehran and whose actions were lambasted by America’s second highest court as being “egregious.”

He laments the fall of the Shah and the MEK’s pivotal role in ousting one despot, and regrets that they also opposed the mullahs who hijacked that revolution. He sheds crocodile tears for brutal henchmen of the Iranian regime who faced justice in the upheavals resulting from their own bloody suppressions of Iranian dissenters. He finds the MEK to be “creepily” devoted to the freedom of their people and impervious to misguided foreign interventions and designs to aid the regime by dismantling their historic movement. His views are tainted and extreme in misjudging the crux of the problem in the Middle East and no wonder why the problem is worse today, because Mr. Benjamin cannot discern friend from foe.

Mr. Benjamin just doesn’t get it. The MEK was founded for lack of freedom and democracy in Iran, led the struggle against the Shah, fought off the power grab by Khomeini, continued the struggle resolutely through hell and fire, and stand today with heads high and ready to sacrifice for the Iranian people’s liberty and peace and security in the region. America standing for democratic values will stand with the MEK against the Iran regime and not vice versa as has been the unfortunate historical mistake of the original FTO listing and past 16 years of two US presidents.

Messrs. Giuliani, Bolton, Jones, Shelton, Dean, Richardson, Rendell, Dell Dailey (Benjamin’s predecessor) and et. al., were correct to stand with the MEK and they understand American interests in Iran and the region much better than Mr. Benjamin could ever hope to do, so long as he clings to justifications of his wrong policy positions in the past.

Consider the situation today: Obama’s Iran deal has generally been seen as a poor deal-making exercise where the Administration gave away all its leverage up front and got limited nuclear restraints that Tehran is already trying to violate. The nuclear arrangement is seen as having given a blank check to an alliance of anti-US forces including Iran-Russia-Assad-Hezbollah.  The incoming Administration is waking up to the realization that keeping Bashar al Assad in place will benefit Tehran and Moscow more than it will aid the fight against ISIS.  The Iran policy will have to change, including a long-overdue focus on internal human rights practices and the regime’s lack of democratic legitimacy.  That process is the most important change, and it is underway now. For the likes of Benjamin, this is extremely hard to swallow.

If Mr. Benjamin has an axe to grind, let him keep the MEK out of it, unless the axe he is grinding is against the Iranian people and opposition. If that is the case, then we can only pity him for being on the wrong side of history. There is no honor in parroting the mullahs in discredited talking points against the MEK. The MEK have proved in seven high court rulings that the propaganda that Mr. Benjamin now repeats as facts were completely baseless.

A House resolution was introduced with 99 bi-partisan co-sponsors (including chairs of the committees on Intelligence, Oversight, Armed Services and subcommittee on Terrorism) calling for the removal of the FTO designation. 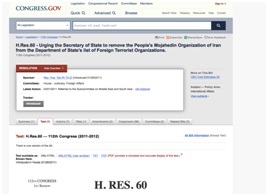