Conference on the eve of International Women’s day 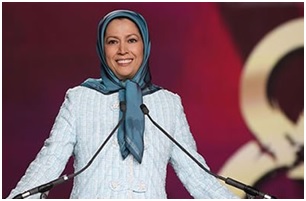 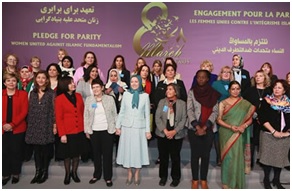 Maryam Rajavi: With women’s active and equal participation in political leadership, we will turn this century into the era of women’s emancipation

February 27, 2016 – PARIS
On Saturday, February 27, 2016, on the eve of the International Women’s Day, a grand gathering entitled, “Pledge for Parity: Women United against Fundamentalism” was held in the presence of Maryam Rajavi and a number of political dignitaries, intellectuals, prominent personalities, and activists of the equality movement from 26 countries and four continents.

In her speech to the conference, Mrs. Rajavi addressed the Iranian regime’s sham elections saying that what was held yesterday was not an election of people’s representatives. It was a competition between the incumbent and former officials in charge of torture, execution and export of terrorism; something that foiled the myth of moderation of the regime.

As such, the sham election met with repugnance of the majority of the Iranian people and especially the youth. By holding this election, Khamenei seeks to further concentrate his regime on the war in Syria and on the misogynous suppression in Iran. However, it will be the beginning of an era of unprecedented fragility and decadence of the Velayat-e Faqih and he will not be able to do away with the consequences.

She added: “Mandatory veil, is an all-inclusive and permanent tool for suppression of women. In a matter of only one year, 3.6 million women were inspected and questioned on the streets for “improper veiling” and 18,000 women were put on trial. Common practice of violence and rape against women and widespread addiction and misery of women are among products of the mullahs’ corrupt Sharia. In Iran under the rule of the mullahs, polygamy, anti-human treatment of women and girl children, sexual abuse of girl children under 9 years of age are justified and imposed on women. Velayat-e Faqih is a senseless monopoly that is confronting women’s equal rights full force. Maryam Rajavi said: They have turned Iran into a big prison for women.

She reiterated: Anything that promotes compulsion, denies people’s free choice and anything that denies women’s equal rights is not Islam but against Islam. We do not tolerate violation of women’s rights in the guise of religion or under any other pretext. In the face of extremism, fundamentalism and exploiting the religion, we advocate democratic Islam. By realization of women’s equality and their active and equal participation in political leadership, we seek to turn this century in the name of women into the era of women’s emancipation. Our plan for tomorrow’s Iran is to establish a democracy based on freedom, equality and separation of religion and state, where death penalty is abolished. Equality in basic rights and freedoms, equality before the law, economic equality, equality in the family as well as freedom of choice of clothing and active and equal participation in political leadership.

Mrs. Rajavi addressed Iranian women and said: You and your pioneering sisters in Camp Liberty can and must sweep away the mullahs’ religious tyranny and all the fundamentalist groups emanating from it under any name. You can restore freedom to Iran, peace to the region and security to the world. You deserve to take your fate in your own hands in an Iran without Velayat-e Faqih. Women of the Iranian Resistance struggle so that the people of Iran, and especially women, could be free and able to exercise their right in determining their own destiny.

The speakers discussed ways of confronting Islamic extremism as the world’s main challenge. Pointing to the successful example of the Iranian Resistance in realizing women’s equality and pioneering role in all areas of struggle against fundamentalism, they stressed on Mrs. Rajavi’s leadership.

They declared that women are the main victims of fundamentalism. With solidarity and unity of action, they can play a significant and key role in combatting this ominous phenomenon that has surpassed all geographic borders and all limits of violence, today. The grand gathering featured a performance by a Syrian child depicting the pain and suffering of the people of Syria, performances portraying executions of young Iranian women and the role of mothers of political prisoners, also the tragedy of acid attacks on young women of Iran.
A group of musicians from Albania, Mmes. Marjan and Gisoo Shakeri, renowned singers and members of the Iranian Resistance, as well as young Iranian singer, Ms. Ayda, performed in the Paris gathering.

Over 30 outstanding women delegates took to the stage this Saturday at the Pledge for Parity: Women United Against Islamic Fundamentalism conference at the ‘Espace Grande Arche’ hall in La Défense, Paris, one of the first conferences to take place in the city in the build up to International Women’s Day on March 8th. The conference brought together key personalities in the international women’s rights movement, led by the keynote speaker and President-elect of the Iranian Resistance, Maryam Rajavi.

Rajavi, having taken her seat on stage amongst other luminaries, was praised by the first speaker, Ranjana Kumari, the Director of the Centre for Social Research in India and a prominent politician. Kumari commended Rajavi’s strengths in standing up for women’s rights. After the initial speech from Kumari, Rajavi took to the stage to deliver a heartfelt speech condemning Khameini’s persecution of women; from his permittal of child marriage to his numerous executions of women.

She paid homage to her ‘sisters who were slain in recent years’, and covered topics from election fraud to institutionalized violence under the Iranian regime and the mullahs, and how Khameini permits the slavery of women through polygamy and lack of voting rights, how he values the testimony of one man as to be worth more than the testimony of two women. She then notes how fundamentalist groups hardly differ in their ideology; whether Daesh, Taliban or Boko Haram, the effect on women is the same. She ended by calling on women to aim for an end to compulsory veils, religion and government.

Special guest Linda Chavez gave a damning speech on Irans ‘so-called’ recent elections, which were denied to women voters, emphasising how women’s liberation in Iran is impossible under the current regime, and decrying the situation in a country where fifty percent of the population is ineligible to vote.
German politician Rita Sussmuth praised the strength and motivation of the people in the room, noting that when people stay silent over human rights abuses, it is as bad as committing the abuses themselves. She pressed that women are essential components in the fight for liberation, and that they should be included at the heart of the fight.

Rama Yade, French Former Secretary of State for Human Rights, spoke on the systematic social inequality that affects women and girls from a young age in Iran. From being denied the right to study to relying on their husbands for permission to do the simplest tasks, Yade emphasised the work and bravery of women working for liberation under a regime that is against them from the moment they are born.

Ingrid Betancourt, Colombian politician and presidential candidate, expanded on Yade’s speech by calling for all women and men, from whatever their backgrounds, to fight for universal human rights, saying that the fight of Iranian women is the fight of all women, no matter where they are from. She says that it is each woman’s duty to fight, no matter their cultural background.

With Nagham Ghadri, the Vice president of the Syrian National Coalition, the theme shifted slightly towards Syria, as she noted the similarities in the experiences of Syrian and Iranian women; the abuse they suffer at the hands of men, and how they experience an extra layer of systematic oppression based on their gender.
Sentiments echoed by subsequent speakers such as Anissa Boumediene (lawyer and specialist of Islam, former first lady of Algeria) and Najima Thay Thay (former Moroccan Minister of Education and Youth) was that of the importance of education- both in educating women and in allowing people to understand the exploitation of their religion in the name of fundamentalism.

Former UN rapporteur Rashida Manjoo decried the limits placed on the United Nations by economic and political factors, conceding that the lack of UN action means that violations of human rights are allowed to continue. 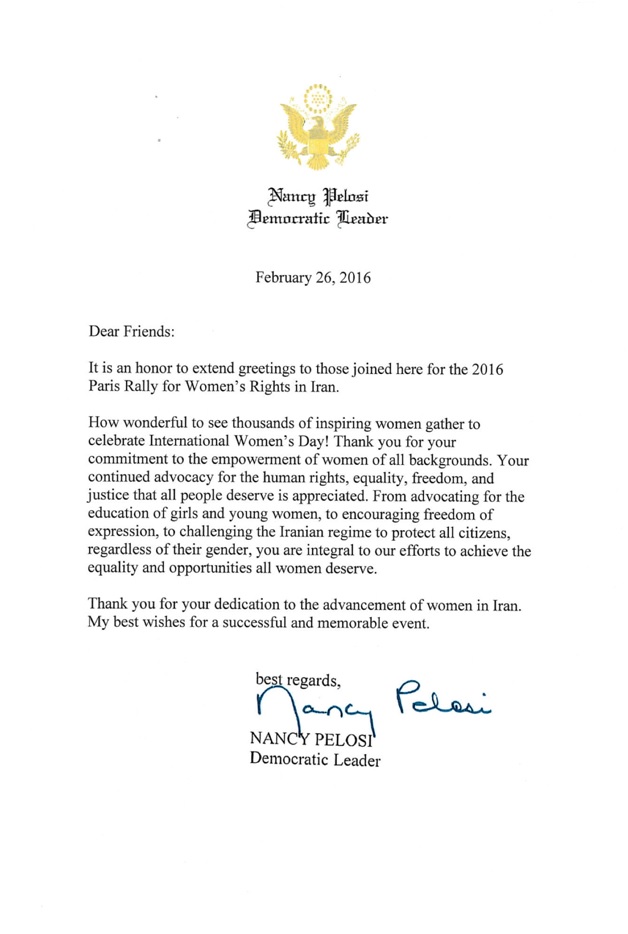 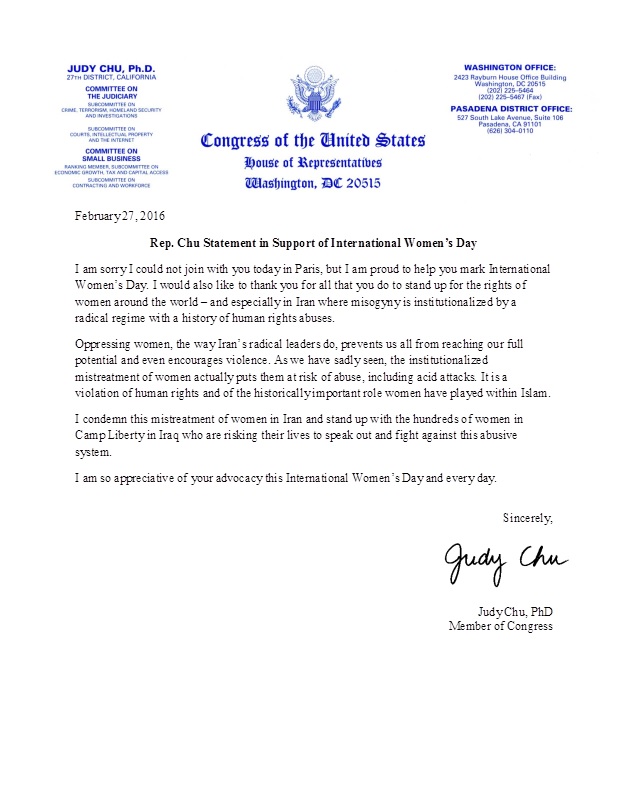 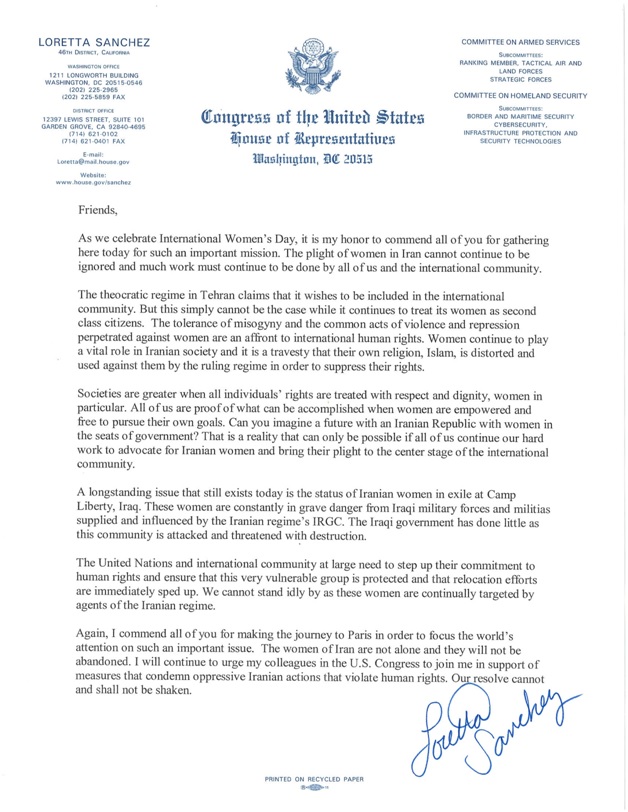